On our way home from Eufala, Country Boy and I met up with our friends Mama Shutta'Bug and Medic Man at Flagler Beach.  We stayed at the lovely White Orchid Inn & Spa for two nights enjoying the sun, sand and surf!
I woke up early one morning, partly from sleeping on another strange bed and partly because I wanted to take some pictures of the sunrise.  I was about thirty minutes early so I had time to find a good location and swat many mosquitoes.  I also realized that I needed my tripod, that was still locked in the truck.  So, I went back to our room, woke Country Boy up to ask where the truck keys were, then managed to set off the truck alarm.  Twice.  Thankfully, I don't think it woke anyone up since Country Boy said he never heard it go off.  Whew!  I mean it wasn't even 6:00 a.m. on a Sunday morning... oops!
The mosquitoes finally disappeared, my camera was on my tripod and I had a front row seat to one of God's magnificent splendors! 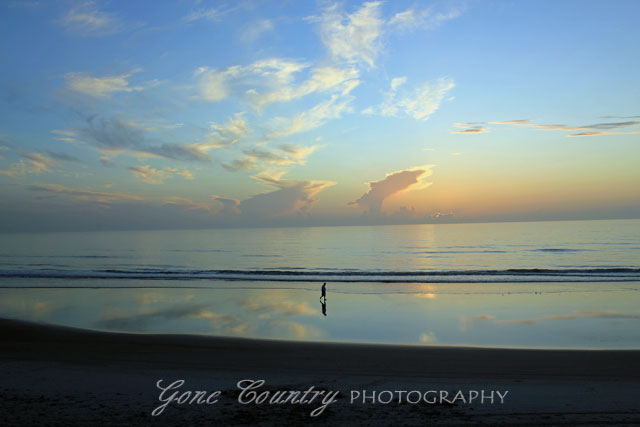 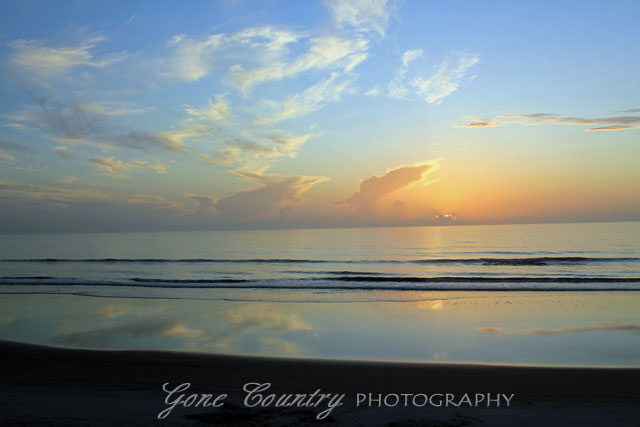 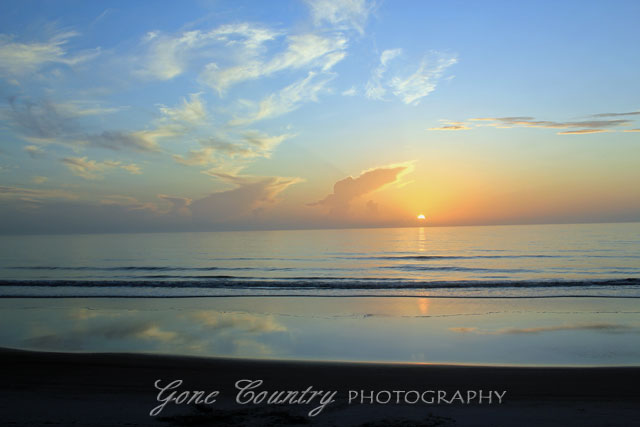 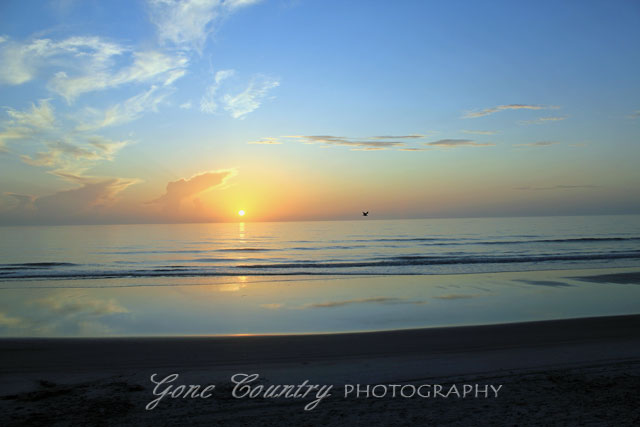 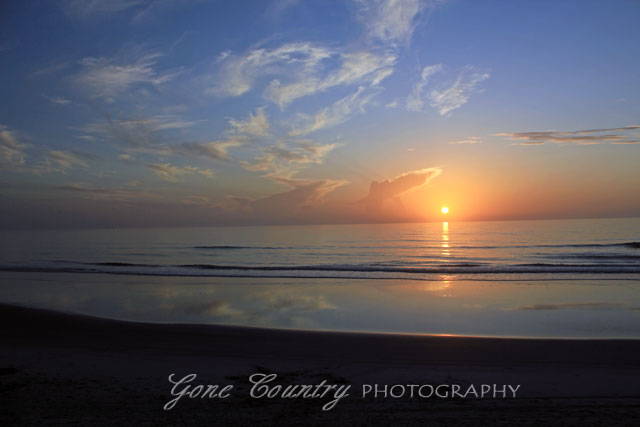 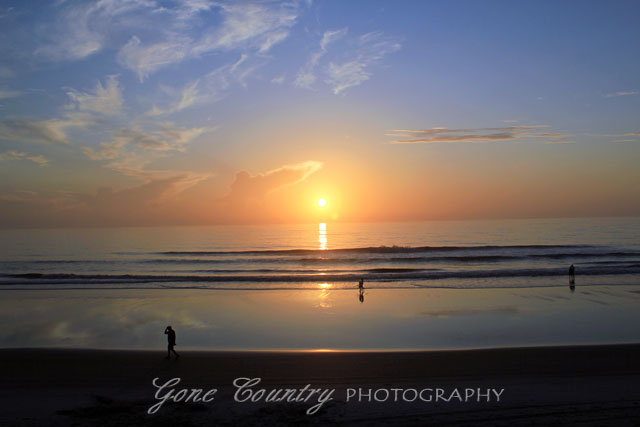 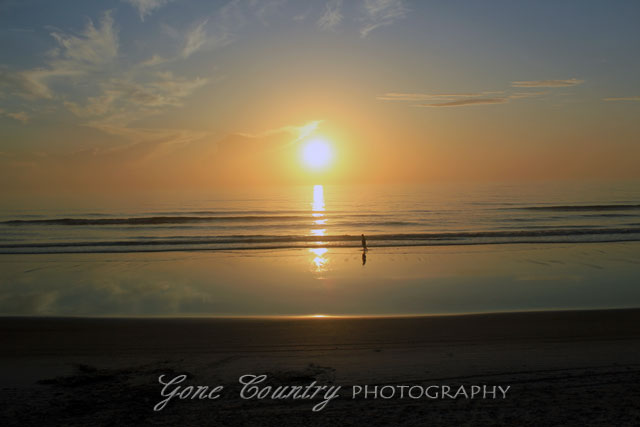 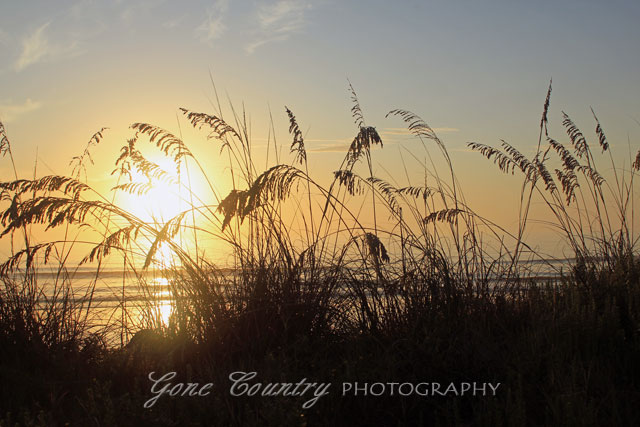 God is quite the artist!  It was so peaceful and relaxing!  I stayed out for quite awhile longer since breakfast wasn't served until 8:30.  Here are some other shots of the beach that morning... 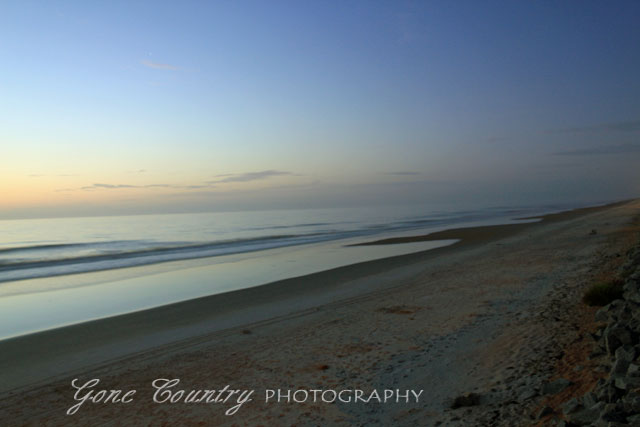 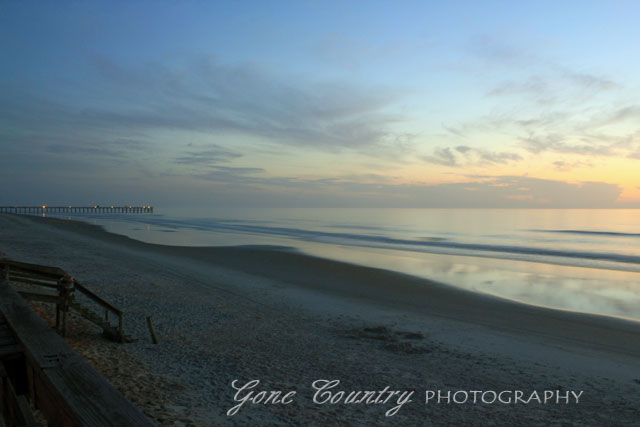 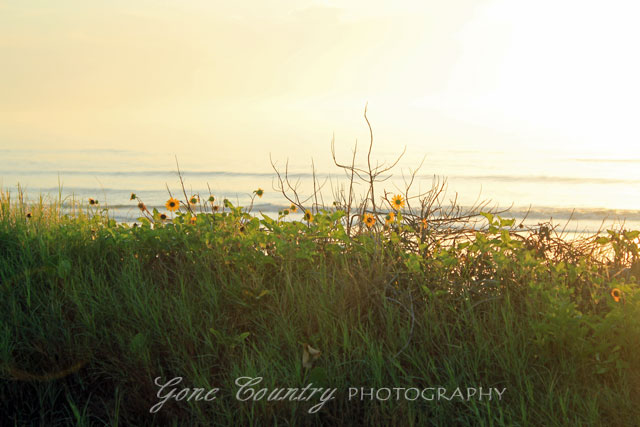 While I was taking this photo, a couple driving by stopped to tell me that a fishing boat had run ashore during the night.  They thought I might be interested in taking some photos.  The other end of the beach was still hazy but I could barely see an outline of a boat at the shoreline.  I started to head that way thinking it was maybe only a mile down the beach.  The further I walked, I realized that it was quite a ways down the beach and I probably wouldn't make it back in time for breakfast!  And coffee *smile & laugh*!  (I laugh because I drink decaf!!!)  So, I turned around and headed back to the Inn.  Country Boy was still asleep so I climbed back into bed with a book and read until it was time to go eat!
Apparently, the captain fell asleep and the boat ran aground early Sunday morning.  The boat was floated out Sunday afternoon during high tide.  Thankfully, there were no injuries or damages to the boat or beach.
Next up will be photos and stories about our day on the beach (after breakfast and coffee!).  Funny story about me and coffee.  I never drank the stuff until I got married.  I'm a hopeless romantic and I always thought it would be lovely to sit on the porch in the mornings with my hubby and have a cup of coffee.  Well, in order to do that, I had to drink coffee!  I tried drinking some of his coffee but he likes it really strong.  Ew, nothing like learning to like coffee when it was strong and dark!  So, he started adding anything he could find in the house to make it taste better!  Stuff like chocolate and marshmallows and lots of milk.  None of it helped except the milk.  We eventually got a 4 cup coffee pot so that I could make my own coffee... much weaker than his!  I gradually decreased the ratio of milk to coffee and now I'm drinking it black.  Yea, go figure!  I do enjoy my coffee now and especially iced coffee on a hot summer afternoon but I still can't drink it as strong as he does!  A common question from people who visit our house for the first time is "Why do you have two coffee pots?"!!!  We laugh and then tell them this story!  Country Boy and I do have our coffee on our front porch every morning he's home!  It's one of my favorite things!
I hope you're having a fabulous weekend!
Till next time,

and the skies and beach and shore are just lovely. thank you!

Wow! I might have to get me a tri-pod if you can get these kind of pictures. Just beautiful. I love the coffee story!

Breathtakingly beautiful! Nothing is as special as the quiet explosion of the sun rising. Thanks for posting. xo Jenny

Amazing photos. I envy you to see it in person. :)

Beautiful photos...wow, that view is spectacular!