A few evenings ago, Country Boy and I were meandering around the property checking our crops when we spotted this little guy (not the ants) chilling on the stalk of one of the green pepper plants.  (How 'bout that pepper?!) 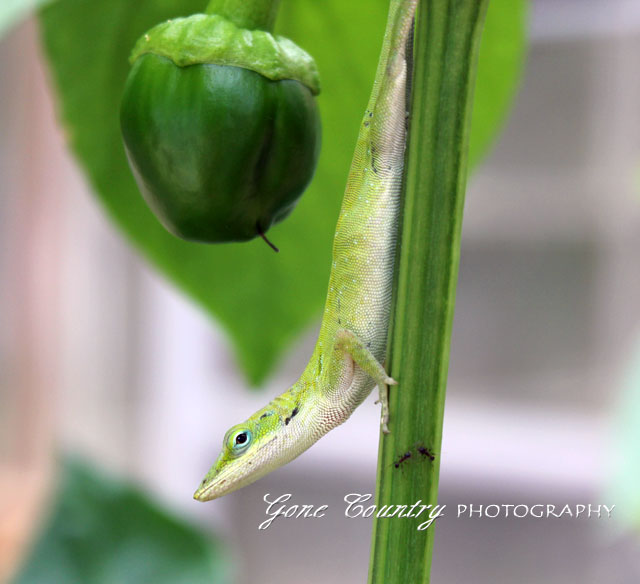 Of course, I did not have my camera on me, not even my point-n-shoot camera so, I took off running into the house (which was a site to see, I'm sure) while Country Boy occupied the little guy.  I'm not really sure what he planned on doing if the little guy decided he didn't want his picture taken but, his intentions were good!
I get back outside, huffing and puffing, and yes, I'm out of shape and keep the giggling to a low roar please, and managed to get a couple of decent shots, while gasping for air, before the little guy decided he wasn't getting paid enough to have his mug splashed all over the Internet!  Diva! 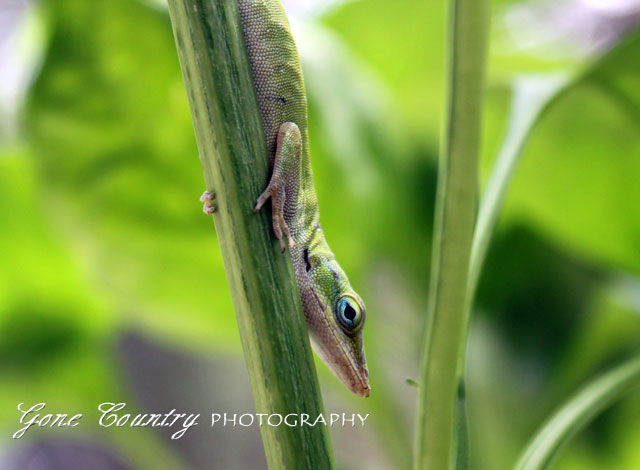 And my pepper plants?  Well, a while back I told y'all about the herbs that I planted in a wooden trough in front of the greenhouse.  I filled the trough with a lot of composted dirt as well as some new potting soil and I planted basil, dill, chives and parsley seeds.  Soon, I began to see sprouts; excitement in the air as I'm seeing some growth!  Directly, some weeds pop up and shorty after that I begin to see sprouts popping up that I know are not the herbs I planted but, they're not weeds either.  We waited and watched the leaf pattern and before long, we knew that we had bunches of pepper plants growing in my herb garden courtesy of the compost!
These are some of the healthiest pepper plants we have ever had!  My herbs?  Well, the basil and parsley are doing good but the peppers crowded out the dill and the chives.  I'm OK with that because I love peppers and these are looking good! 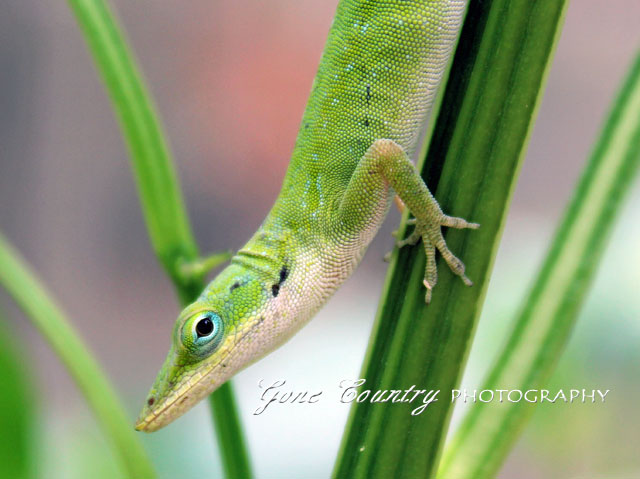 I think the blue under his eye is so cool!  Keep up the good work green pepper guardian!

gorgeous shots! glad he waited for you to get back!

Love the lizard!
He is amazing!

Now...my question is this. I think that I may be ready to move up to a real camera...as in not my point and shoot. So, I have decided to ask each of the bloggy girls that I admire the most, what camera is your favorite for a beginner who may or may not be tech challenged? ;o)

Just stopped by to relax in your backyard a second :-) Thanks for the breather :-) Tell Hunter I said hi.

I'm glad he gave you time to grab your camera! He is so pretty! I love his colors!

Beautiful! I'm glad you risked having a heart attack to get the shots! You are a trooper!

Those little green anoles are always fun to photograph. They always seem to listen when you talk to them! Beautiful photos!

Amazing pics! I'm used to seeing ants and beetles in my garden here in Ohio...along with deer and bunny prints. I would be taken a back if I saw this little fella staring back at me.

wonderful photos of the beautiful handsome guy . Love his eye too and his little fingers/ toes neato!
I am a follower! I will be back!
KAT Griffin

Love those shots of your "green pepper guardian!"