Patience Is A Virtue

... one of which I don't always have!  And, apparently, neither do some of you *heehee*!
It's been a busy, rainy weekend since my last post where I mentioned that I 'might' get brave and post a photo of me and my new 'do'!  Your comments and responses have been unanimous... that I should 'show' myself and stop 'teasing' y'all and deliver *laugh*!
As I mentioned before, it's been busy and rainy here at the homestead so I haven't been able to get a photo of the new 'do' (curly hair and rain don't mix!).  SOOooo, for those of you who have been patiently waiting, and even for those who haven't *heehee*, I thought I would end the teasing with a photo that a dear friend of mine, Mama Shutta'Bug, took a coupla' years ago while I was working as an EMT. 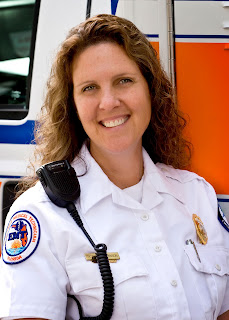 There ya' have it!  That's me!  Now ya' know!
~~~~~
I am in the midst of the LOOONNGGEST two weeks of my life.  I ordered a coupla' dozens chicks online last week.  They will be hatching next week and will be delivered between the 19th & 22nd.  Sheesh!  I've been without chickens for almost a year; having to buy store bought eggs, missing the chicken's antics and spoiling them, etc.  You'd think two weeks would be nothing.  Nope.  It's terribly long!  Have you ever seen a baby chick? They're SO cute and they getcha' right in the heart with all their little peepings & scratchings!  Which was a good thing for me.  Because I didn't want chickens.
When we first moved here, Country Boy started saying he wanted chickens.  I said No.  We don't need any chickens.  The fact of the matter was, I had no idea what to DO with chickens or how to take care of them.  I also knew that I would be the one taking care of them because, well, nobody takes care of my animals the way I do.  I'm not saying they don't do a good enough job, I just like to go above and beyond.  OK, so yea.  Maybe I am saying they don't do it good enough *heehee*.  That's OK, Country Boy doesn't seem to mind!
Well, one day, we were in a bookstore (one of my favorite places, not-so-much for Country Boy!), and I saw a book on Backyard Chickens.  I bought it.  I started reading it.  And, when chick season rolled around.  We had a dozen chicks!  Yea, I'm a sucker for animals!  By the end of last year, we had 45 hens and two roosters.  We STILL couldn't keep up with the demand for our girls' eggs between work, church and family.  Thankfully, the neighbors stopped buying them from us (which is a whole 'nother story that isn't worth going into... too much drama).  My house also has a chicken or rooster of some sort in every room.  Yea, I like chickens!
Aren't they adorable!
Due to Country Boy's questionable job situation, we ended up selling all the chickens.  A very sad day here on the homestead.  But, now that things are squared away, it's time to get some chickens again.  I decided to order them online so that the girls would be laying eggs by the time chick season rolled around again.  Six months is long enough to wait for fresh eggs... I didn't want to have to wait another year!
I'm usually not one to rush time or wish my life away, but these next two weeks can fly by and it would be OK with me!
Till next time,

and i do remember when you got rid of all your chickens. glad you're able to get another crew going again!

My girls are a highlight of my day. They greet me every morning and then when I come home and get out of the car they all come running over begging for me to throw some scratch to them. They are fat and happy enjoying their free ranging days.

I just love them so I fully understand you missing them and your anticipation of them coming!
Tracy

So now you will be able to post chick photos and nobody will care about your photo:-)) You're off the hook!

Love the photo!! Pretty, just like I thought you'd be! (Lovely on the inside and out)

I have wanted egg laying hens for some time, but my hunny won't hear of it. :(

Glad you're getting some chicks back on your homestead.

Now was that so bad?
It's so much nicer when we have a face to go with a blogger!
You look beautiful...
Thanks for sharing~
XO

Well, aren't you just a cutie pie! Great to see the face behind the blog.

What kind of chickens did your order? :)

Pleased to meet you :)

The peeps are so cute. I have always wanted to raise chickens, but haven't taken the plunge. I think I'm waiting for retirement when I have fewer demands on my time.

I didn't realize you'd been an EMT. That's a tough job.