The girls are growing up.  They are starting to fly up to the lowest roost in the coop and just today, one or two of them jumped into the nest boxes to check them out... not yet, girls, you have about five more months before you need a nest box!
Since they've been very active during their play times in the coop, I decided to open the door that leads to the chicken run. 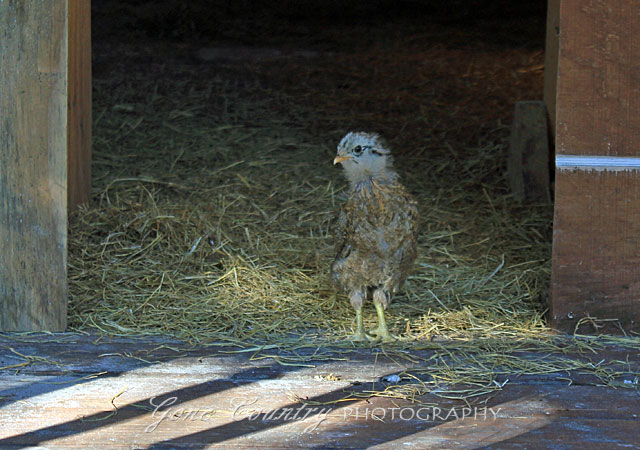 Talk about being chicken!  I know where the term comes from now *laugh*!  They would stand right at the edge of the porch for the longest time.  Eventually, one would get brave and step across the imaginary line! 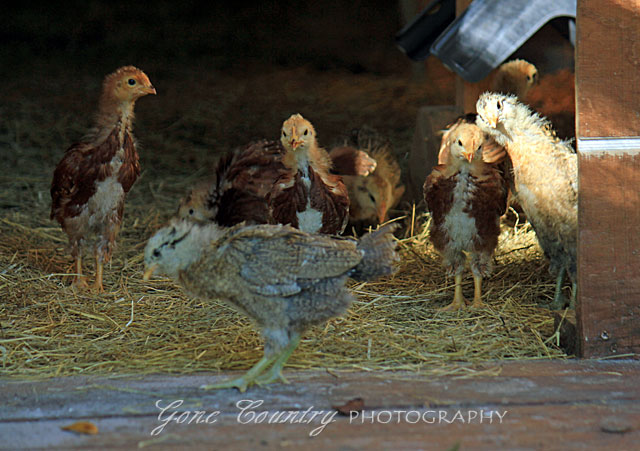 They're waiting to see if that brave girl survives!  I love the one 'peeking' around the wall!

Some of the girls are looking pretty rough right now. Checking out a leaf. 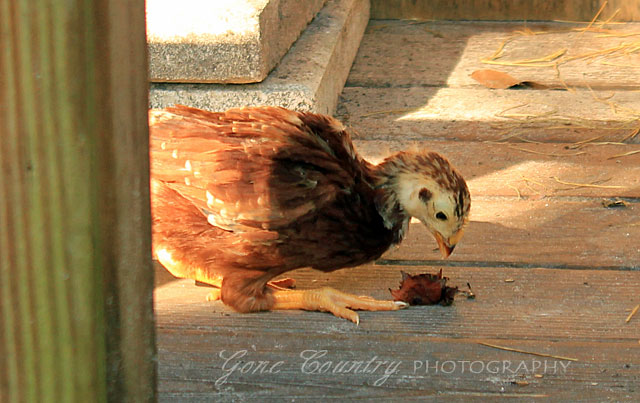 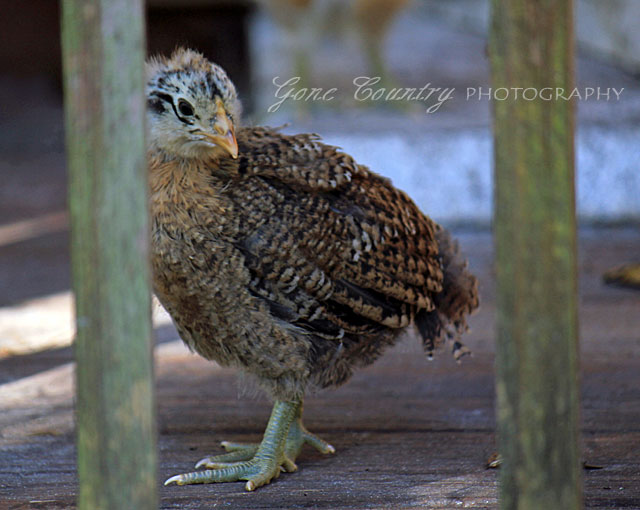 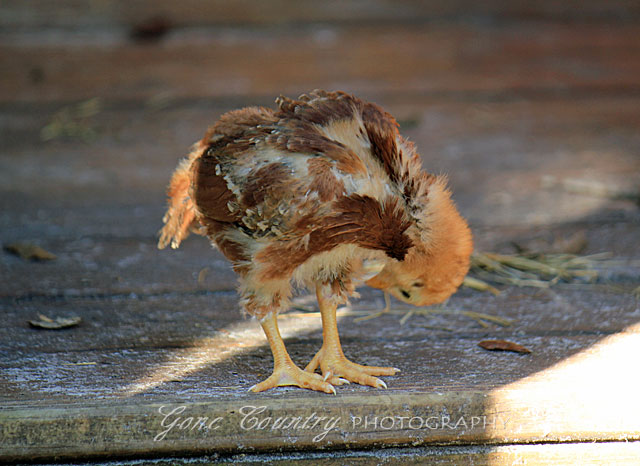 I have a feeling the chick below may be a rooster.  It's the only one whose coloring is different (besides Miss Shirley, the rare, exotic chick the hatchery sent us) and it's a tad larger than the others.  Time will tell! 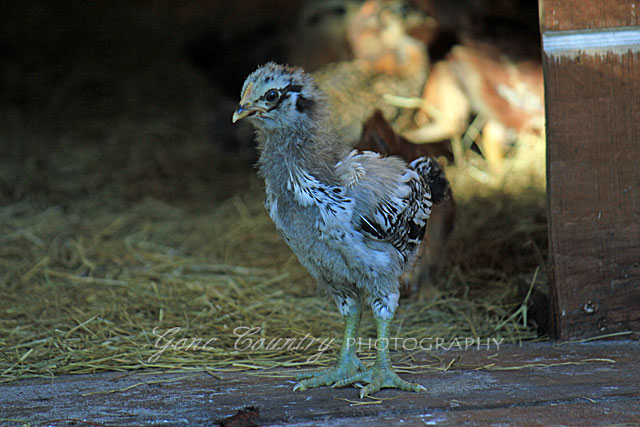 Look at those thick legs compared to the other girl.... hmmm! 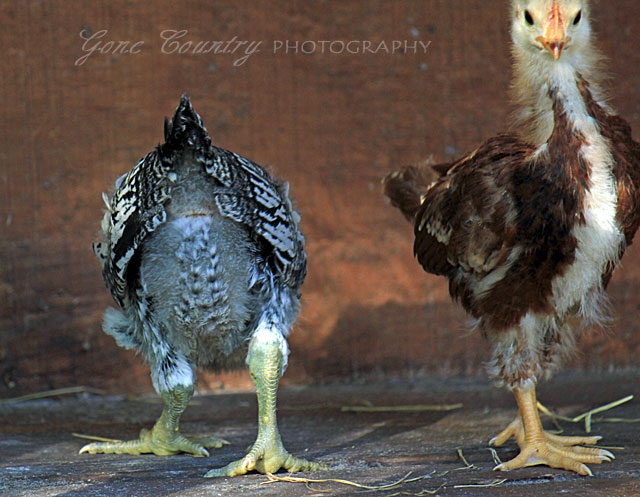 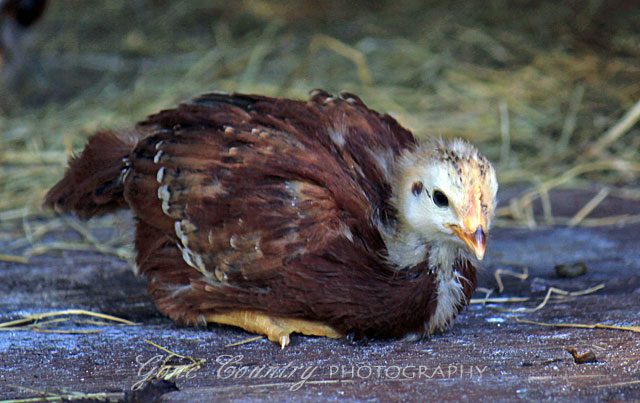 Several of them have walked right off the end of the porch because they were looking at me!  They're always shocked and they stand perfectly still like a statue for a few seconds until they realize they're still alive. 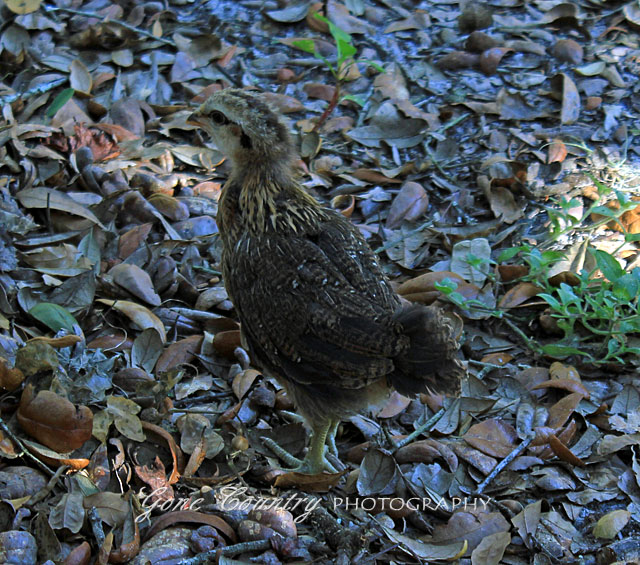 The dry, crunchy leaves probably feel quite strange to them.  After a bit, they'll hop back onto the porch. 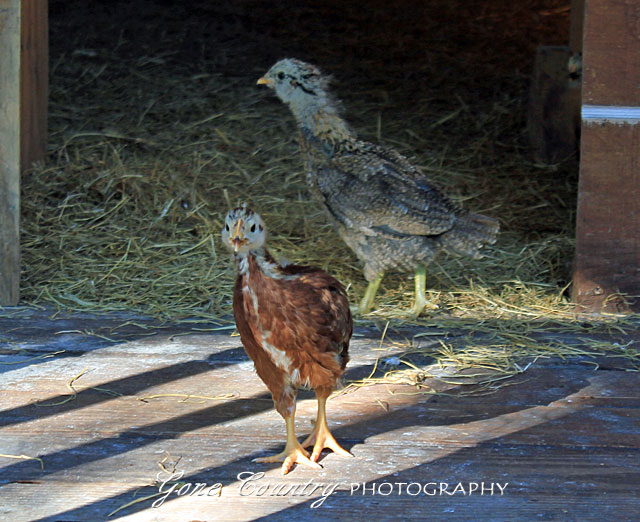 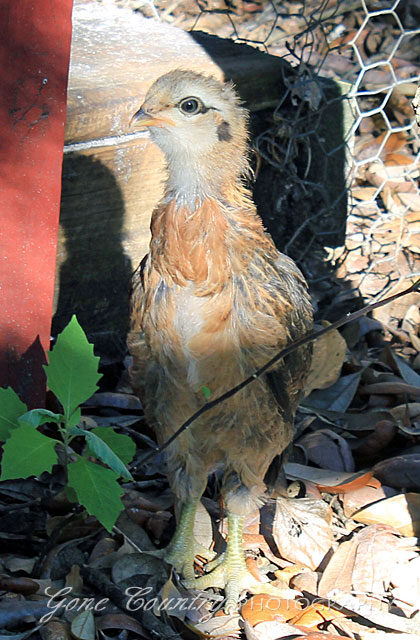 After exploring and playing on the porch for awhile, it's time to go back inside for a nap!  Eat, sleep, poop, and play all day long! 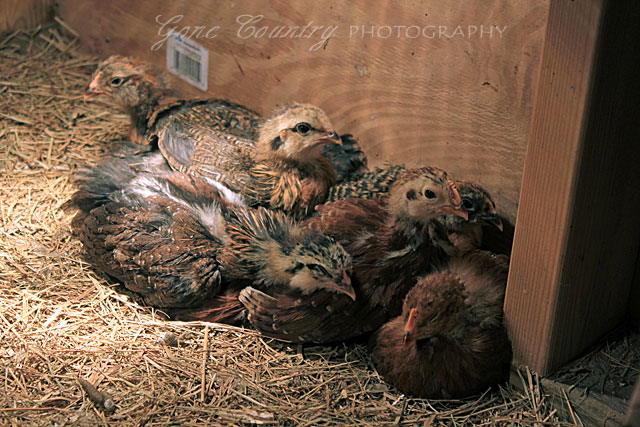 I'm hoping one day they'll get brave enough to go beyond the porch!  Then again, they are chickens!  "We must be cautious!" they say.  I say, "what a bunch of chickens!"
I've enjoyed watching them become big girls these past 3 1/2 weeks and am looking forward to watching them become bigger girls over the next several months!  They're so entertaining!
Till next time,

Email ThisBlogThis!Share to TwitterShare to FacebookShare to Pinterest
Labels: chicks

they are so cute! love their expressions. :)

Fantastic photos love the way you captured them in the photos and thw wording to them. They are growing fast. Have a wonderful evening.

They grow up so fast! Cute pictures :-)

They are still cute and your photos of them are amazing!!

lol you got some good pictures of them. They are so cute!

Such brave little girls they are! I love it when they're in that "moth-eaten" stage! Can't help but love them.

Looks like they're going through their ugly stage but with such cute antics as they're getting acquainted with their world.

They are adorable! I can tell you're enjoying this chicken thing again ;) Have fun! They do grow so fast! -Tammy

They sure have grown a lot since we last saw them! I love how they're peeking around as the brave girl ventures out. haha