Oh, My Achin' Back & Thankful

I'm slouching in the chair at the table on my front porch while writing this post because my back is not happy with me at the moment.  Meanwhile, Hunter is acting like a squirrel and climbing higher and higher up a tree.  Silly cat!

It was a busy, busy day today.

I started off by tackling something I've never done before... hooking up our small flat trailer to the back of my Amigo.  I had to take our riding mower in to be serviced.  The thing wouldn't start and the grass is getting knee high to a grasshopper.

Thankfully, I managed to get it hooked up without any problems.

Next up, loading the non-starting riding mower onto the trailer.  I put it in neutral and pushed it out of the barn.  I put a piece of plywood down onto the trailer to make a ramp.  It was barely wide enough, yikes!  Could be tricky trying to push from behind hoping that the steering wheel stayed straight.

Thankfully (again), a neighbor was coming up the drive with his tractor and a load of mulch for me that he got from the county for free.  Yay, perfect timing.  He had offered to help me a while back in loading it but I didn't want to bother him because I know he's busy.  But, since he was already here, it went much easier.  He steered and I pushed the mower up the ramp.  Then, he secured it to the trailer and I was ready to hit the road.

I took the mower to a shop in town where a young man unloaded it by simply lifting the back end of the mower off the trailer and then the front end.  Showoff!  I then headed to another town to a farm supply store to buy some line posts and poultry netting (chicken wire) for the chicken/duck expansion project.

After getting it home, I tried backing the trailer up but didn't do so good.  So, I drove around the house to get to where I needed to be and unloaded the trailer.

Now, I still needed to back the trailer closer to the barn since I couldn't leave it where it was.  Sigh!

Thankfully (yet again), I did much better this time and actually got the trailer back to its original position.  Don't ask me how or why the second time was better than the first 'cuz I have no idea!

After I got into some work clothes (which I should've done BEFORE unloading the trailer...) I started cleaning the duck pool.  The chickens and ducks know the routine now so they don't get quite as excited as they used to whenever I clean the pool.  Thank goodness!  You'da thought they were going to be supper that night.  If they only knew that Chicken Mama doesn't care for meat very much!

While the pool was emptying, I saw this lady bug on one of my potato plants so I went inside and grabbed the camera. 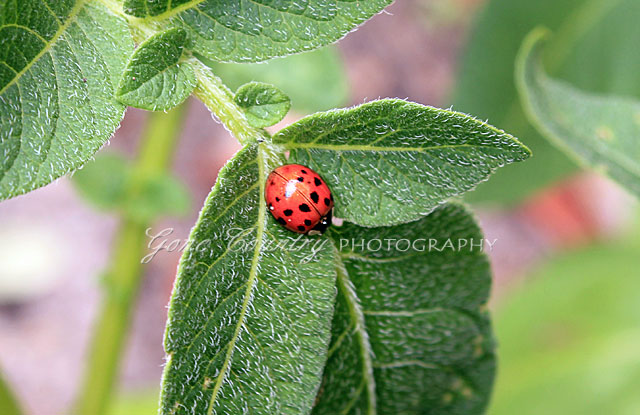 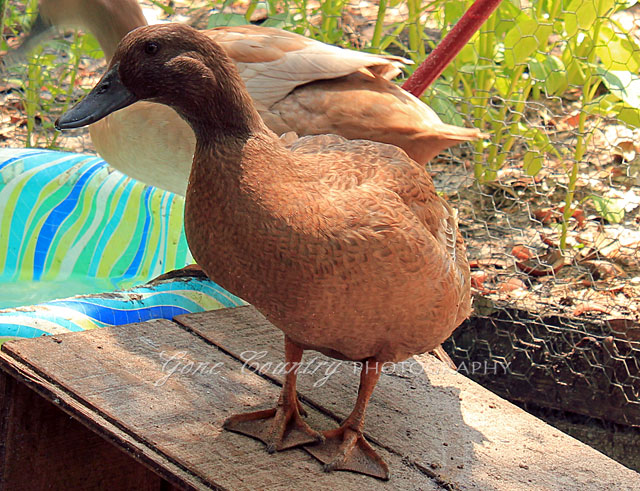 After I finished with the duck pool I decided I wanted to start putting the mulch down in the new flower bed that is part of the front yard transformation.

Before I could do that though, I needed to do some serious weeding.

The weeds I'm pulling is mostly what little grass was growing in the area that I designated for the flower bed.  I tried pulling some of the grass out but found out that it was just snapping off and the roots were still in the ground.  If I don't want to be pulling weeds every other day then I'd better get the roots!

I got two empty kitty litter buckets.  I turned one upside down to sit on and the other I used to throw the grass/weeds in to give to the ducks and chickens later.  I also grabbed a root grabbing tool from the greenhouse to help me lift the roots out of the ground.

The sky was threatening with rain so I was trying to get as much done as possible so that the mulch would help keep the ground wet.

After a couple of hours of weeding and mulching, my hands and back were starting to complain about being bent over yanking weeds out of the ground.

Thankfully (yet again still), it did start to rain so I went inside, grabbed a root beer and slouched my achin' back in a chair on the porch for a few minutes while it rained.

And I mean it was a very few minutes because the rain stopped.  Sigh.  We need rain.

So, after finishing up my root beer, I headed back out, much to my back and hands chagrin.  I worked for another hour and couldn't take my achin' back anymore.

I have three-fourths of it done so I can't complain.  My back is doing enough of that already!

The young man at the mower shop called and said it was indeed the solenoid which is what Country Boy thought was wrong with it.  He is going to fix the problem, change the oil and the spark plug, sharpen the blade and basically make sure it's running in tip-top shape for barely $100 bucks.  I was a happy girl!

I'm going to pick it up in the morning.  On the trailer that I successfully put back in its place.  Oh well, I hope I do better at backing it up tomorrow!

I guess my excuses for not mowing the yard are all gone now.  Just kidding.  I really don't mind mowing although it's a filthy, dusty job if it hasn't rained in a while...

I've also got an order for ten more dish cloths that I've got to get crankin' on!

Mercy this is getting long so I'll sign off; if you guys are even still around, hahaha!

Wishing you a lovely evening!

I guess you should be glad it hasn't rained in a while or your yard would be wilderness. :) but glad you'll have a mower again. :)

Your ducks are soooo sweet! Hubby does all of our lawn work... oh, I pull a weed here and there, but mostly I stick to the indoor maintenance... :-))

Hope the back gets better soon... use one of those Thermacare wraps. They work wonders!

What a day...no wonder your back is aching....I'm surprised it didn't ache before...or wouldn't you stop in case it did? I am hopeless at reversing trailers. I used to drive the trailers when we were on silage and they were short handed...and no matter who shouted 'left hand down' or 'right hand down' they always went their own silly way!! Well done! I think you should be awarded...'The Reversing Trailer Award' Joan

Great post! I have to mow today and I don't really mind it either -- except when it's windy and the grass gets blown back in your face. Lol. Take care of that back!

Indeed, much to be thankful for. I love the ladybug photograph; and don't get me started about weeding....sigh

I missed this post somehow :(
Sorry your back is bothering you...you did a lot of work, girl!
I love that ladybug photo - that is calendar material!