Back when I had satellite TV, I used to love watching any show involving a makeover.  They start by showing you the before, some of the process of the makeover, all building up to the big reveal.  It never ceased to amaze me how different the before and after images were.

So, I'll refresh your memory on the 'before' images of the duck pond... 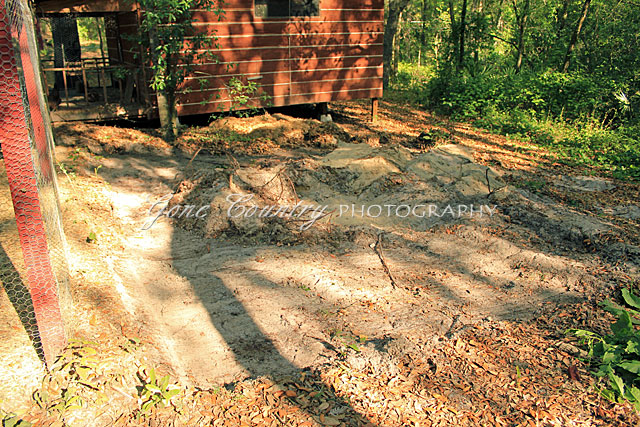 A neighbor came over with his tractor and he did a bit of grading for me and he started digging the hole for the pond.

The rest of the pond was dug by hand.

I ordered a 14x14 pond liner so Dad and I dug a 10x10 hole about a foot and a half deep adding a drain near the back part of the hole.  We took great measure to ensure that the pond was level on all four sides because we were already working on a slope and I did not want a lopsided pond! 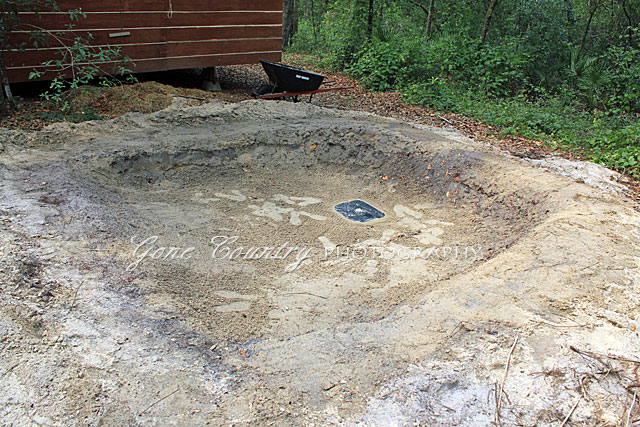 Next, I dug a trench along the base of the coop to bury the chicken wire.  This is to keep the varmints that like to eat chickens OUT!  (This was done on the other two sides of the enclosure as well.) 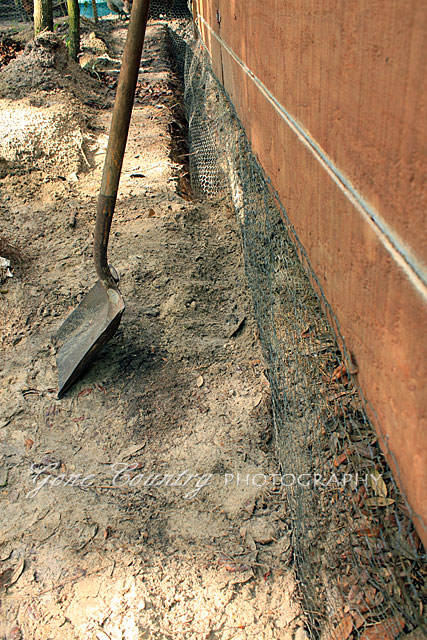 We then started working on the enclosure.

To save money on the cost of this project, I decided to go with a hoop system similar to those used in making greenhouses rather than using expensive pressure treated lumber. 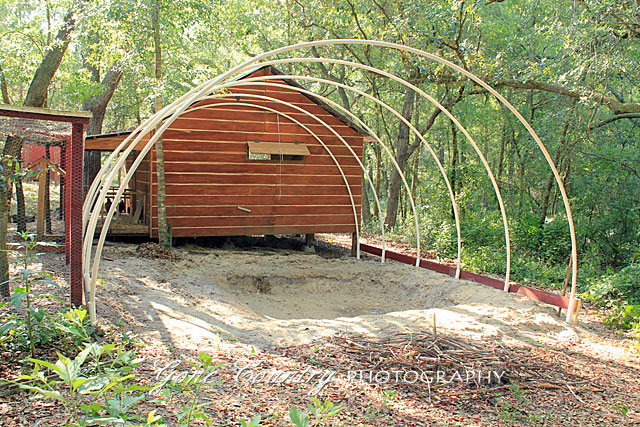 (See that pile of brown sticks in the bottom of the above photo?  Those are some of the roots we hit while digging, ugh.)  Once the hoops were in place then came the fun part... putting chicken wire over the hoops.

Thankfully, a couple of neighbors came by to lend us a hand.  What a job that was! 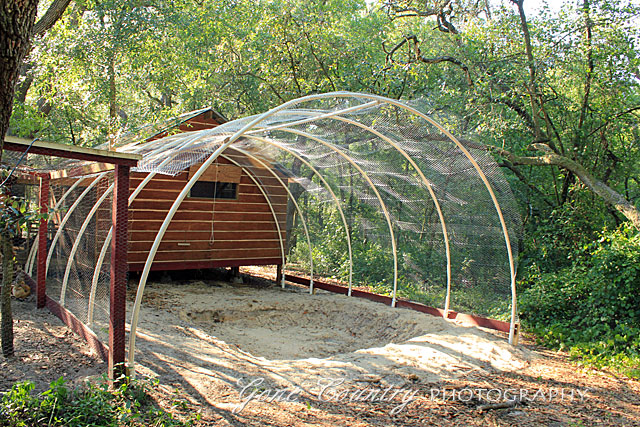 Before we closed up the end, I hauled ten or more wheelbarrows full of rocks from around the property and placed them in the far corner.

Now it's time to get this project DONE!  Or so we thought...

I grabbed the pond liner that I had received a couple weeks prior but never really looked at it.  What was sent to me was a 10x13 pond liner.  Yikes!  (And, of course, I had just recently thrown the shipping paperwork out, sigh.)

The hole we dug is WAY too big now.  Length wise was OK but the width needed to be smaller.  We decided to rake in some of the dirt piled on one side.

Remember the painstaking measures done to make it level?  Yea, it was no longer level.  In hind sight, we should've raked dirt in on both sides.

Once we fixed the pond size we went to work framing out the door from the existing chicken run into the new enclosure...

and then we closed the end with chicken wire.  Tada! 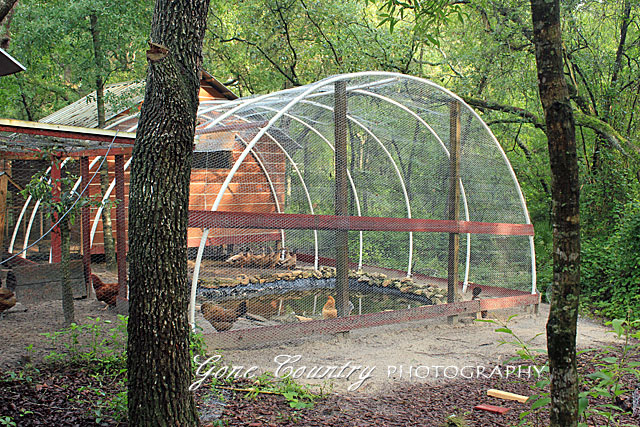 (See the ducks in the back corner?  That's where they stayed.  Like duck decoys.)

You can see here how the water looks like it's leaning towards the right.  So NOT level, sigh. 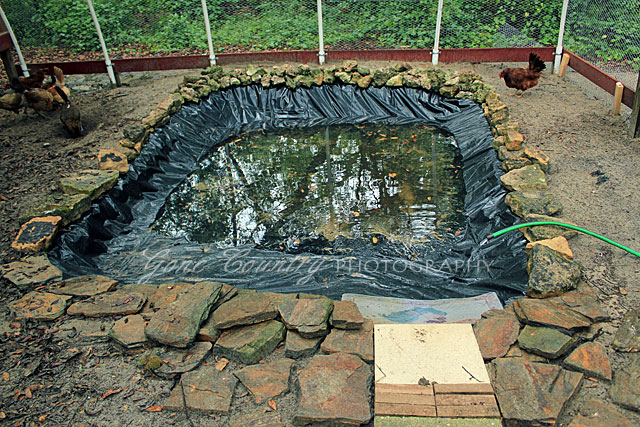 The enclosure may be finished but, the story is NOT over.  (Go get a refill!)

Once the pond finished filling up and the hose was put away, I chased the ducks into the new area (which might very well have won me $10,000 on Funniest Home Videos), grabbed my camera, and waited for a couple of hours (yes, I said hours) to capture the ducks joyously jumping in to their new pond.

Every time I went outside and looked at the lopsided pond with no ducks in it, I got discouraged.  All that work for nothing.

The chickens had no problem finding the doorway and went back and forth all day long.  The ducks?  They stood around looking like they were wondering why they were in trouble because their pool was gone and they can't go swimming anymore.

I decided to put the ducks' old pool in the new enclosure next to the pond in hopes that they would get the idea that this is where they are supposed to swim now.  So, for the next five days, I chased them through the new doorway and into the new enclosure.  I did this several times a day, back to the old run so they could eat and drink and then back into the new area so they could swim.  Or stand around as it turns out!

They eventually got into their pool and they were happy again but they still had trouble finding the doorway.

I have to admit that I questioned God as to why He didn't give the ducks a few more brain cells!

Then one day, I chased them over there in the morning, was gone most of the day, and when I came home, lo and behold, they had found their way back to the old enclosure.  Progress!

Now if I could just get them to go swimming in the new pond.

The lopsided pond still bothered me and I didn't like the way it looked so I decided to try and fix it.  What another big job!  And the chickens are NO help.  As fast as I raked they were right beside me raking it back, sigh!

I wanted to have a more natural looking pond so I decided to make a 'shelf' for the rocks to sit on and have the liner form a lip behind the rocks to keep the water in.  So, I removed the rocks around three sides of the pond and started moving dirt around dropping one side, raising the other and making a shelf at the same time.

I got the back side done and was coming down the sides placing the rocks when I ran out of daylight.

When I was able to get back to the project a couple of days later, the chickens had completely destroyed all the work I had done and had shifted the liner so that half the water had drained out.  Sigh!

Time to start over.  Since the water level was lower, I put on my muck boots and got in the pond.  It was a lot easier moving dirt and working that way but it made it more difficult to see if I was getting the pond level or not.

I also wanted to rework the front side of the pond.  I originally had it sloped so that the ducks could walk in and out.  But, when I tried to place some rocks on the slope so that the ducks wouldn't puncture the liner, they just kept sliding down.

Speaking of sliding down, I had placed an old spongy kitchen mat on the part of the slope where I thought the ducks would go in and out since the rocks wouldn't stay put.  Well, dumb me stepped on the mat while getting into the pond and it slid out from under me and down I went halfway into the pond feeling immediate pain in the arm I had put out to brace my fall.  Being a former EMT, I sat there (in the pond) and did a quick assessment of my arm, decided it was not broken but partially dislocated so I waited until it popped back in, stood up and got back to work.  (My arm/shoulder is still sore today.)

I started moving all the rocks off the sloped side of the pond so that I could rework the ground underneath.  When I got to the area where I had fallen this is what I found underneath the rocks... 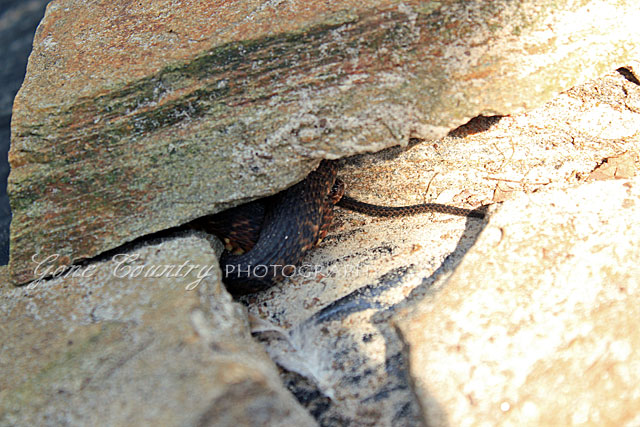 A Florida Banded Water Snake.  A non-venomous snake and NOT to be confused with a Water Moccasin which is venomous. 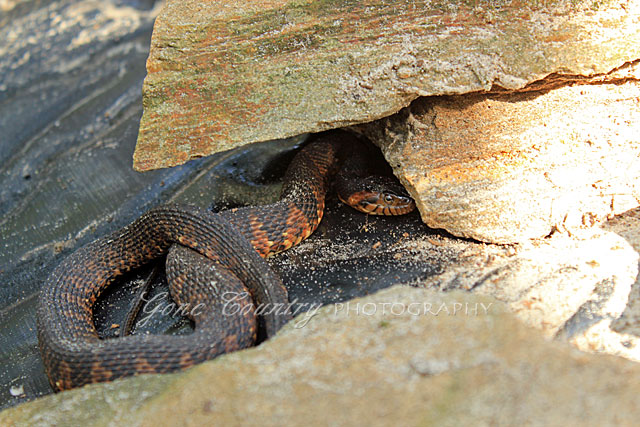 This snake was non-aggressive and just wanted to hide from me whereas Water Moccasins are aggressive. 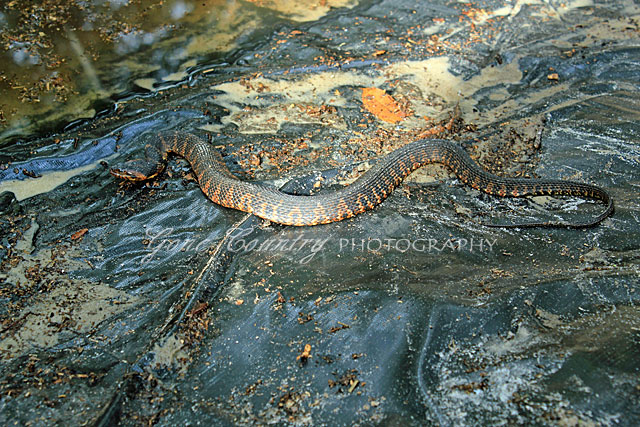 In trying to hide from me he started to slide down the liner (seems to be a lot of that going on, ha!) but when the chickens noticed him, he decided to get in the water.  Which is where he stayed the rest of the day.  Smart snake! 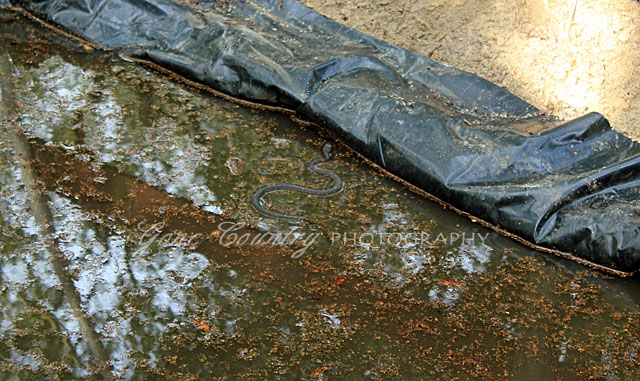 It really surprised me to find him there.  I have moved rocks all over this property, always being careful and watchful for snakes but never found any.  But here, INSIDE, the chicken and duck run, where you wouldn't think a snake would venture for fear of being eaten or at least pecked to death, there's a snake.  Go figure.

Needless to say, I got discouraged again after seeing the snake and was wondering if I should just forget about the pond.

Country Boy encouraged me to keep at it since I've worked so hard and wished he was able to help.

That evening as I was headed out to do the evening chores, I thought I caught the ducks, out of the corner of my eye, climbing out of the pond.

Are they swimming in the pond with the snake in it?  Say it isn't so!

I decided then and there to finish the pond once and for all (after the snake was gone, of course, and, thankfully, he left sometime in the night.)

The ducks were, indeed, in the pond so yesterday, I got back at it.  I managed to get the last rock in place and all the tools put away before the rains came! 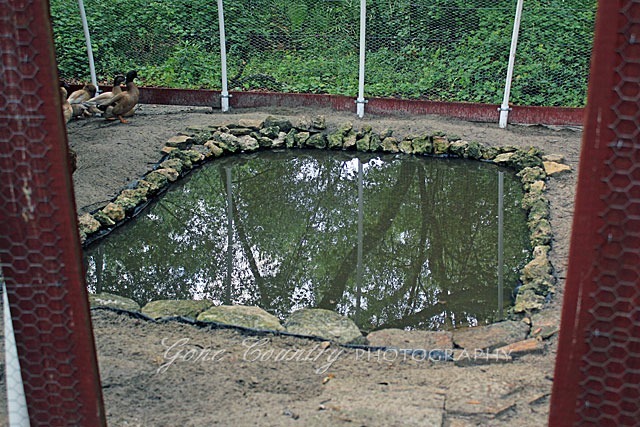 I'm happy now that it's not lopsided anymore and looks more natural! 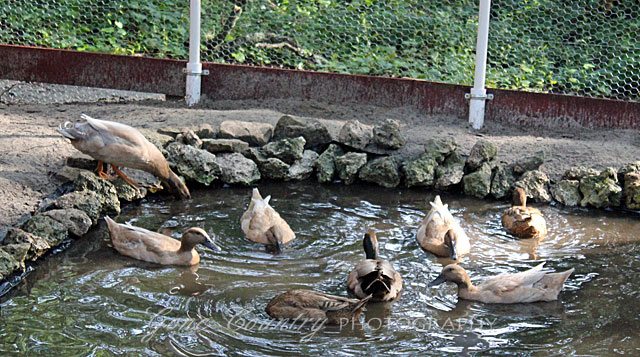 ...makes all the heartache and work worth it!

Eight days after the pond was originally filled the ducks are finally enjoying it!

thank goodness, those pea-brained goofs figured it out!!! heaven!

"pea-brained goofs" ROFL! Couldn't have said it better myself! YAY for the PBG's!

That's a wonderful enclosure, well worth all the problems!

How fun! Looks like it was well worth the time. :)

Just takes time for animals to figure things out when theres a change in routine lol. Pond and coop look great lots of hard work but I bet they love it . I though it was a awesome post and photos ! Have a good day !

Well as my husband would say... "there's just not a whole lot of neurons firing in those ducks' brains".

Glad after all that that the duckies are happy with the pond! You worked sooo hard on getting it perfect for them.

As oou & Dad described your workings as you went along I couldn't picture it at all. How great it turned out so I say PTL! for the finished project.

It looks wonderful! Such a lovely lovely job you and your dad did! I know the ducks and chickens too, are enjoying their new space!

You guys have created a wonderful little haven! Congrats on a job well done. I enjoyed the "reveal". :)