It's been over five weeks since LizzieBelle came
to live here on the wanna-be homestead and farm.

We've enjoyed getting to know each other and have
quickly fallen into a routine that works for us.

She's such a sweetie-pie.

I just can NOT get over her sweet disposition and temperament.

And, she's not a barker unless someone comes to the door, yay! 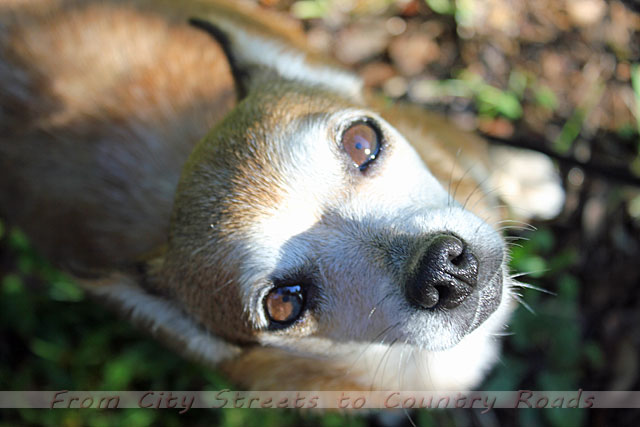 She's had one heart worm treatment.

The fleas and tapeworms are gone and her hair is slowly growing in the bare spots.

Then again, y'all know all that from the last update.

What you didn't know is that I found out last weekend that she's pregnant! 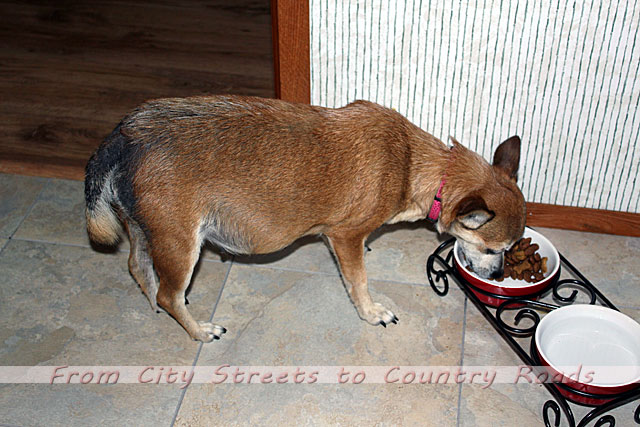 At first I thought her healthy appetite and weight
gain was because the tape worms were gone.

Then I realized that the weight gain was not an all
over weight gain but in a localized area.

I was concerned about her ability to carry and have the puppies
because of the heart worms so I took her to the vet last weekend
where it was confirmed that she is pregnant.  The vet said that her body
is adapting to being pregnant and she's handling it just fine.

I was also concerned about the medications she's on and how they would affect the puppies.

We stopped the antibiotics she was taking that helps to get rid of the
heart worms from the first treatment and we've also stopped
giving her the heart worm pill.

Once the puppies are born (and possibly even weaned) then the
heart worm treatments will resume. 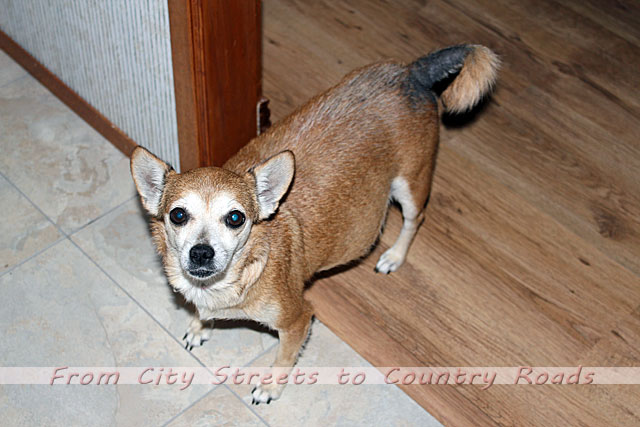 I have no idea what breed of dog(s) bred with her nor do I know when.

I do know that she was at the end of her heat cycle when I got her. 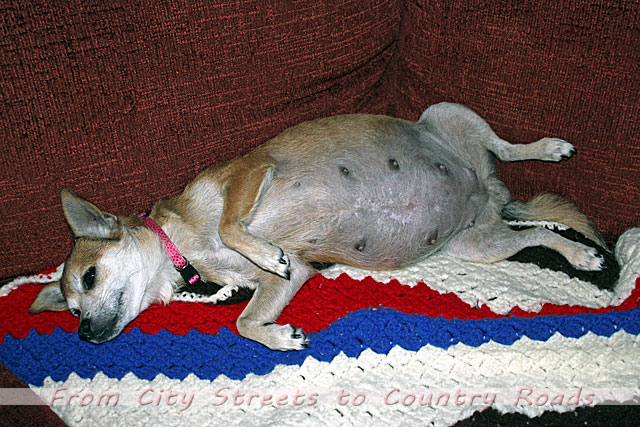 But, from doing a little math from the time frame that I've had her,
my guess is that we'll be having some puppies
in the house possibly as soon as some time next week.

This morning she weighed 14.6 lbs!  I hope she doesn't gain too much more.

Say a little prayer for us that all goes well during the births.

Never a dull moment here at the wanna-be homestead and farm!

So glad she has you to care for her. I hope her pups are healthy and you'll be able to find good homes for them when the time comes. She's such a sweet little girl!

oh dear! i'd be worried about the delivery, too, as well as the heartworm treatment and meds! hope all goes well for her and the pups, too!

As round as that belly is and if you have had her less than 6 weeks, I would be worried about the size of those pups since gestation period is 9 weeks. Hope after all the expenses you have put in on her that a caesarian section is not called for. Good luck, she is very lucky to have a very caring home.

Oh my gosh!! She was doing so well and now she'll have to go through this which can't be easy while battling heartworms. I will say a prayer for her right now. Bless her little heart. I so admire your dedication and the good care you are giving her.

I've read that food grade diatomaceous earth (DE) will kill heartworms. It kills them mechanically, not by poison. The DE has microscopic daggers that Damage worms and cause them to dry out. I believe it's safe for the pups too. I'm no authority, but we use it on our animals. MUST be food grade, not garden kind. Search online and see what you can find. It would be a non-toxic way to worm her plus it would give her lots of minerals. I'm not a doctor or vet- just a farm wife:)

Bless her little heart!! I'm so glad she found her way to your house and your heart! Can't wait to hear about the puppies.

That's quite the mommy tummy. Hope all goes well for her and the pups! Puppies are so much fun.. work, but fun!

WOW. Things surely aren't boring or stagnant are they! Praying all goes well with the birthing process! Can't wait to see the little pups!

Wow...she looks pretty big. I hope & pray her puppies are small. Her face reminds me of my Toby...so sweet.

I'm so glad she found you (or you found her) She's lucky to have you.

The same thing happened to us...we found a Black Lab, wandering in the middle of the country, clearly on her own. Brought her home. Nursed her back to health. Watched as she started putting on weight. Watched as her belly really put on weight. And realizing she would have puppies. Waited and wondered what we would see....
And much to our surprise.
13 Lab puppies!!
Yellow, black, and one chocolate.
Never could find her owner.
And now she has been a part of the family for years. And sadly, someone really missed out, because she is the best dog ever...