Almost 18 years ago I purchased a brand new, red Isuzu Amigo.  What a great, fun and sporty little SUV!  (The first time Country Boy saw my car he thought I must be adventurous with a car like that!  He was right!)  It was a workhorse too.  I've toted and hauled more stuff in it than most people would load in their trucks... wood, plumbing, plants, pallet full of tiles, feed, etc.  I loved that car, but alas, it was showing some wear and tear and beginning to have a few issues.
Country Boy decided it was time to get me another vehicle.  We stopped at a local used car dealer and ended up with sticker shock when we asked about the prices of some of the vehicles.  Crazy! So we shopped around and realized that the prices of used cars were much higher than we anticipated.  Guess it's been a while since either of us has been car shopping.
We ended up going back to the dealer in town and buying the first car we looked at.  Go figure!  But, at least after checking around we knew we got a decent deal.
What did we get?  A 2006 Jeep Liberty with only 63,000 miles! 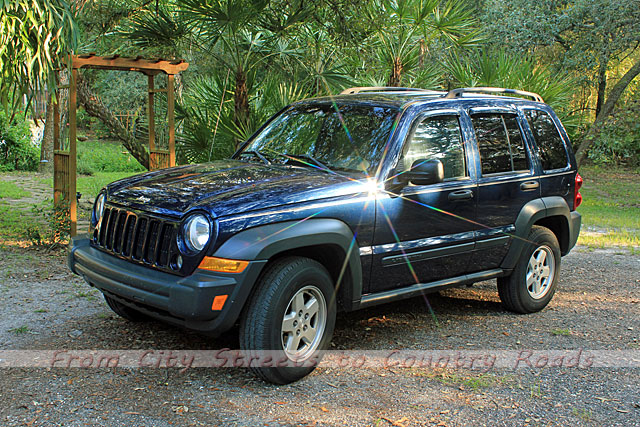 It's in excellent condition and runs really good.  I love it!  (I'm also checking out my 8-star filter in this shot.)
Since I want this car to last a really long time, I asked Country Boy if we could go ahead and have a carport put in.  We've been tossing the idea around but never decided on a location for it and there was no urgency for it in the past since the Amigo's paint job was pretty rough already.
We decided on a location that would not be very noticeable.  My old flower garden.  I tried having a shade garden in there but it was just too shady and even the shade plants that I purchased did not do well.  I eventually gave up on it.
Some prep work needed to be done to get it ready for the carport; plants relocated, a tree cut down and the area leveled out.
With the plants that needed to be relocated I decided to make a new flower bed and move them into this area.  The plants will get partial shade and will hopefully do better. 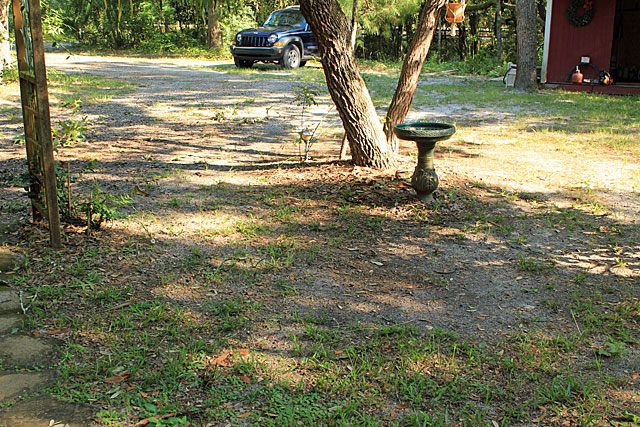 You can see the tree we had to cut down to make room for the carport.  Neither of us likes to cut any trees down but this one ended up having a large section of the tree that was full of carpenter ants so we chose the right tree to cut down. 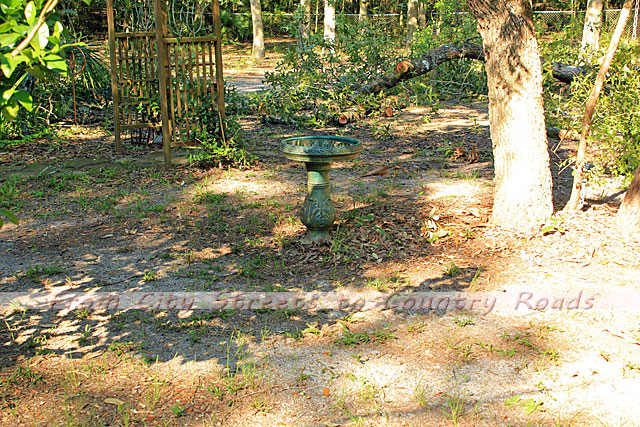 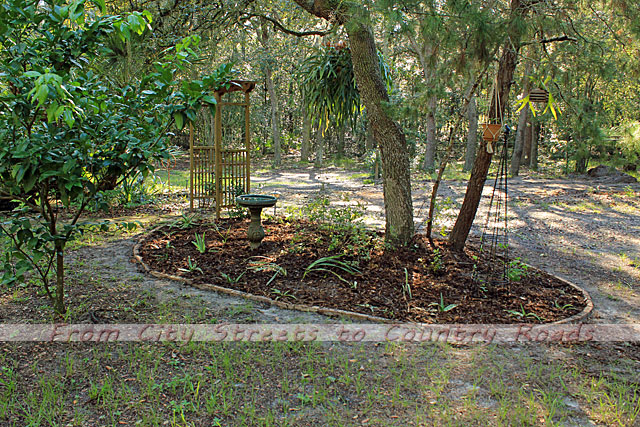 After much digging and planting I'm pleased with the new bed. 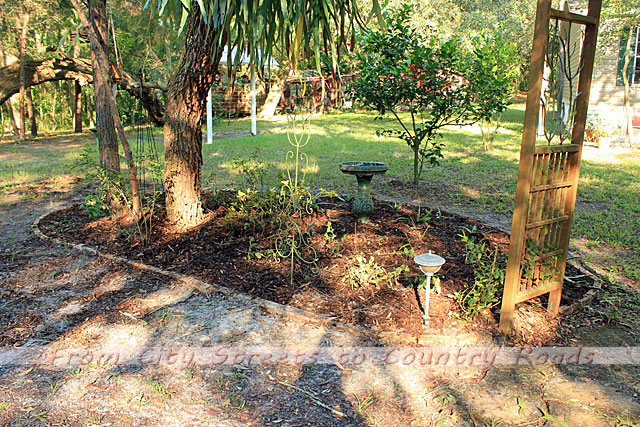 Once the tree and the plants were out of the way it was time to start leveling the ground.  Our neighbor brought his tractor over and let Country Boy operate it. 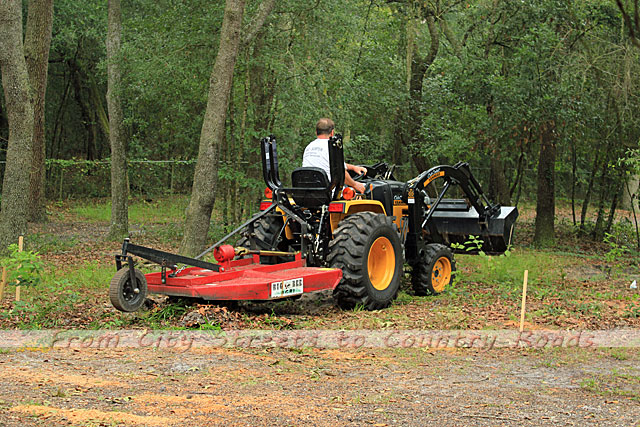 Country Boy was having a blast even though it was raining. 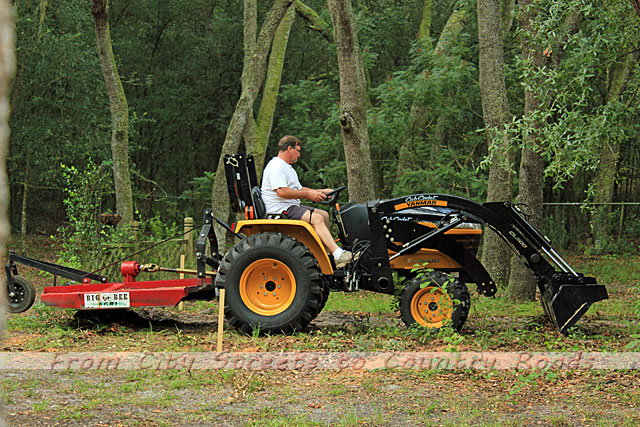 Needless to say, he wants one of these some day!  Boys and their toys, hahaha!
For the first time on the tractor I think he did a pretty good job...  all leveled, ready and waiting for the shell rock to be delivered. 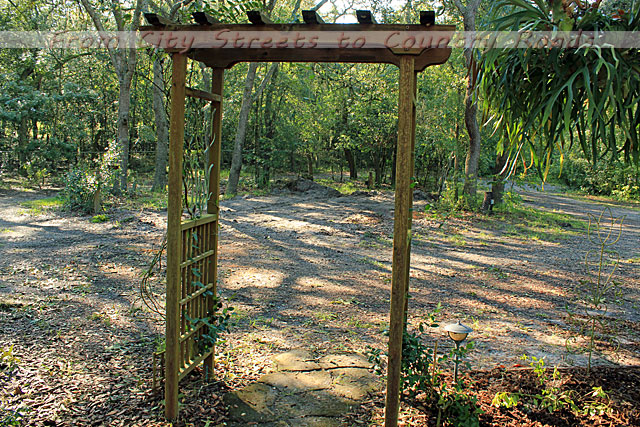 The next day 10 yards of local shell rock was delivered. 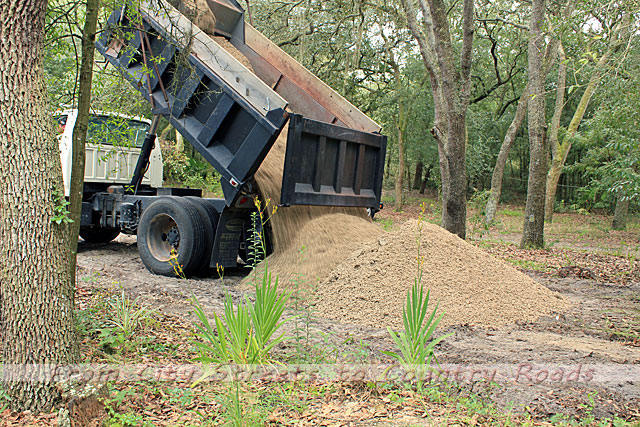 Funny story (after the fact) about the delivery of the rock.  The driver took the tailgate and slammed it against the back of the truck several times trying to get the last bits of shell and dirt out.  It startled us even though we were watching him but apparently it sounded like explosions to the neighbors.  They tried to call us but since we were outside we weren't able to answer the phone.  When we didn't answer, they got concerned, called 911 then came to check on us.  I was appreciative for their concern.  Even though we can't see our neighbors, we're all there for each other if necessary.  It's nice.
Anyhoo, Country Boy got back on the tractor and spread the shell rock. 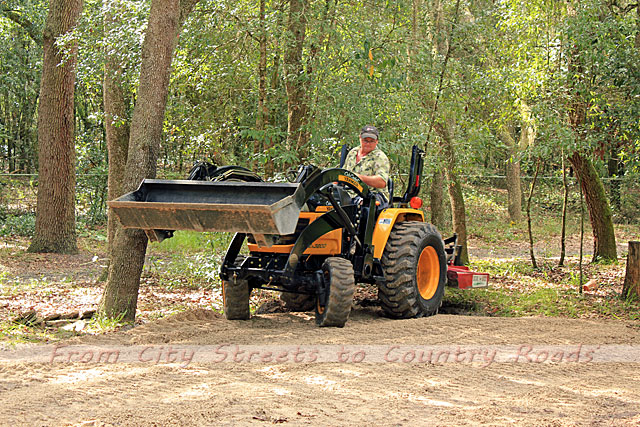 Once we ordered the carport it was supposed to take four to six weeks before it's arrival.  We thought we had plenty of time to get the area prepped.  It ended up being two days.  We were glad we were ready!
The following morning the crew arrived to install the carport. 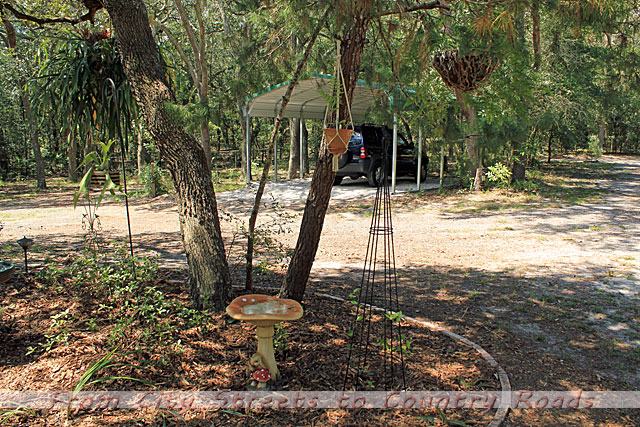 I like how it blends in with the surroundings. 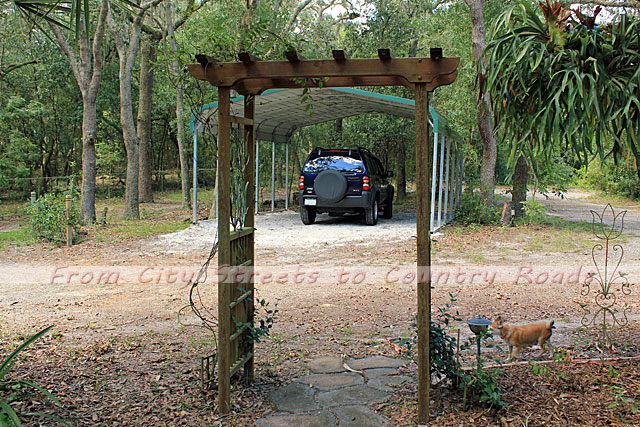 Those carports hold up really well, I have 2 for sheep and goat shelters, added another one 2 years ago for vehicles. Congrats on a "new" vehicle. There is still plenty of good years in used cars if you keep them maintained. Cars now days are more than I paid for my first 2 houses combined, and one of them was on 5 acres. I realize they have all kinds of bells and whistles but I just want mine to get me from point A to point B and back .... (but with working A/C in this valley's summer heat).

Nice vehicle! And nice shelter for it. Great idea to do that.

Glad your car has protection from the elements now. Good job!