It's been busy here the last couple of days with the arrival of my Dad, brother and the cargo trailer packed full with stuff.

Before they arrived, I had the kitchen looking halfway decent and had everything where it was easily accessible and where I wanted them, for the most part.  (Mind you, there wasn't a lot of utensils, pots & pans, or small kitchen appliances because the 5th wheel was originally set up for camping in which we mostly cooked over a fire or grill.) 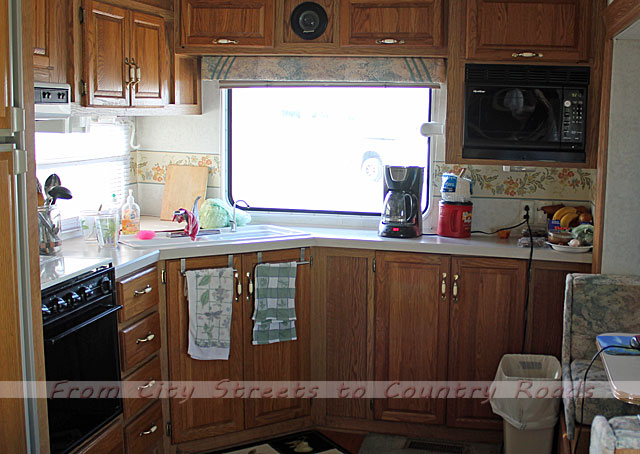 Look at all that counter space!  For those of you who are familiar with RV's, travel trailers or 5th wheels and who spend any amount of time in the kitchen, you know how important, and most times lacking, counter space is in these contraptions!

While CountryBoy was at work and the other boys were taking a very much needed nap, I began the task of pulling everything out of the trailer so that I could get a few things that I needed right away and so that I would be able to walk around in there.

I started to put the boxes labeled 'kitchen' inside the 5th wheel but then I realized that before I bring anymore boxes in that I, first, need to pull everything out of the cabinets, box up a few items that we don't use (I'll donate them to Goodwill) and then decide where to put everything.

I ran out of time that day so what I couldn't get put away was put back inside the trailer for another day.

I left the one kitchen box I'd already brought in and after a day of mostly not being home yesterday the place was looking like this... 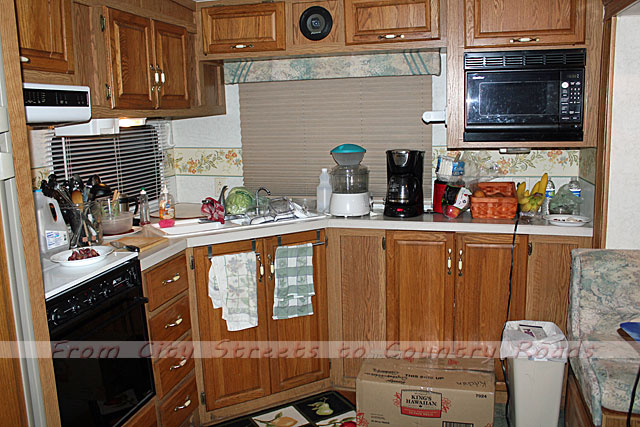 Ugh!  I can't take it anymore!

So, today is the day I will attempt to get the kitchen organized.

I'll let you know how that goes.

Meanwhile, CountryBoy and I were awoken last night with the sound of the most horrendous wind storm that we've ever been through.  And, that's saying a lot since we've both been through several hurricanes when living in Florida.

Unbelievable!  For over an hour the winds were howling outside keeping us from getting any sleep.

Thankfully, the wind was blowing front to back of the trailer so it was not rockin' n rollin'.  Either that or CountryBoy has this thing stabilized extremely well.

It eventually stopped so we were able to get a few more hours of sleep before the alarm sounded.

Anyhoo, on a few less hours sleep than normal, I am going to attempt to get this place in shape.

That is, after I move the cargo trailer up a few inches so that I can plug it in for the freezer and fridge.  It will also be nice to have some functioning lights in there!

Wind has been crazy here in KY, too. Scary!

That is probably the best kitchen layout I've seen in motorhomes. My parents' was an older one, so I guess they've come a long way since the late 80's.

Love your kitchen, do you have a nice view out your window? Wind in a RV is a scary thing, glad your okay.

Your bookshelf is being filled with books.

You've got a great space in which to work. I'm sure after you get it organized you'll be whipping up some healthy dishes for Country Boy. Hope you got it all done today. Enjoy your weekend!

What a spacey kitchen for an RV. Actually it looks as big as my kitchen. Sometimes it's hard to stay organized with such a small kitchen, unless you keep only the essentials. That's what I'm trying to do as I repaint my cabinets - just get down to what I really use and need.
Cindy