While I have no idea what kind of life Miss LizzieBelle had prior to last June (other than she was not taken care of and had lots of health issues) I do know that she has had quite a few changes since coming into our lives!

First, she had to overcome her poor health and being so run down.

She slept almost continually for the first month until her tape worms were gone and she had some nourishment in her.

Once the baby heart worms were killed off she began to feel better and started acting more like a dog wanting to play and wanting some attention.

Then, we realized she was pregnant.  Sigh.

She gave birth to six healthy puppies and was an excellent Mama.

She started becoming quite the farm dog having free run of the place and keeping her eyes and ears on high alert when something strange was going on outside (like a squirrel jumping on top of the bird feeder station) and making sure she let me know.

Then, a few months ago, we uprooted her from the farm and took her on a looooonnnnggg plane ride (in which she was excellent!) where she would begin living in a 5th wheel and becoming a desert dog. 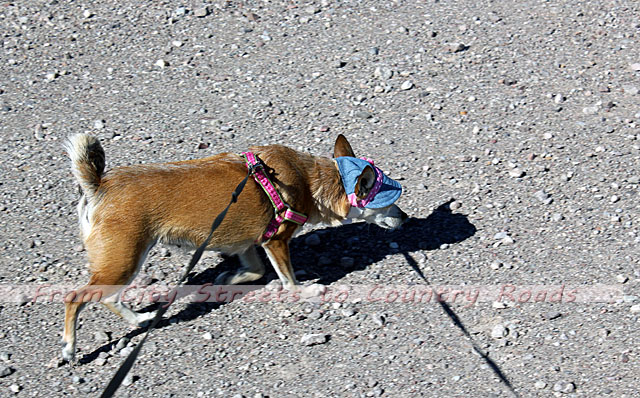 It's taking some time for her to get used to the fact that she can't have free reign of the desert.  I would love to let her run around to her hearts content but the desert is too big and there are too many coyotes and wolves, among other varmints, living out there as well.  It just isn't safe.

She loves to go for walks though.  She used to get so excited about going that she would run around the 5th wheel like a crazy dog making it difficult to get the harness and leash on her.  She's finally learning to be still making it much easier to put the harness on her.

We don't always get much walking done because there are simply WAY too many smells out there to be smelled!  And reclaimed. 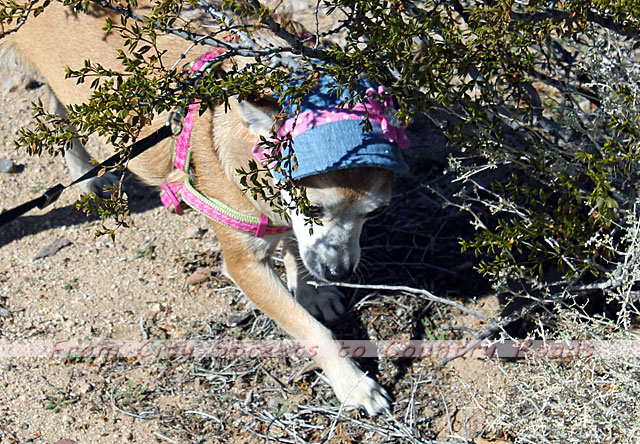 And then there are other times when I can hardly keep up with her.

She's adjusting well to life in the 5th wheel.  I do think she'd prefer that the cats were not around but, oh well, she can't have everything her way.  OK, most things, but not this one, ha!

I saw this on Facebook this morning and thought it was so cute and apropos!  The dog even somewhat looks like LizzieBelle.

Speaking of Facebook... are you on Facebook?  I caved a couple of years ago and finally joined the social media craze.  (I've drawn the line though... no Twitter, Instagram, Pinterest or any other time stealer for me since it already seems like I don't have enough time to do all the things I want to do.)  I have several friends and family members who live in other states, even other countries, and it is a great way to keep in touch with them and their families.

If you are on Facebook would you consider 'Liking' my From City Streets to Country Roads Facebook page?  I post things on there such as status updates, some photos and funny stuff (like the above picture), as well as a link to my latest post so that you don't miss any!  It's easy.  Simply click on the 'Like' button on my sidebar and that's that.  I sure would appreciate it!

We are all adjusting to our new lifestyle and are developing some routines.  (I like routines!) 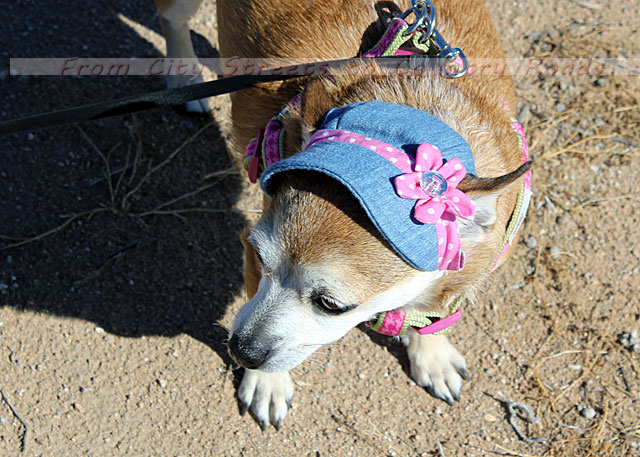 I think LizzieBelle likes routines also.  The one surprise she does like though is going for a ride in the car.

I went to town yesterday and took her with me.  When I asked her if she wanted "to go byes in the car?" she started dancing around and getting all excited!

While I don't know what LizzieBelle's life was like before she came to live with us I do know that her life now is full of love, attention and getting spoiled!

Email ThisBlogThis!Share to TwitterShare to FacebookShare to Pinterest
Labels: LizzieBelle

i know she probably misses her freedom - and i know you miss your chickens and ducks, etc. - but you are making new days. :)

I am glad you found each other she's a sweety and I love her hat so cute ! I don't do face book or any of those sites ! To many problems . I mean if the founder of face book can have is page hacked as of last year you would figure his page would be protected and secured , well there ya have it lol ! This is why , oh don't get me wrong blogger can have the same thing but it is seems rarer then these other sites ! Have a good day !

Lizzie is so joyful to be with you and have a good new life.

What a blessing that she found you!

What a sweet dog! I always say the rescued ones are the best. That cartoon of the dog "doing the math" is too cute.

I'm so glad she found you that day at church.

Morgan and I went crazy for her cute little flower hat!!!