Saturday CountryBoy and I headed west to California.  Oh, and LizzieBelle came too!

He wanted to show me the job site where he works and then check out the neighboring towns.

It was a cold, brisk morning as we headed out after sharing a pot of coffee and a yummy breakfast.

OK, so he drank most of the coffee but we shared nonetheless, hahaha!

It's just under an hours drive to the job site with gorgeous views along the way.  It's too bad it's dark most of his travel time. 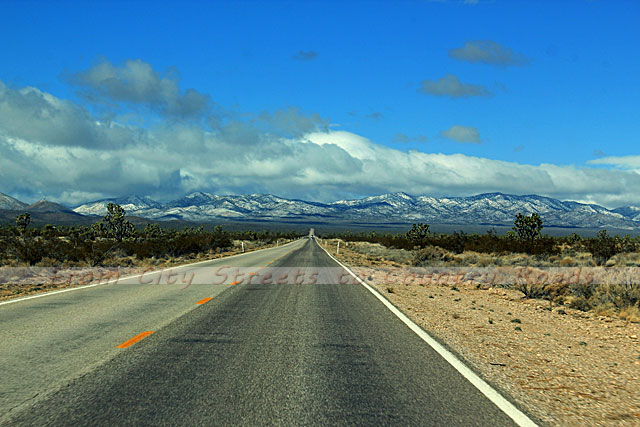 The job's on the other side of the mountains up ahead.

This road we're on is appropriately called Joshua Tree Road. 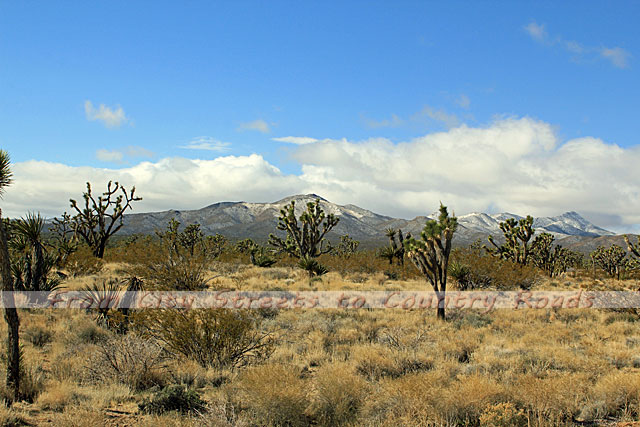 They don't look much like trees to me compared to the trees back home but there are quite a few of them around these parts.

You can read more about them HERE.

From this point, we had to turn back around because my camera battery was very low and I forgot to pack the spare battery in my camera back.  Sigh.  I was expecting to take a lot of photos and knew that the battery would not last.

We eventually made it to the job site. 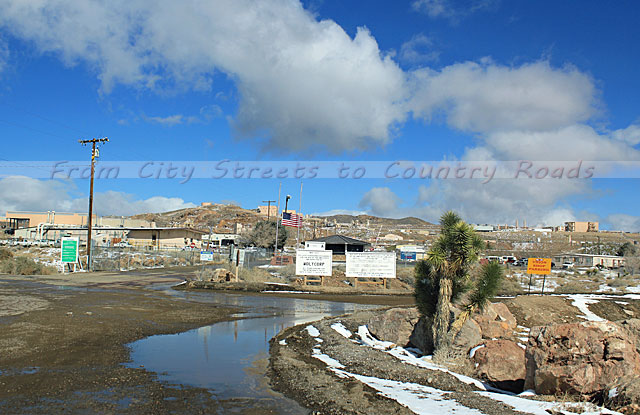 It's an old mine that is being restored and expanded.

The place is huge as you can see in the above photo.

CountryBoy is working as a Millwright installing and aligning large machinery.

He says that there is always a cloud over this mountain to the left of the job... 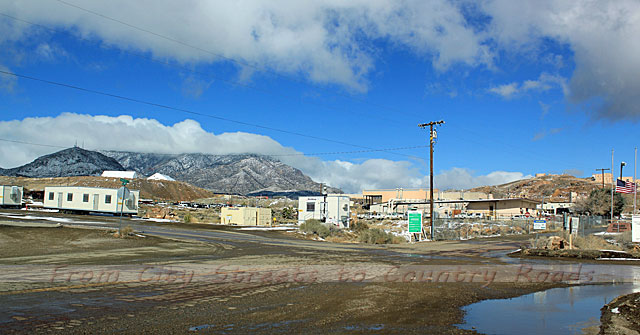 From there we went on to Baker, California where we ran into some very interesting specimens... 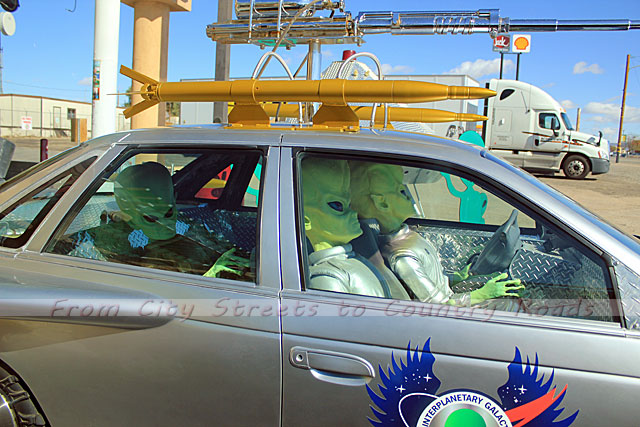 Yep, aliens.  Parked right next to us. 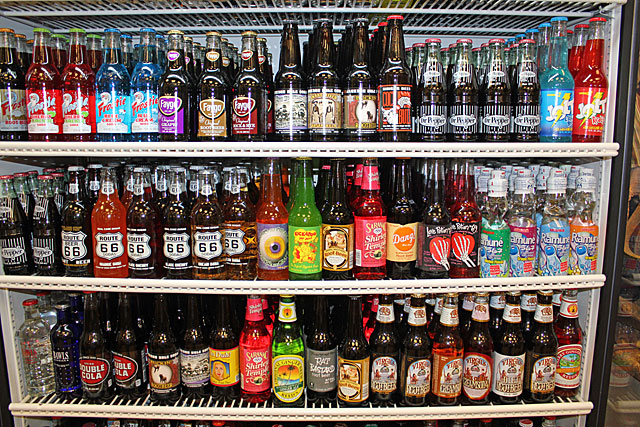 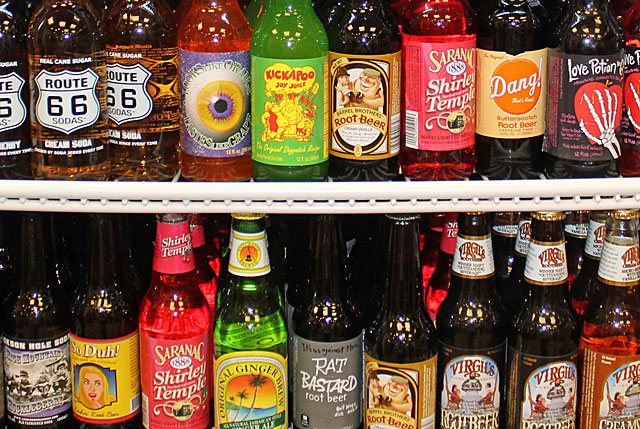 We stopped to eat at a Greek restaurant that's supposed to be really good but we didn't see anything on the menu that was suitable for our diet other than a $12 Greek salad.  Yikes!  I guess we'll never know how good it is.

After our alien encounter and deciding not to eat Greek we headed to Barstow, California.

It was a bigger town, city actually, but we didn't see anything that struck our fancy or any suitable photo ops.

It was time to head back home so we took a different route making a giant circle and hoping to see some different landscape.

We came across a section of Route 66.

Since we've been on Route 66 in Nevada and Arizona we thought it would be cool to be on a section of it in California.

So, we hopped off of I-40 and hopped on Route 66 that ran alongside of the highway for the most part.

It became so bumpy that we hopped back off it at the next ramp.

Here we are traveling alongside Route 66... 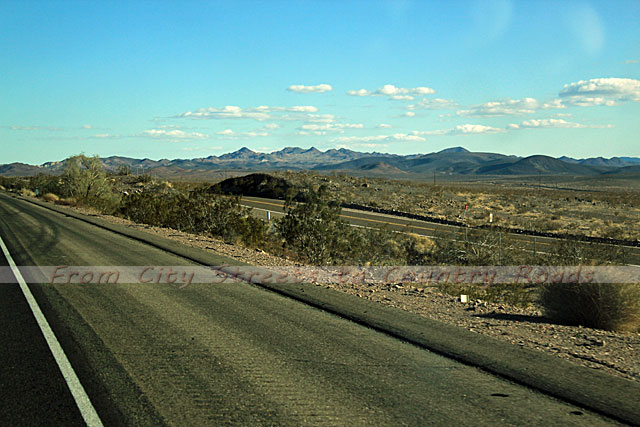 We were in need of some fuel so we got off the Interstate and bought a few gallons of ridiculously priced gas at $5.25/gallon at a gas station that was on Route 66.  It was the only place around. 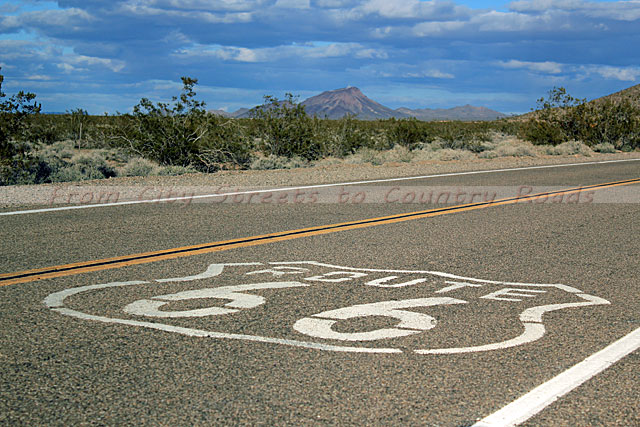 Since this section of Route 66 was smooth we stayed on it and discovered a nice short-cut to home.

It was an enjoyable day but I was expecting a lot more photo ops that just weren't there.

That's the trouble with expectations.  I think I would rather expect less and be pleasantly surprised rather than expect more and be disappointed.

Next time we head out, I'm not going to have any expectations that way I'll be pleasantly surprised!

And, by the way, since there were so few photo ops I didn't need the spare battery after all, ha!  Oh well, better to be safe than sorry.

well, what you shared was entertaining, nonetheless. :)

What a nice guy to turn around so you could get your spare battery. My Mountain Man would do the same. We're lucky girls.

Quite an interesting day! I could go for one of those road trips about now. The Joshua Trees are quite cool.. have always heard of them. I got a kick out of the names of root beer etc.. lol. Thanks for sharing your day! -Tammy

Thanks for taking us along it was fun ! I always find that when I don't take my camera there is a lot to photograph but when I do there is nothing always the way eh? Great photos ! Have a good day !

What an adventure! Lots of fun stuff to look at for sure. Glad you were able to go back and get a spare battery for your camera. That would have been awful if your battery died with no spare.

Wow, and I thought at $3.40 a gallon the gas here had gotten expensive!

Such fun pics. It's been so long since I've been out that way.

I hate when my camera battery runs low :-(

Wonderful captures, especially those of the highway are beautiful.

My first visit to your blog, I came here via Lisa's blog.