Out With The Old, In With The New

With a title like that, I'm guessing y'all are thinking I'm a little late for my New Year's resolutions.  After all, it is the first day of February so I'd only be a month late!

But, no folks, this post is not about resolutions.  (And, for those of you on Facebook, you already know what this post is going to be about!)

I'm talking about our toilet in the 5th wheel.  Yep!  I said it, our toilet.

This post is going to be about ME replacing our toilet while CountryBoy is at work. 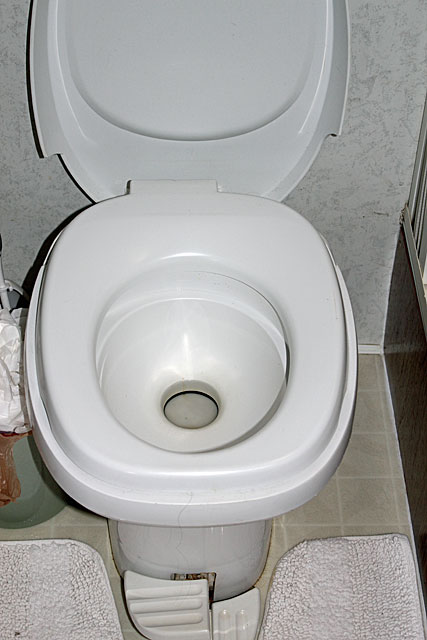 It all started several months ago when one of the foot pedals broke. 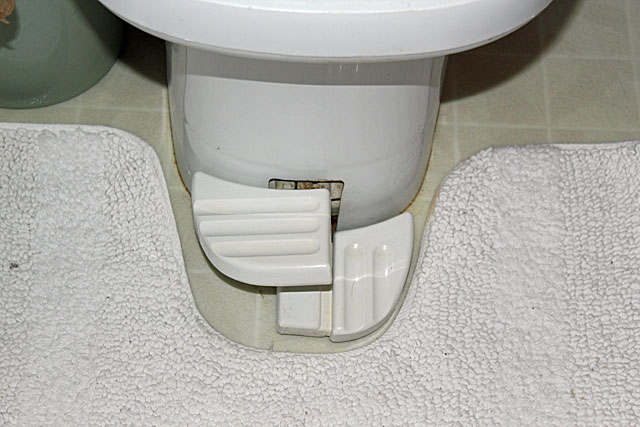 It was the one that added water to the bowl and not the one that flushes so we didn't worry about it too much.

CountryBoy has been wanting to get a new toilet but since we're in the middle of nowhere we kept putting it off.  (I was also trying to put it off because RV toilets are NOT cheap and I did not want to spend the money on replacing it until it was absolutely necessary.)

Well, it was quickly becoming necessary.

The other night, it was getting difficult to flush (meaning the pedal was difficult to push down) and when it finally gave way I noticed a crack in the plastic that the pedal is attached to and is up under the toilet.  It wouldn't be long and that crack would get bigger and the pedal would break off.

That would not be good since this is the only toilet in the 5th wheel and I really didn't want to bother the neighbors at 1:00 in the morning when I had to go potty, hahaha!

So, I called the nearest Camping World outside of Las Vegas, and they had the toilet we needed in stock.  The other 'road wives', who are also our friends and family, knew where the store was so we hopped in the car the other day and headed over there so that I could get a toilet.  Exciting, huh?!

Well, you'da thought I'd won the lottery when CountryBoy got home that evening and saw we had a new toilet sitting in the box!  (And, no, it doesn't take much to get us excited, ha!)

Every one was saying how easy it was to install so I decided I would surprise CountryBoy and install it while he was at work.

Yes, I know, that could be dangerous because if it did not go well, then he would come home to a surprise all right and no toilet, oops!

Well, it was a chance I was willing to take.  So, I read the instructions that came with the toilet and I also Googled it.  (What would we do without Google?!)

And then, I attempted to take the old toilet out (after I dumped the black water tank, pewy!).

After borrowing the right tool (because CountryBoy's are all at work, and of which I will remedy soon by collecting a few of my own tools) from a neighbor the old toilet came out rather easy.

After scrubbing the floor I was left with a hole in it. 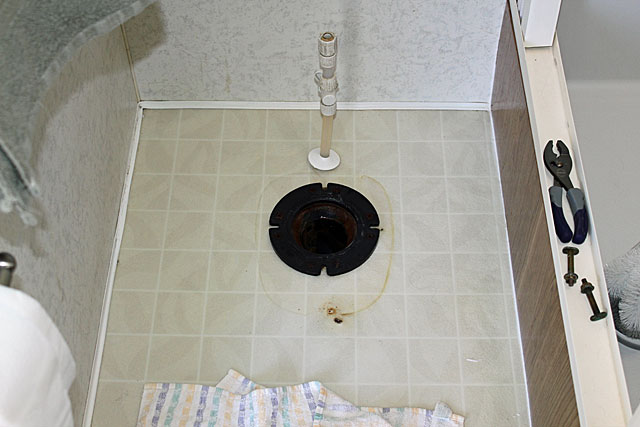 Note:  you can't buy just any toilet or a toilet that you really like to replace your old one.  You have to buy a direct replacement for the one that you had because the holes (the four slots in the black thingy on the floor) have to line up with your new one because there's no way you can replace the black thingy.  It's attached to all your piping that goes underneath the 5th wheel or RV.  The helpful lady on the phone told me which toilet I needed after I gave her the make and model of my old toilet.

I put in new bolts under the black thingy and placed the new toilet over it and tightened up the bolts.

I sat on it to make sure it didn't move and then I attached the water line to the toilet.

The new toilet is a couple of inches taller (yay, now I don't feel like I'm sitting on the floor when I'm on the toilet!) which I was all excited about until I went to hook up the water to it.

Yikes, the piping is too short now!  I panicked for a brief second and then I tried to see if there was any leeway in the piping underneath.  Thankfully there was and I was able to pull enough of it up so that it would attach to the new toilet.  Whew!  Remember, we're in the middle of nowhere and it would've taken me half the day to go get what I might've needed. 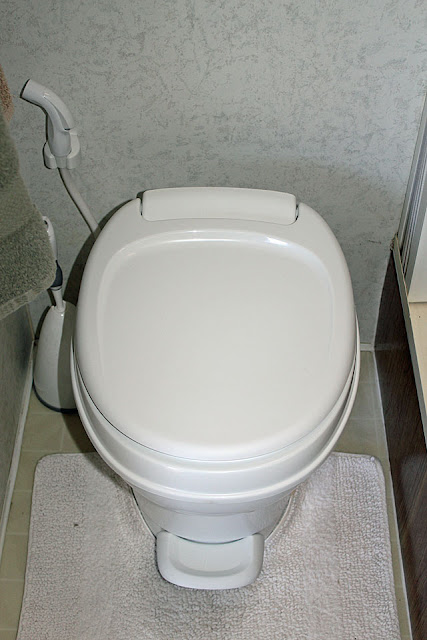 It even came with a spray nozzle that I attached to the wall.  (Now, if I could get one of those spray nozzles for my kitchen sink!)

There is only one foot pedal on this model which is better and should be sturdier.  Halfway down to fill the bowl with water and all the way down to flush.  (Do you like the instructions on how to use the foot pedal that are permanently printed on the lid, heehee?!) 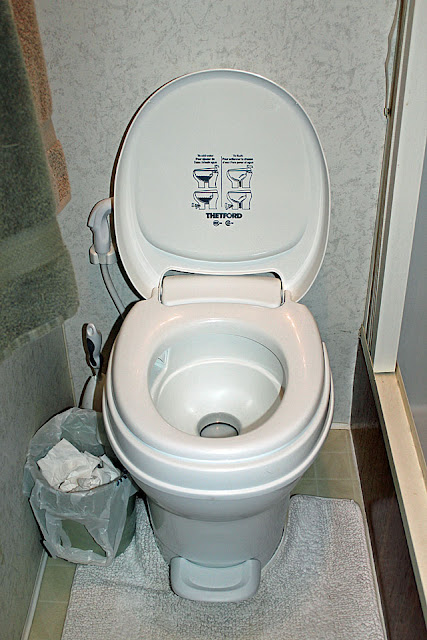 CountryBoy came home and was thrilled with the new toilet and the fact that I put it in!  He questioned me, at first, that I put it in all by myself but then again, he knows me!  I helped him build our two story barn at home... surely I can install a toilet in our 5th wheel, hahaha!

I am just amazed at the bravery you exhibit when it comes to home improvement. Glad it went well!

She is beautiful! You did a great job and are an inspiration.

You are a super hero!!! Nice job!
-Marissa

The romance of living in a fifth wheel just dulled a bit for me. That toilet does not look like something that would be very "homey" and comfortable. But kudos for you for making the change! I would have no doubt that you are entirely capable for doing pretty much anything you set out to do! :) XOXO

You rock! I once tried to change our faucet in our bathroom... notice the key word: :TRIED. I ended up breaking a pipe and water was flowing into our master bath... into our bedroom carpet covered floor... In my shock.. it took me more time than it should have to find the cut off valve. I ran out to the road side cut off in a wife beater and no bra... in a frantic state. Then later realized that the turn off valve was in our hall closet. Which I of course knew all along. You did a fantastic job and I know your dh was so proud of you!