When CountryBoy and I married some thirteen plus years ago, his folks gave us a very unique wedding present.  It was a trailing Philodendrum planted inside an antique, glass five gallon jug.

When placed in the right location, preferably where it gets a few hours of filtered sunlight, this plant becomes a no-maintenance plant.  Condensation builds up on the interior of the glass creating a warm, moist environment which the Philodendrum loves.

This jug/plant has moved with us from a small city to the country; has grown so much it trailed out of the jug and then was sampled and eaten by a few cats so that it no longer trailed; has grown out of the jug again; has been froze back to almost nothing and yet it still survived.

That is until the trip out west.

It met its demise due to too many cold and freezing nights and being stuck in a dark trailer for weeks.  It was nothing but a pile of soggy, green goo by the time it arrived.

We were so disappointed.  After all, it was a wedding present.

We left it be for a while hoping that maybe a piece survived somehow but nothing ever happened.

I decided it was time to try and recreate the gift.

The jug was nasty; dirty, moldy with dirt and mud packed in the bottom. 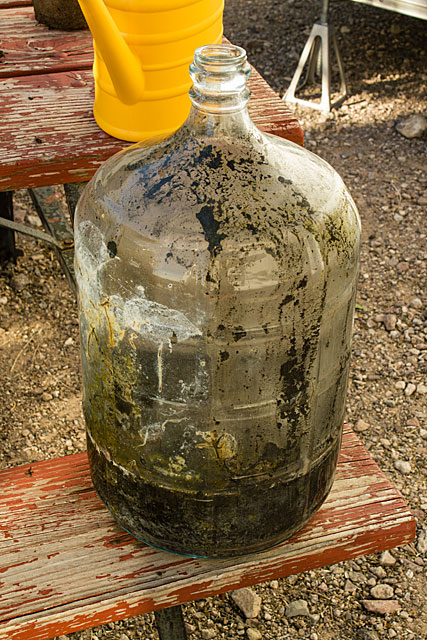 I dreaded trying to get it clean.

I bought a bottle brush cleaner in the garden shop of our superstore with a long handle.  It had a brush on one end and a sponge on the other end.  Even then it didn't quite reach the bottom of the jug.

After adding some water and swishing it around a bit I dumped the jug over expecting the dirt/mud to just pour out.

It was so compacted in there that it wasn't coming out.

I walked over to the edge of the desert and found a tree branch that had been cut off a tree.  I broke the limbs off and began poking the stick into the jug to loosen up the dirt.

After adding more water, swishing it around, poking and prodding the dirt, tipping the jug over and repeating several more times I finally managed to get the majority of the dirt/mud out of the jug.

Whew!  That glass jug is heavy.

Then I scrubbed the inside of the jug the best I could bending the brush this way and that trying to reach and scrub the moldy parts. 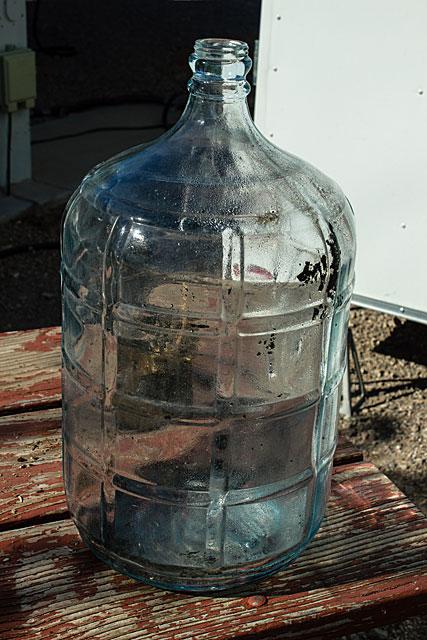 When I was satisfied with the results (or pooped out is more like it!) I let the inside of the jug dry a bit before  adding fresh, new dirt.  It's so hot and dry here that I didn't have to wait long.

I made a 'funnel' by cutting the corner off an envelope and I slowly added dirt until it reached the first ring at the bottom of the jug.

Next I carefully broke apart the potted Philodendrum I had purchased at the superstore. 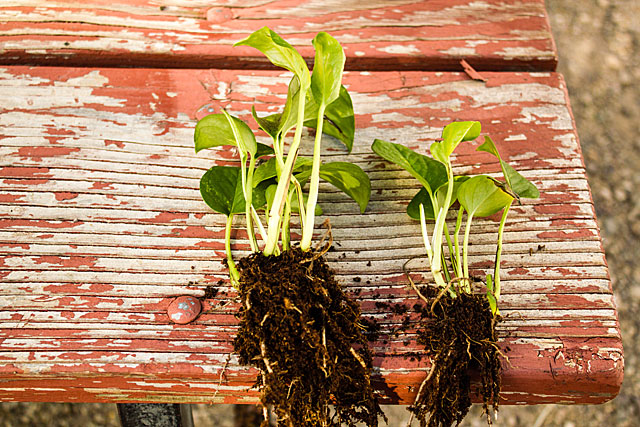 Now I had to figure out how to 'plant' them inside the jug with such a tiny opening.

Once again, I walked to the edge of the desert and found what looked like a miniature cane.  It was very dry so I had to be careful when using it but it was perfect. 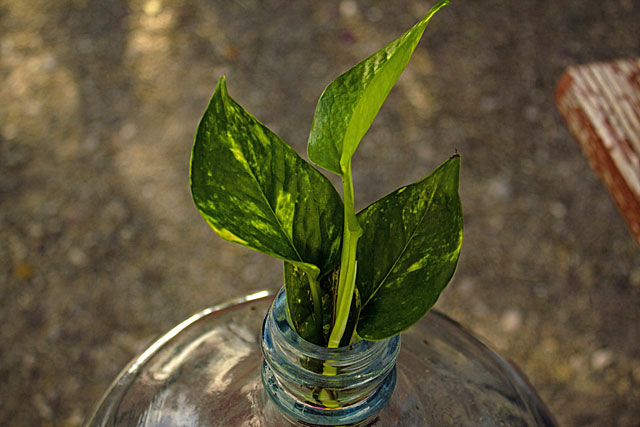 The first several plants were fairly easy to get the roots poked in to the soil with my mini-cane but the more I added the more difficult it became to get the plant upright and the roots buried. The tip of my dry mini-cane also broke off in the jug so I ended up adding a bit more dirt in hopes to cover up some of the exposed roots. 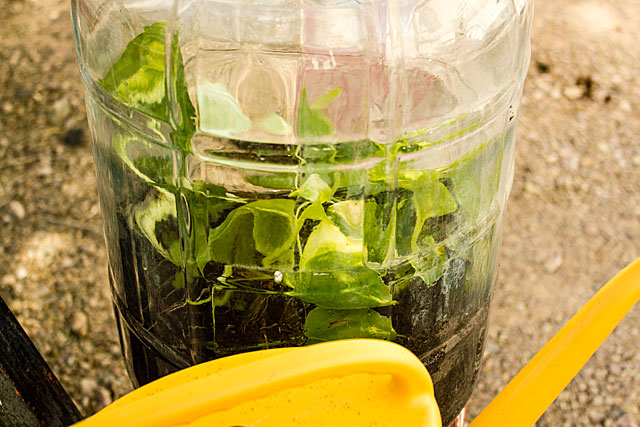 I poured some water in the jug to get the soil moist and that should be the last time I have to water it as long as I can find the right location to place the jug. 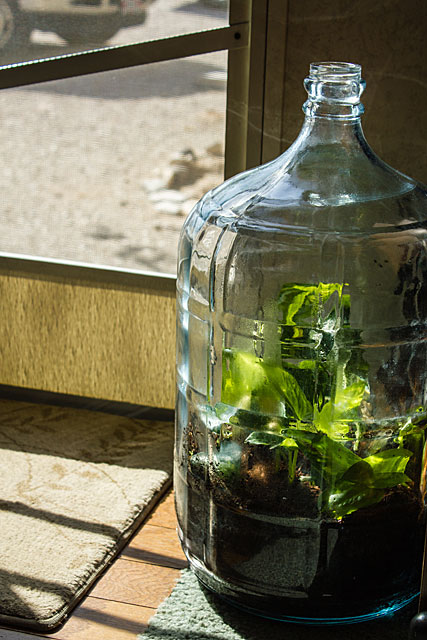 It's been over a week since I recreated our wedding gift and it seems to be doing fine.  Yay!

Email ThisBlogThis!Share to TwitterShare to FacebookShare to Pinterest
Labels: Philodendrum, plant in jug

WOW ! I am worn out now FEW ! Looks great though I hope it does well for you ! Thanks for sharing . Have a good day !

What a unique gift. Love the glass jug! Will be interesting to see how quickly it grows back - hope you take yearly shots on your anniversary(?) to show how it's doing!

So glad you were able to recreate such a special gift. I hope it flourishes for many years to come. Great work!

That looks great! That might be a project that even I can't kill. Although I think my two terrors (kitties) would probably eat the thing if it started poking out and trailing. Do you think it might survive in the front or the back outside?

That is really pretty! I am just out blog hopping....hope you can stop by and say hi! :)

It's perfect!! Great job on the re-creation.. it's gorgeous!

We saw the potential in her. Her lines are a thing of beauty. Thank you for visiting my blog.

Years ago I made home brewed beer in glass jugs just like yours.

It's a pretty jug, I hope the plant flourishes:@)

All that hard work and ingenuity was well worth it as it's a beautiful glass jar. Hope the plant does really well and gives enjoyment for years to come!

Good luck with Phil....I hope he grows and grows!! Sad to lose the wedding plant....but the new one looks great!