One Down, Five To Go

One of my goals I set for the New Year is to finish up the many projects I have going on or have already planned before starting anything new.
I have always been the type person who has many projects going at any one time. Since my hobbies are quite varied the many different projects allowed me to work on whatever I felt like doing at that moment.
Well, since living in the fifth wheel I have had to come to grips with limited space... Limited storage space. Limited work space. Limited living space.
So, due to my spatial limitations I decided it was time to limit my projects to a maximum of no more than two at a time. Which means I need to get crackin'!
Here's what all was in the works at the turn of the year...
- a wall hanging that needs hand quilted and binding attached
- a quilt throw that needs binding attached
- a crocheted baby blanket half finished
- an apron that was cut out but needed sewn
- a raggedy denim quilt, jean seams are ripped and ready to be cut and assembled
- a crochet basket, yarn purchased
Six projects at some stage in the works in this tiny space.  That's four too many according to my new goal.
That being said, yesterday and today I knuckled down and decided to tackle the apron.
The easy part of cutting the fabric was already done but since I don't know how to read sewing patterns I had put off finishing it up.
I must've spent an hour (or more) just trying to make sense of number 1 on the directions, ha! No really, I kid you not. And at one point I heard myself asking why the directions weren't written in plain English!
So after a long while of reading, re-reading, looking at the image, reading it again, etc. I came up with an interpretation and gave it a go.
My interpretation seemed to have been OK and I have to say, the rest of the directions were a tad easier to follow and the pace picked up from then on.
I did make a change as I was unable to get the 'casings' on the sides of the bib to turn out right. I also decided that I didn't think I was going to like the way they had the neck strap and tie as all one piece (which was to be fed through the casing that I couldn't get right). So I made them all separate and then attached accordingly.
Here's the finished apron... 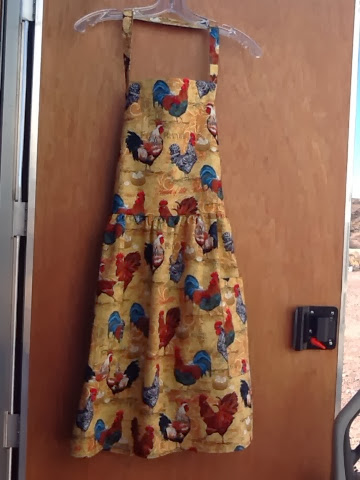 It's got two pockets on the front and ties in the back.
I love the fabric!  Chickens, woot!
I'm quite pleased with how it turned out especially for figuring it out as I go. (Note to self, I really should take Sewing 101...)
Anyhow, that's one down five to go. Or at least three so I will be within my new goal!
Till next time my friends!
Posted by Gone Country at 6:15 PM

Yes, sewing and other projects can get out of hand when there are too many going. Love the apron! On to the next project.. Heigh Ho!

Ha! Sounds like some of the directions on projects that I have done. Your apron turned out so cute... now 5 more to go!

I need to write a list of projects to tackle as well.