Weekend before last one of the largest quilt shows, International Quilt Festival, was held in Houston.  Before taking a quilting class last year, I had never heard of such a thing much less imagined I would ever attend one.

Well, here we are, almost a year later from taking the class I became a 'festival newbie'! 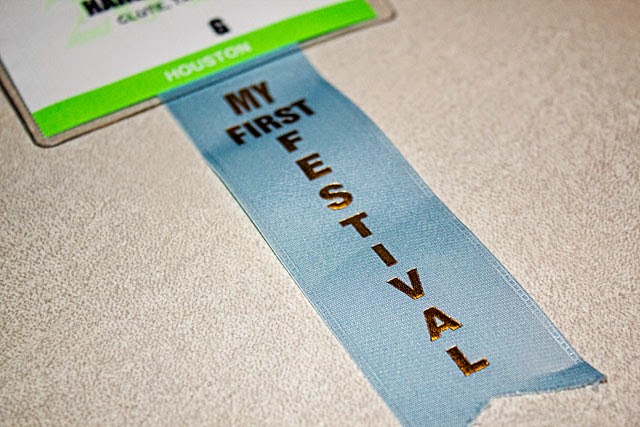 This all started when CountryBoy and I were getting ready to leave Arizona to head to Texas for the next job.  I had some things for sale at the local quilt shop and when I went to pick them up I mentioned where we were headed next.  The quilt shop owner then told me about this huge quilt show in Houston.

Long story short, I mentioned the show to a friend of mine, who also recently started sewing and quilting, and the ball started rolling.  Needless to say, after months of planning and waiting the time had finally come for both of us to attend the largest quilt show in the United States.  And yes, we had to choose THE largest as our first, ha!  Leave it to us!

To say that it was overwhelming is a complete understatement.  Thankfully, my dear friend is quite savvy when it comes to travel planning so I left that up to her.  Rooms for this convention book a year in advance but she found us a great place to stay near the convention center at the Hyatt Regency. 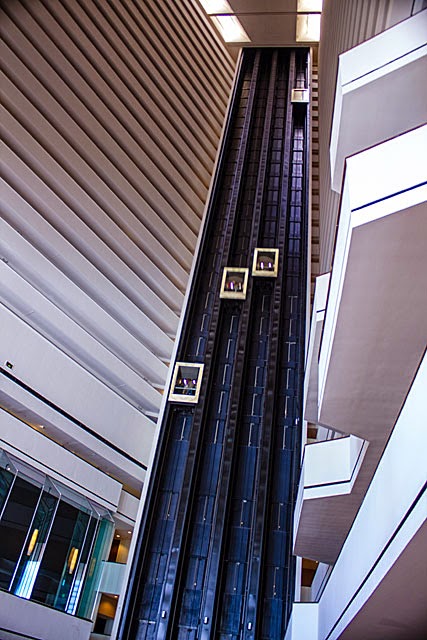 The hotel was huge.  We were on the 25th floor with a view of part of Houston's cityscape.


I have to take this opportunity to say that the staff was amazing!  They were very helpful with lots of suggestions for getting around town and to and from the convention center.

But, months before we even got to the hotel there was an overwhelming amount of show information to read through and decipher.  Things like schedules, classes being offered, vendor lists, demonstrations, and on and on.  I have to admit that I started to block it all out.  It was information overload!

This is the only festival that uses the entire convention center, all three floors - it is THAT huge!

Over time, my friend and I started working our way through all the info and decided that our best course of action would be to take a few classes, hit the vendor floor and just get a 'feel' for the quilt show this first year.

We each chose classes we were interested in taking and luckily, we chose a lot of the same ones so it was fairly easy to decide which ones to take.

The first class was Denimania, where the instructor showed us examples of things that could be made out of denim as well as giving us several patterns to take home. 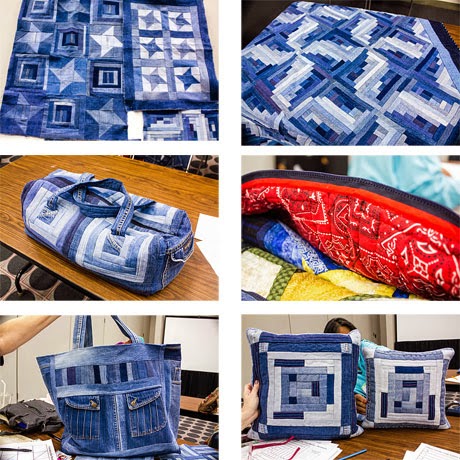 Quilts, wall hangings, duffle bags, tote bags, pillows, stuffed animals, just to name a few things.  I like working with denim; it is sturdy material with lots of color variations.  My friend and I walked away very inspired by all the possibilities an old pair of jeans could make!

We took a class in free motion quilting that was hands-on.  We learned and practiced several stitches which helped us get over our fear of free motion quilting.  (This class was from 6:00 - 9:00 p.m. and I was worried that I would have a hard time staying awake since 9:00 is past by bedtime, ha!  Fortunately, the class was very interesting and kept me awake, smile!)  I still have to work on my motions and body movement but I have the general idea.

Another day, we took a Sampler class where you were free to walk around and check out the many varied demonstrations going on.  We checked out organization ideas, lace ideas, hand quilting techniques, just to name a few.  And then we ended our classes with a demonstration on how to machine quilt large quilts in pieces that can be done on a regular sewing machine and at home.  I'll have to try that one some day.

There were LOTS of quilts on display but we only had time to check out a few of them.  I tell ya, many of these quilts are works of art... 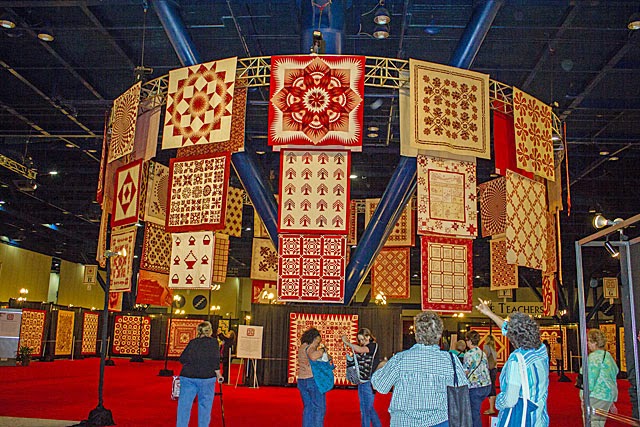 They were celebrating their 40th year so the theme was Ruby Jubilee.

This quilt inspired this year's quilt pin and tote design...

In between our classes, we hit the vendor floor.  An unbelievable amount of vendors! 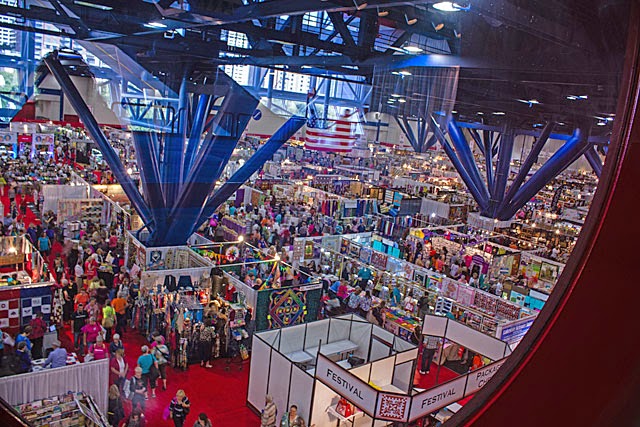 And this isn't even all of them!

We did manage to visit every vendor that caught our attention and interest over the course of the four days we were there.

And, I have to say, that there was only one day where the crowds were almost unbearable and too thick to see or check anything out.  Fortunately, we were in classes most of that day.  The rest of the days weren't too bad and we were able to move around freely (which we were both thankful for!).

We found LOTS of cool things but I think we both did very well at not buying everything that we thought was cool and holding out for those things that we couldn't get where we lived or something that we just really loved.  Most times, we would think on the item overnight so that we weren't making spur-of-the-moment purchases then regretting it when we saw something better or something else we would've rather had.

Here's a few of the goodies I bought...

A permanent dye kit to dye lace, some lace embellishments, and some grapevine lace. 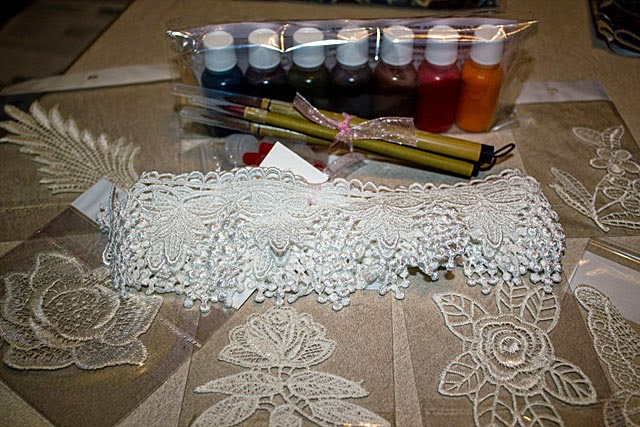 This will be so pretty when dyed!

I also purchased a yard of flowered lace but sadly, it did not make it in my bag and I did not discover it until I got home.  I've emailed the vendor but haven't heard back.  I'm expecting that to be a loss of $8.  sniff.  It was so pretty too. 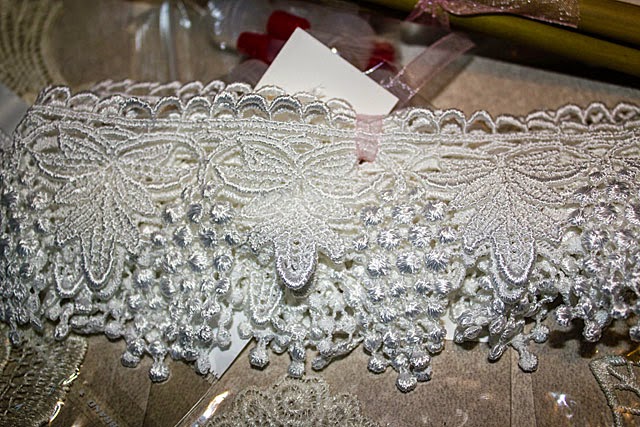 For some time now, I've been looking for a pattern that uses Jelly Rolls (made by Moda) which are strips of pre-cut fabric. I saw this pattern, Strips Ahoy, and instantly liked it.  This particular one is even signed by the pattern maker who happened to be at the show although I did not get to meet her. 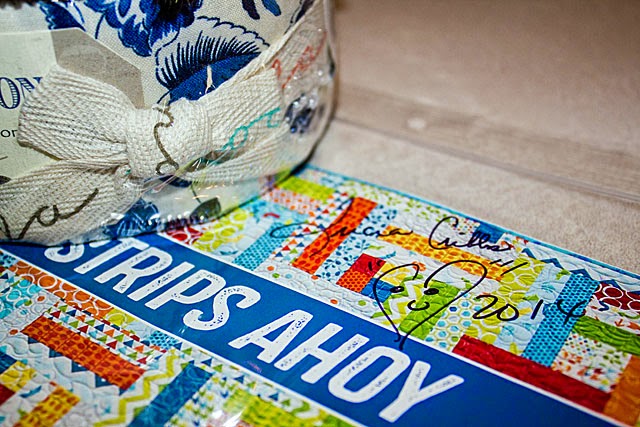 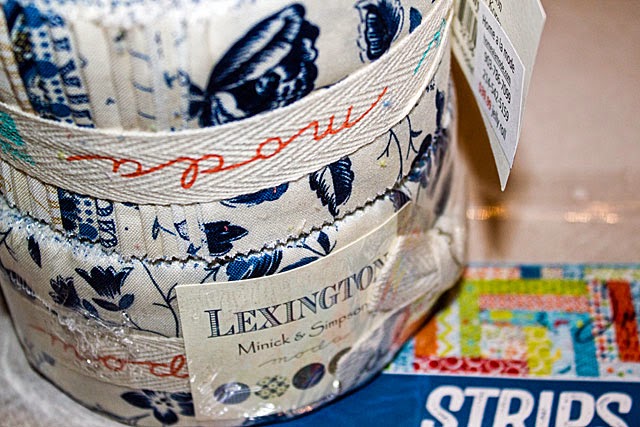 I glanced at the pattern and realized that I needed two Jelly Rolls and there was only one in that booth.  Now, I was on the lookout for another one just like it somewhere in the vastness of vendorland.

I told my friend to help me look for it and that the name was Lexington.  Wait, what?  Lexington?  Our new farm is an hour away from Lexington!  Cool, huh?!

Then later that evening as I was emptying my tote bag full of goodies I realized that the blue theme would go along perfect with the water pitcher and basin that I got from my Mom.  For having given no pre-thought to decorating the guestroom  I think it is amazingly coming together!

I bought this roll of fat quarters because they will pair nicely with denim and have that sort of vintage feeling. 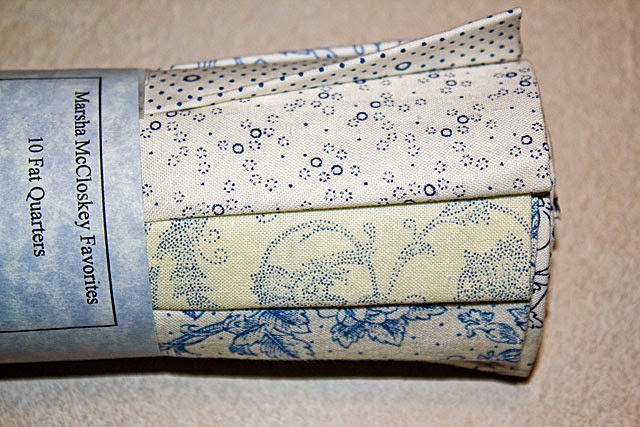 These fat quarters just caught my eye along with a couple of others that I will show you in a bit.  I have no idea what I will do with these yet but I know I'll come up with something, wink! 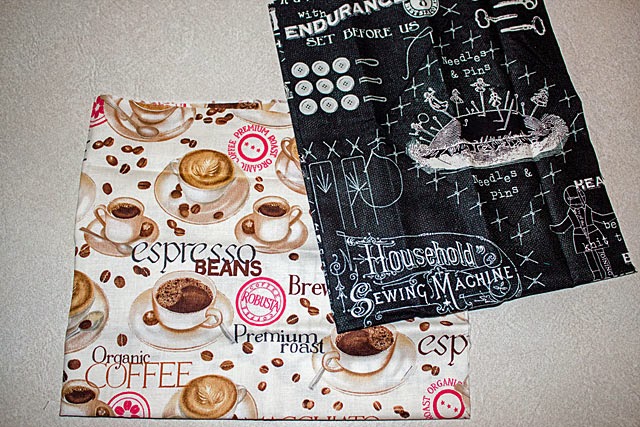 I love totes and purses.  These patterns caught my eye and I'm excited to give them a go.  The one on the right converts from a purse to a small backpack.  How cool is that?  Great for those times when you need to be hands-free!  Also, my friend has made several of this pattern makers purses and she says her instructions are awesome.  We'll see, haha! 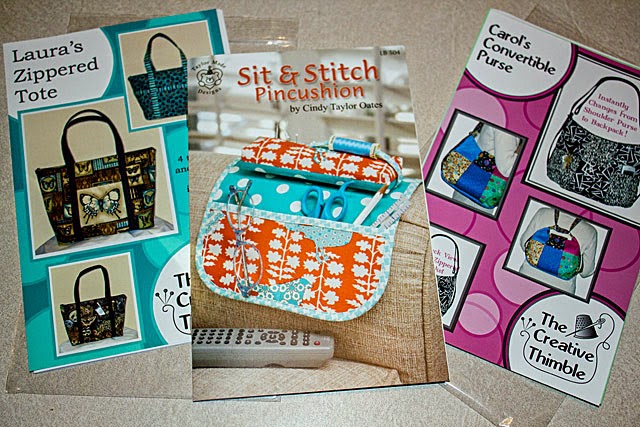 After the quilt show was over, I was fortunate to have my friend stay with us a bit longer.  Luckily, after being together 24/7 for four days we were still talking!  And, feeling inspired after such an awesome weekend we couldn't wait to do some sewing.

We decided to use some of the fat quarters we bought to make the Sit and Stitch Pincushion pattern above.

Here's how mine turned out... 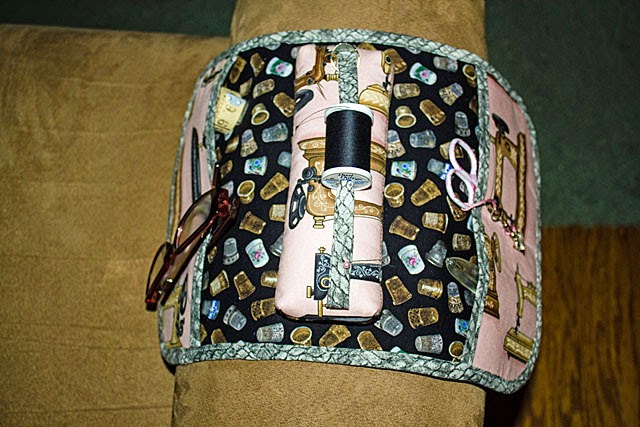 Is that not the cutest, most practical thing?! 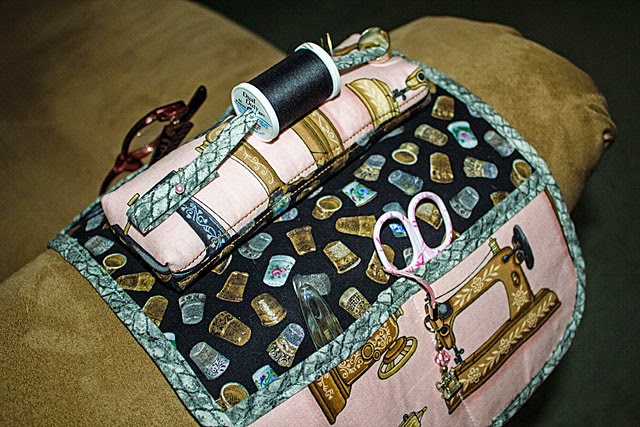 Now I won't have scissors, seam ripper, tape measure and a spool of thread cluttering up the tiny endtable/shelf  or needles sticking out of the couch.  ouch!  Everything has their place.

Isn't this cute?  I bought these scissor keepers at the quilt shop in Arizona.  I loved the pink bling and the old sewing machine.  One day I'd like to have an old Singer Featherweight in the sewing room at the new farm.  I think it would fit in perfectly at the farm and will be great for straight stitching. 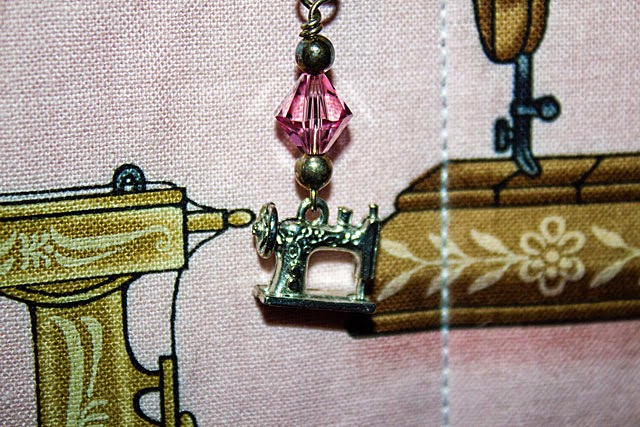 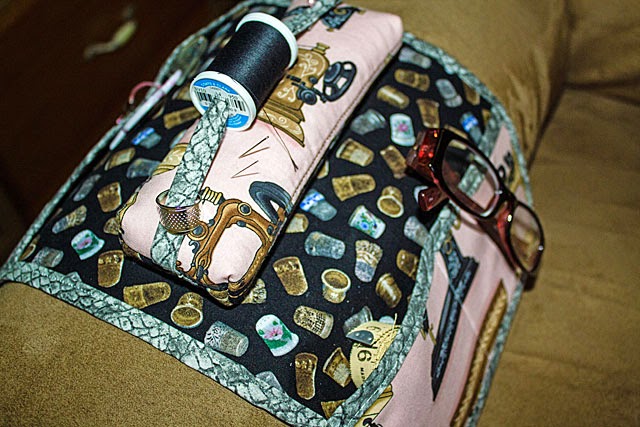 The pincushion is filled with crushed walnuts shells.  Who knew there was such a thing?!  As it turns out, it is used for reptile bedding.  We had to go to a pet store to find it.  But, it is said to help sharpen the needles so that's a plus. 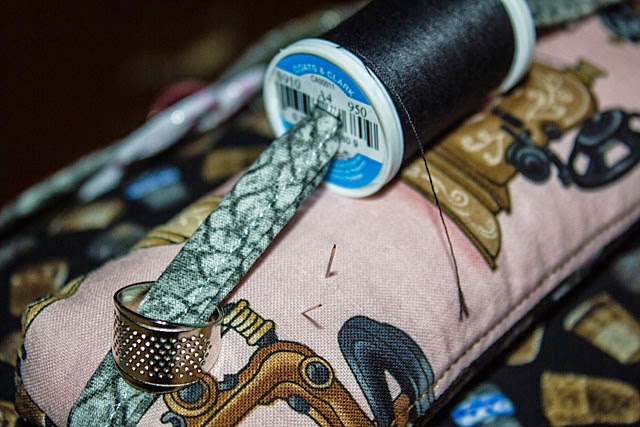 This was lots of fun to make and hopefully I will be making more in the future.  Gotta use up the rest of the 5 lb. bag of crushed walnut shells, haha!

And, last but not least, was my very last purchase... 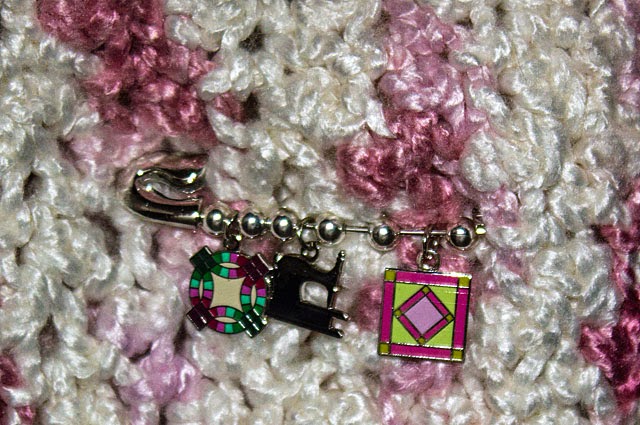 Overall, the quilt show was totally aamazing for these two festival newbies!  The attendees were all very pleasant (with a few exceptions) and welcoming and as I mentioned before, the staff at the hotel was very helpful and accommodating.  Every night we were wore slap out from all the walking, gawking and inspiration but we wouldn't have had it any other way!

This may have been our first festival but it most definitely won't be our last.  Hopefully soon we'll be looking for festivals in and near Kentucky, smile!

Till next time friends,

Hey Suz, glad you had a great time. I see my allowance heading to Texas. The picture and bowl is perfect with that material.(I looked at it as it is on your hutch in my kitchen)lol. Looking forward to the road trips to Kentucky!

"From City Streets to Country Roads" has been included in our Sites To See #413. Be assured that we hope this helps to point many new visitors in your direction.

What an amazing experience this would have been - and overwhelming. So good you had a friend to go with and make it work out so well.