A Day of Rest

Evidently, it was a day of much needed rest!  Apparently, my rollercoaster of a day yesterday wore me slap out!  I went to bed early, had a good night's sleep yet still slept in this morning.  Precious came in and started 'telling' me it was time to get up.  Actually, I think the oudoor cats told her to come in and tell me that it was past time for their breakfast!  After all, it was almost 9:00 and their internal clocks knew it was late!
I was lucky to get this shot... she does not like to pose for the camera!  Her nickname is 'Mouth' so you can just imagine the racket she was making when she was 'telling' me to get up!
After church and a light lunch, I could still barely keep my eyes open.  So, I laid down on the couch to rest...  my rest turned out to be a pretty good nap!  Oh well, now I'm awake, sipping my evening decaf coffee and writing on my blog!  I have a feeling that I will still be able to sleep tonight even after all the sleep I got today!
~~~~~
Last weekend, Country Boy & I went to a local state park with some friends and had a fabulous time taking pictures and enjoying the beautiful day.  As we were leaving the park I had to stop in the gift shop just because it was a gift shop and that's what you're supposed to do!   I was quickly browsing through the shop with no intentions of buying anything until I saw this little bracelet.  The pink beads caught my eye and piqued my interest but then I read the card that was laying in the box under the bracelet...
Believe, Courage, Strength
Believe in yourself
Have courage and conviction
In all that you do
Add a little patience
And Strength will come to you
I can't put a finger on why that spoke to me but it did.  Maybe because I don't always believe in myself, or have the courage to try something new or the conviction to stand up for something.  It also reminds me of the verse in Phil. 4:13, I can do all things through Christ which strengtheneth me. 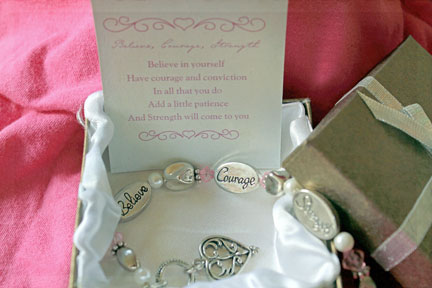 I wasn't going to get the bracelet but Country Boy saw how much I liked it and told me to get it.  (Besides, it was really cheap so that was a plus!)  Now I have a visual reminder to Believe, have Courage and Strength will come!
I hope everyone had a fantastic weekend as we're nearing the end of February already!
Till next time,
Gone Country
Posted by Gone Country at 9:46 PM

I would have absolutely bought this bracelet, too. As my hands age and my fingers get all wonky, it's uncomfortable to wear rings. Bracelets, on the other hand, are fun and I can stack them halfway to my elbow if I want to. The message on the silver beads on your bracelet is really uplifting ... I like stuff like this. (Thanks for visiting my blog ... I would have sent you a personal reply, if I had your email ... hint, hint.) :)