Country Boy and I had another day of running around and taking care of errands. We worked around the house this morning while it was cool then we headed to the ICCA (International Coin Collectors Association) event. We took several old coins, medallions and some jewelry that was never worn or broken.  It's very interesting!  You show them what you have, they check the item out and then research the value of it. If you're interested in selling your items they will offer you a price. Unfortunately, we didn't have anything that was rare and worth thousands but we did walk out of there with a check for $170! Not bad for stuff that was taking up space in a drawer! This seems to be the week for some decluttering! And it feels so good! Especially when you can walk away with a little something for your clutter!
On our way home we made a couple more stops... First stop, the Tractor Supply store. I've never been in one and Wow! is it a cool place! Lots of stuff for a gal who's Gone Country! When I saw this metal chicken medallion I knew exactly where I was going to put it! 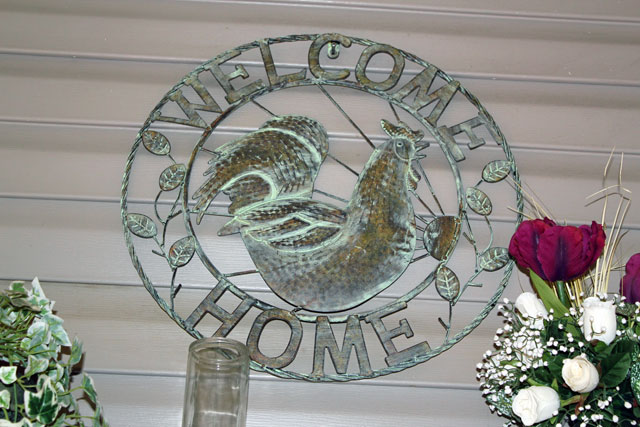 On my screened in front porch right at the center of the pitched roof above the shelf. 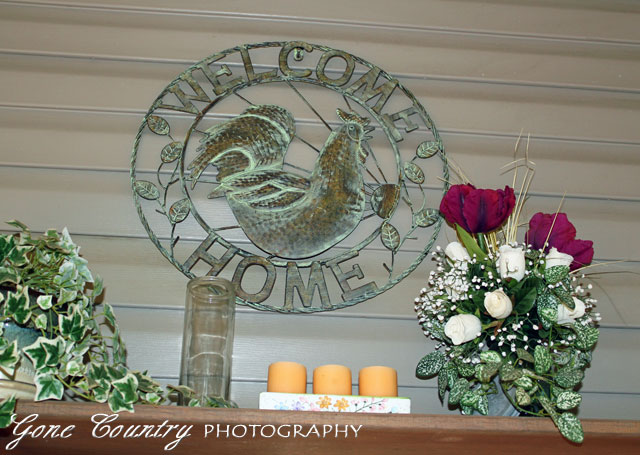 I thought the price was OK so, I just had to have it! Then when we got to the register, it was marked down $5.00!  Yay! I love it!
The second stop was the bank to deposit our check we just received!
The third stop was the health food store. I was determined to find some Coconut or English Toffee liquid Stevia. They had neither *sad face*. BUT, they did have Hazelnut! So, I picked up a bottle and we're trying it out in our coffee this evening! It's pretty good but I think the English Toffee would be better since that's one of my fave's! I found the English Toffee online for a reasonable price and will order that but I never saw the Coconut; will have to keep looking. They had grape, rootbeer, peppermint, chocolate raspberry, etc. that could be added to coffee, water, tea, yogurt or anything else you can think of! I saw a total of 13 different flavors online AND, it's all-natural with zero calories... gotta love that!
The fourth and final stop was the Army Surplus store. Country Boy was looking for a jacket that he could wear at work should the Lord open the door for him to get back into construction. (We're still praying for guidance and direction.) He used to have an old Army jacket and he says they kept him warm. He found an Army jacket that was too big but would have worked. Then he found an Air Force jacket that was his size and would do the trick. We were more than happy to get it since his cousin serves in the Air Force (thanks Cuz!).
Overall, it was another productive day. I like days like these when things are getting done! Git 'R Done!
Tomorrow is a play day!  We're going to my folks' and the guys are going to play golf and the girls will chat and shop!
I hope you're having a Wonderful Wednesday!
Till next time,

decluttering AND making some cash while doing it! gotta love that!

was that a Tractor Supply Store you went to? i love stopping in there. i always have to gravitate to the birdfeeder area... :)

I love Tractor Supply!! That's where I get most all my bird seed and birding supplies from. :)

I'm glad you were able to get some money from your coins!