Early yesterday evening, I was standing at the back door holding Hunter and he and I were looking out at the backyard and the back deck.  I was looking for Mama and Papa Carolina Wren who have been busy from sunrise to sunset feeding their three babies.  Mama and Papa decided that the perfect spot for a nest would be inside a tin can that is in our hanging (because of the wild varmints) recycle bins on the covered back deck. I'm not sure what Hunter was looking at while I was looking for the birds but I think we both spotted it at the same time. A snake... wrapped around the top of a tote that was left on the back porch after the yard sale. 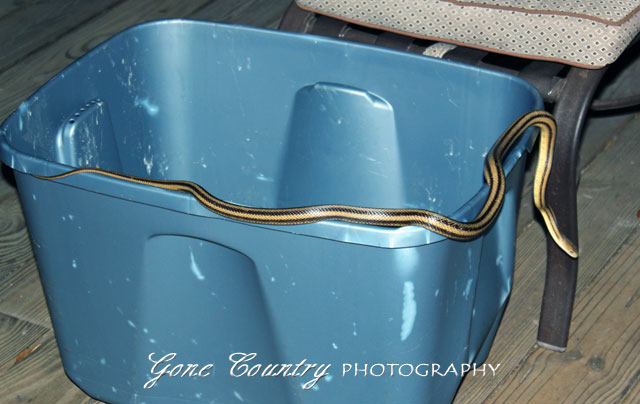 By the time I got Country Boy, the snake knew he'd been spotted so he was on the move.  (I bravely backed (WAY back!) him up as he moved the snake off the porch.)  Hunter wasn't sure what to think or where to go but as the snake fell/slid off the back porch Hunter jumped down to keep an eye on the snake.  I think he was fascinated with it at first.  Until, it moved!  It started heading underneath the back porch. 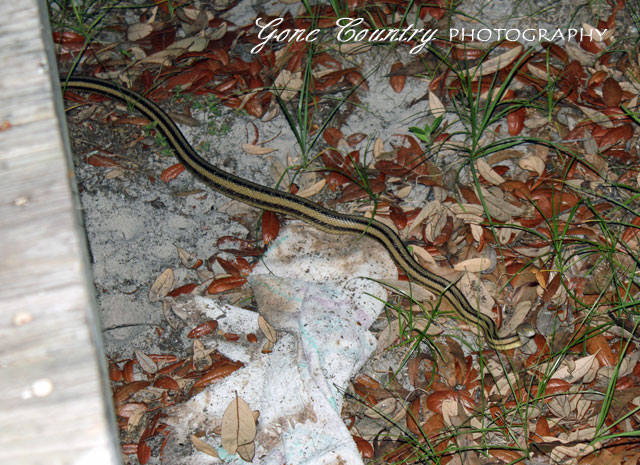 (Pardon the rag!)  That's when Hunter decided he didn't like that snake.  He started backing up and kept looking at us to see if we were going to do anything else to get this 'thing' off his property! We went back into the house and Hunter stayed outside to keep an eye on that 'thing'!
That's the first time that a snake has been that close to the house let alone on the back porch.  We think he was heading for the bird's nest and the babies.
An hour or so later, I went back to see if the snake was still around.  I knew it had to be somewhere on the porch because Hunter was about ten feet away from the back door staring at something.  I figured it was the snake.  Sure enough! It was on the side of the house between the back porch deck and the house. I think with all the 'commotion', the snake decided it wasn't worth it because it didn't stick around long after that.  I left the back porch light on and a couple of hours later Country Boy went outside with a spotlight and scoped out all around the back of the house and didn't see the snake.  Thankfully, the babies were still in the nest this morning!
Hunter, on the other hand, was jumpy and skittish all night!  He would look under any closed door or object and I mean seriously look as if he just KNEW that snake was in there.  I've never seen him act like that so it was quite amusing!  I was always worried that he might bring a 'snake present' in the house one day but I don't think I have to worry about that now!  I can handle the live mice, rabbits or bird presents!  Just not a live snake!
I hope you had a great Thursday!

Email ThisBlogThis!Share to TwitterShare to FacebookShare to Pinterest
Labels: snake

It's an old cliche, but it's true, I think they are more afraid of you than you of it...

I hope that ole' Eastern Ribbon snake don't come back for the bird babies. But if my memory serves me right, I think they are mostly interested in frogs and fish.

Poor Hunter, I don't blame him for being skiddish. Snakes have a way of creeping me out, no matter how harmless they are! ha!

it's a very pretty snake - and seems like a friendly one (non-poisonous?) but deadly for baby birds, obviously...