This afternoon I was walking back to the house from the barn and I noticed some action at the bird feeders.  I quickly went in the back door, grabbed my camera, went out the front door and was able to capture this Tufted Titmouse chilling on a limb... before it flew down to get a drink. 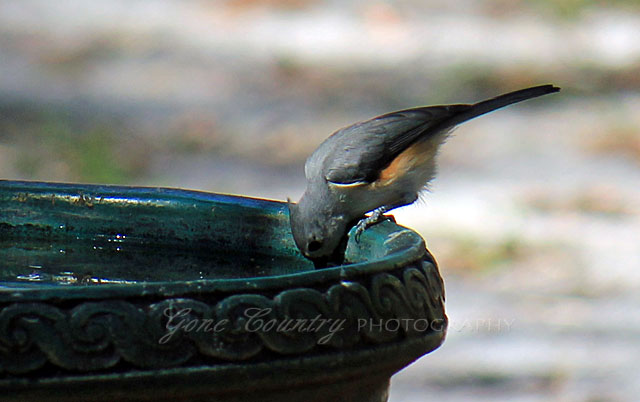 It always puts a smile on my face to see the birds eating from the feeders, getting drinks and taking baths from the bird bath not to mention listening to their pretty songs and chirping!  Lucky me!
~~~~~
On a completely different, not-so-lucky and not-so-smiley topic... I spent a good part of the day (again) trying to fix the local print spooler on my PC.  I don't know why it quit working (a while ago) and I've tried all the 'fixes' that I could find on several different forums, several different times and it'll work for a second and then it quits working again.  Has anyone else had this problem?  I'm using Windows 7 and a Canon Pixma wireless printer.  I've even updated my print drivers.  Ugh!  Apparently, this is a common problem with Microsoft from the number of people I saw asking the same question!  Sheesh, you'd think the computer geeks at Microsoft could fix it so it wouldn't quit in the first place!  I've got some things I need to print out and I'm getting tired of emailing them to Country Boy's computer and printing from there.  I am thankful, though, that I can at least do that.  I can't imagine the frustration of someone not having that capability.
Does anyone have any suggestions, in plain, non-techie English?  I can't believe I wanted to major in Computer Science at one time.  Ha!  What was I thinking!  I'm this close to taking it to a computer shop *sigh* but I really don't want to do that.  (I'm cheap and I don't want to be without my computer, heehee!) So, any suggestions would be greatly appreciated!
Till next time,

i use Windows 7 on my laptop and had an older photo printer that was not W7 compatible, but it worked with an alternative driver. that blew a few weeks ago, and no matter what, i could not get it reinstalled or working. i have to load everything on a thumb drive, boot up my ancient laptop and print from it. so even tho i have no suggestions,i feel your pain!

We have windows 7 as well but our printers arent wireless they are the new Epsons sorry cant help have no clue about wireless printers wish I could help ! Lovely bird photos ! Hope you get your printer problem sorted out ! Have a good day !

Love the pics! Sorry to hear of your computer problems, I always say they're great... when they work! Good luck:@)

Have you tried uninstalling the printer all together and starting all over as if it was a new printer? Once you plug it in for the first time go to their website and download the printer drivers from there. If it is a wireless printer it may very well be a permission issue in your anti-virus. My thoughts...I hope it helps but I would be uninstalling it and starting all over.
Tracy

Love your pics!!
Very interesting about the printer! I can't print from my laptop anymore and it has W7 on it - so I wonder if it is the same problem?