Let me introduce to you Miss LizzieBelle's little hooligans...

Her firstborn, Onyx (or Blackie, whichever I think of first!)... 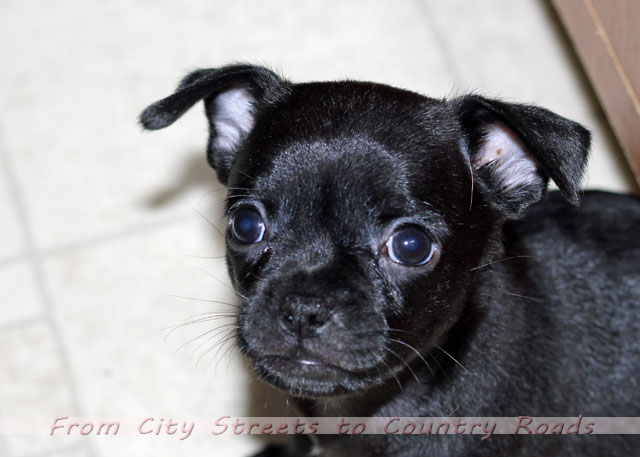 Her secondborn, Coolidge (named by the future owner)... 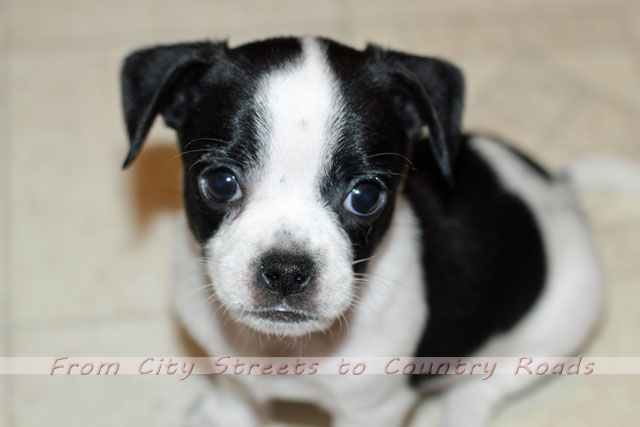 Her thirdborn, Bobbsey twin I... 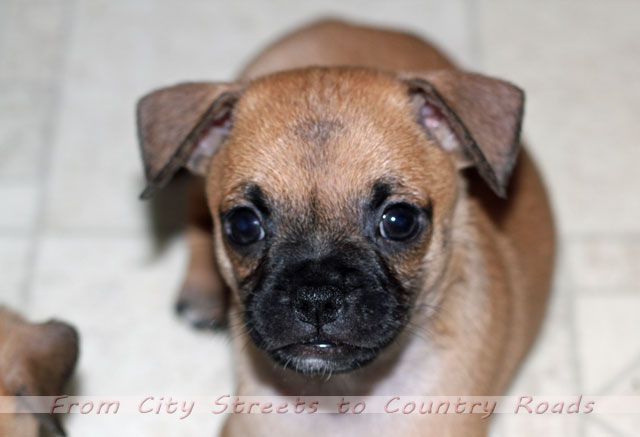 After that, I don't remember the order.  I couldn't believe she just kept on having puppies!

This is Bobbsey Twin II... Here we have Socks... 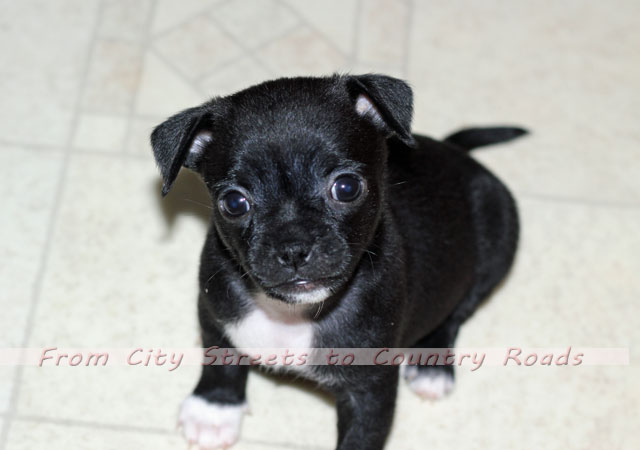 And last, but not least, (actually I think he was last) is Fuzzy... 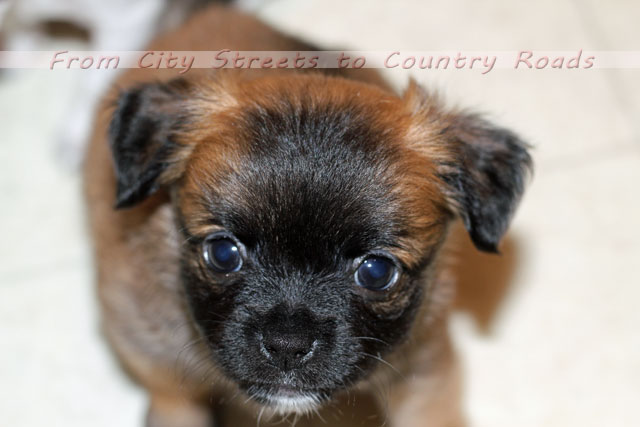 Six healthy boys.  Aren't they adorable?  I can't resist snatching each of them up whenever I'm in the bathroom and giving them lots of kisses!

I know CountryBoy told me not to name them but we both ended up giving them nicknames.  Having names helps in trying to train them (at least it helps me!).

Both Fuzzy and Coolidge have been claimed.  I'm still hoping to find some good, loving homes for the other four.

All cuteness aside, there were days this week where I was ready to pull my hair out and cry Uncle!

Every morning I was waking up to this... 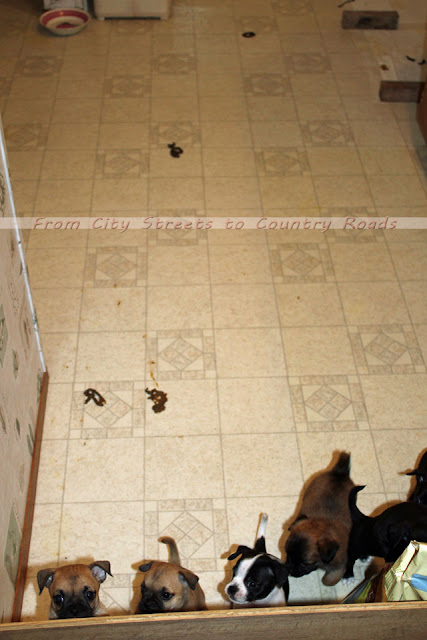 I would spend an hour, even before my first cup of coffee, cleaning up the mess, feeding them and then cleaning up another mess. 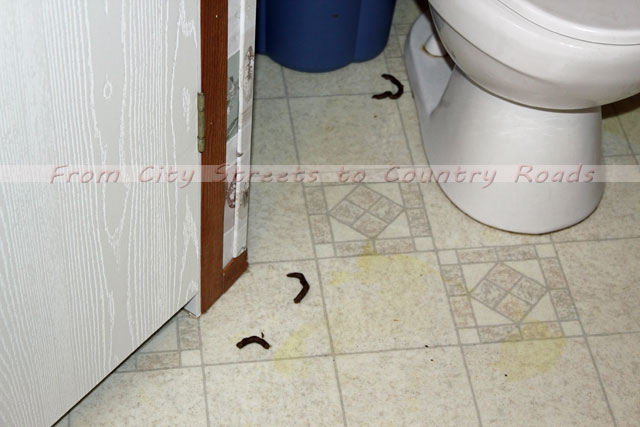 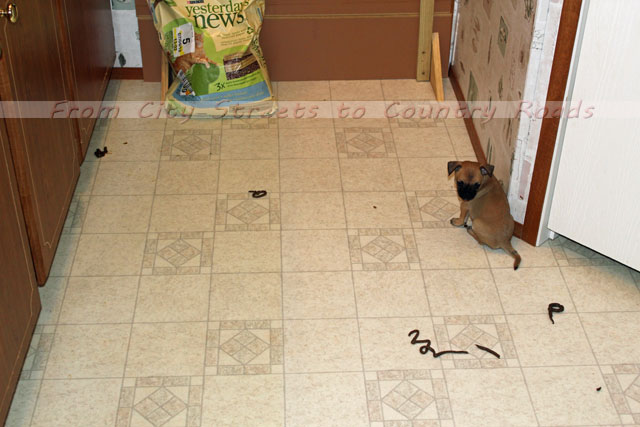 Did I mention that this was what I woke to ev.er.y.morning?  Ugh!

Not a great way to start the day, sigh. 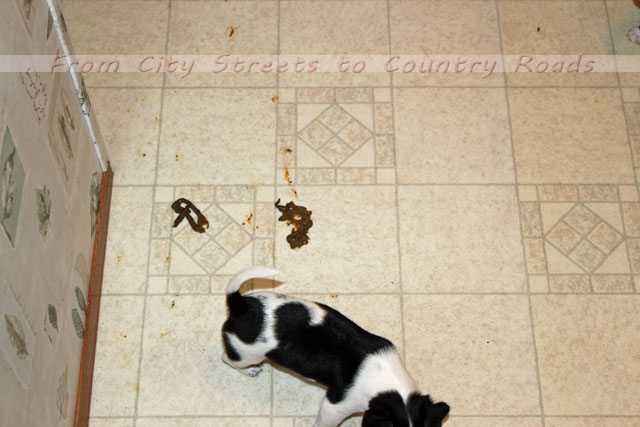 I had purchased some human pee pads for a couple of bucks at the thrift store because they were large.  And with six puppies bigger is better.  The puppies occasionally used them if they just happened to be standing on them when they needed to go.

Some friends told me to get the puppy pads and they would do better about going on them.  Supposedly there's some puppy attractant in the pads that lures them to it.

Not so with the hooligans.  For several days after having the puppy pads down I was still waking up to.a.mess. 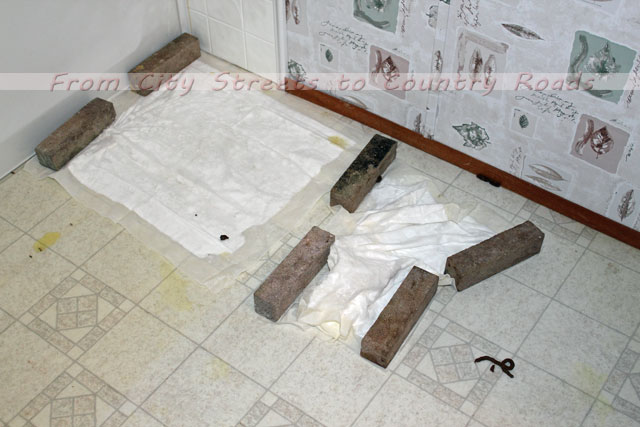 They must be more fun to play on rather than pee or poop on.

Oh, and let's not forget about the food fights! 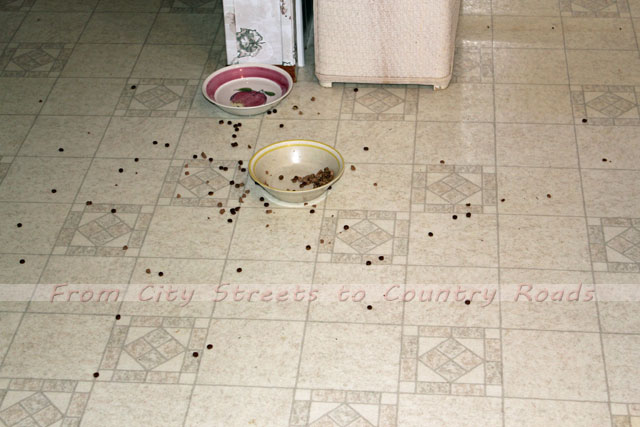 I put the puppies in the guest bathroom while I donned my Hazmat suit and went to work.  (Just kidding on the Hazmat suit.  I'm sure I needed one though!)

I cleaned up the mess one more time and then mopped the bathroom really good.  Once it dried, I put everything back in the bathroom including the puppies. 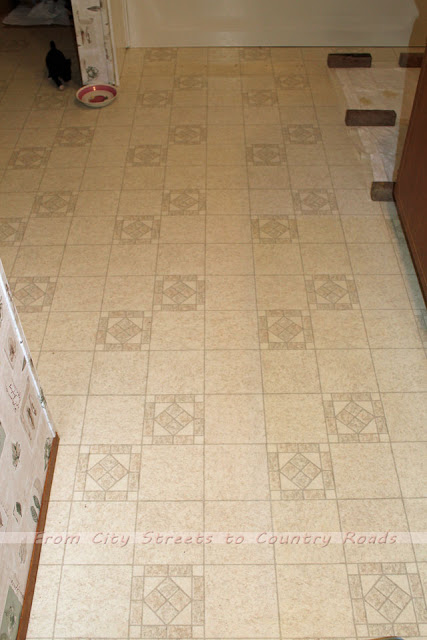 Ah, so much better.  Now if it would just stay that way, ha!

We had several more accidents throughout the evening but I stayed with them as long as possible to try and train them to go to the pads.

I've also been cleaning up the messes and then spraying the area with a homemade citrus vinegar solution to hopefully rid the smell and discourage continued messes in that area.

This morning I woke up to a lesser mess and throughout the day the messes and accidents have been fewer. Maybe we're making progress.

I sure hope so because I was about to go outta my mind!

Enough about the messes.  How bout some more hooligan cuteness?!  (Make sure your sound is on)

Email ThisBlogThis!Share to TwitterShare to FacebookShare to Pinterest
Labels: puppies

Boy oh Boy do you have your hands full with them little ones ! They are cute . Hope they use the puppy pads and keep your floors cleaner for you . I myself have never used these puppy pads I have always taken our puppies outside to do their business in a small pen or by leash and or use news papers near the door that I want them to learn to go out of and that seems to help train them to only go out side and helps to put them on a potty scheduled , I know it seems like they will never stop messing on the floors but it will they will get the idea soon ! I do hope you find forever homes for the others . Have a good day !

They are precious! We use the pads too. Start with a smaller roaming space and pads the you could increase their area and the will keep going to the pad. Good luck.

Oh my goodness! Those cute little faces!!! The mess would drive me insane. Having one puppy to potty train is hard enough; I can't imagine quintupling that! Or is it sextupling? I started not to take the time to watch the vid, but glad I did. So cute!

Oh my gosh! That cute Coolidge is a holy terror! LOL He is going to be a handful of trouble for his family, but what fun! Love all these little stinkers. Paper training them is soooo exhausting. You are doing a good thing to have kept their pregnant mama and taken on the job of having and raising these gorgeous pups. Good luck with finding them each a wonderful home. :-)