During the last year or so, I have been working on broadening my sewing skills.  I've never taken a sewing class; never took Home-Ec in school and really, was never interested in sewing at all until recently.  I was always more of a tom-boy and sewing just did not enter my mind as something I would ever be interested in.

Now, mind you, I've had a sewing machine for over twenty five years all because I wanted to make a small purse that matched my caroling outfit (Dickensian era dress) that would hold my keys and some money while on a gig.

I had no idea what I was doing but I managed to make a small purse with a shoulder strap and it worked perfect.  After that, I think I could count on one hand the times I've had that sewing machine out.

But, a couple of years ago, I decided to try my hand at making a casserole carrier like my Mom's.  She won a simple, handcrafted casserole carrier at a White Elephant Christmas party one year and she used it quite frequently.

I borrowed hers and managed to make one just like it.  Problem was, it wasn't that simple to make!  I did manage to make several more to sell on my Etsy site but they never got any easier to make so, I stopped making them.

I recently found a pattern at Joann's for Quilted Casserole Carriers that are much easier to make and I actually enjoy making them.  Once I'm settled out west, I plan on making quite a few of them to put on my Etsy site.

But, back to my old sewing machine... while it worked great for my simple projects it did not work so great for several of my recent projects.  One being the new casserole carriers I was making.

There are several layers of fabric and batting involved and when it came time to sew everything together my old machine just couldn't handle it.  In fact, it wouldn't even budge!

While I was visiting CountryBoy out west a few weeks ago, I found a quilting machine at Joann's that was on sale but since I was flying home I knew there was no way for me to get it home so I only looked at it.

Once I was home and realized that my old machine wasn't going to do the trick on the casserole carrier I decided to go ahead and get the machine.  A neighbor and I drove almost an hour to the closest Joann's.  The machine I saw out west was not on sale but would be in a few days (thanks to an awesome saleslady who took the initiative and checked to see when it would be on sale).

There was also another machine that was going to be on sale, as well, that would do quilting and more.  The sales lady was excellent and told me to check out the reviews for both machines to help me in my decision.

I chose the Singer Patchwork machine... 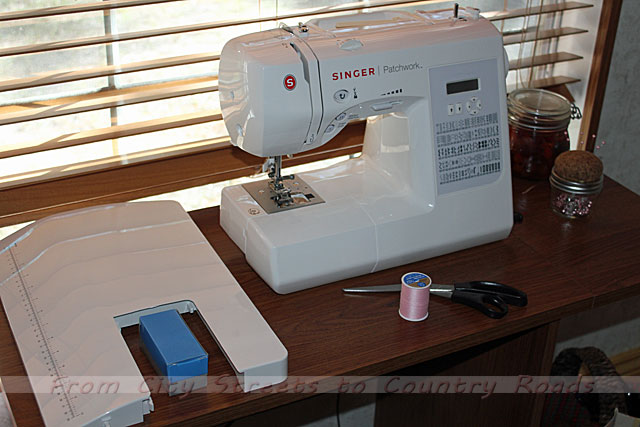 Isn't she a beaut?  It was well worth a second trip back to Joann's for a $250 savings!

I'll be honest with you, after unpacking it, I sat there and stared at it and instantly became overwhelmed. My mind said, what in the world are you going to do with that thing?!

So, after spending a day being completely intimidated by a sewing machine, of all things, I sat down and watched the hour long DVD that came with the machine.

Can I just say WOW!  This machine can do almost anything.  That is, if the operator actually knew what she was doing, heehee!

I was encouraged after watching the DVD so after attaching the even feed/walking foot I tackled finishing up the casserole carrier.

Amazing!  The many layers of fabric slid underneath the foot like buttah'!  Three quarters of the way through I ran out of bobbin thread but that was a simple fix and before I knew it that project was finished, woot!

Since I will have some time on my hands after moving west (no farm chores and a very small place to keep clean) I plan on taking some sewing classes at Joann's and hopefully I will soon be able to put my new toy to the test and see what all she can do.

When I was unpacking the machine, I was curious about all the different feet that came with it so I slid out the container in the base where they are stored and just shook my head.

All the feet and the rest of my accessories were contained in this sealed plastic bag. 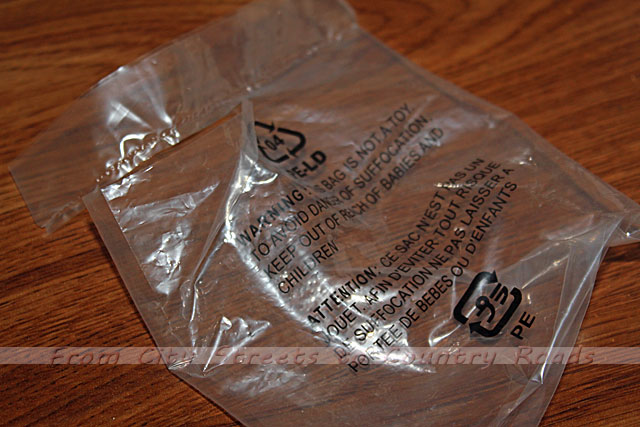 Really?  There's not even a zipper top on it.  Once opened there is no way to seal it back up so that all my bits and bobbles (accessories) won't fall out.

I didn't want to store them loosely and haphazardly in the container that attaches to the base so I figured one of my first projects would be to make some sort of pouch to store them in.

I was telling this story to my friend/sewing mentor one day when we were running errands and eating at one of our favorite cafes.  She liked the pouch idea.

After we finished eating, we browsed one of our favorite shops in the cafe and we happened upon a collection of Vera Bradley 'stuff'.  I found a little pouch (I think she labels it as a tech bag probably for cell phones) that would be perfect but I didn't want to pay the price they were asking.

My friend went to another section of the store where she found the same pouches on clearance.  She picked one out and asked me if I liked it. 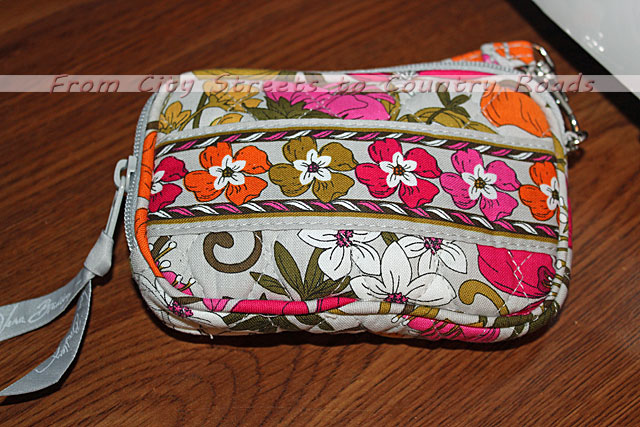 It was on clearance because that pattern is so last year, hahaha!

Anyhoo, I said I would buy it for that price but she wouldn't hear of it.  She bought it for me and openly stated that this was a bribe to try and keep me here and to not move out west.  Bless her!  I'm gonna miss that dear, sweet lady.

It's perfect for holding all my bits and bobbles and every time I see it I will think of her... 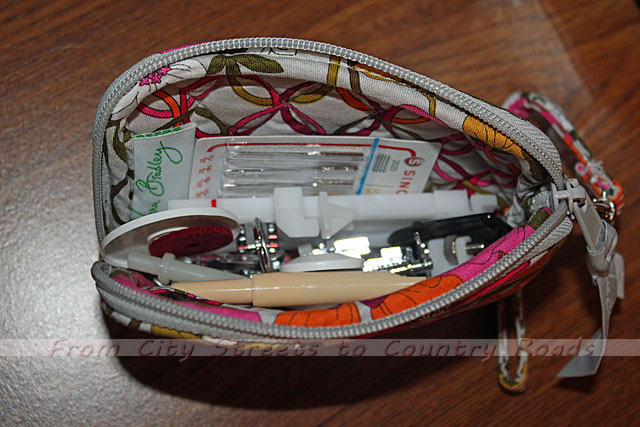 It's too bulky to fit back into the container but I'd rather have them more easily accessible so this is perfect. 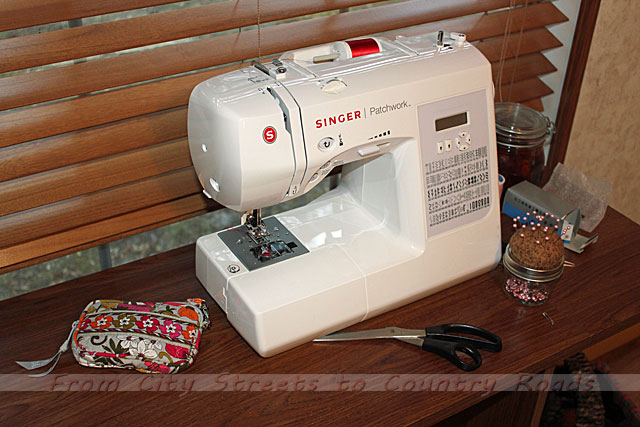 I'm planning on taking this little sewing table and trying to fit it in the 5th wheel somehow.  I think we'll have to remove the recliner in the living room to do so but that's OK.  It's not that comfortable.

I think I'm going to attempt one more project before packing her up for the move and that's making another blanket for LizzieBelle so that when one is in the wash she'll have another one to bundle up in.  I had such a time making the last one (attaching the quilt binding to the fleece) that I had decided not to make any more.  But maybe, just maybe, with this new machine it won't be so difficult.  Cross your fingers!

You sound just like me ! My mum was a seamstress and I had no interest in sewing either as I was a farm girl tom-boy to . I had to take home Ec in school and I did make a vest and a tea cozy but that was it oh I can sew and mend holes in cloths but never really got into the machine. I have had a sewing machine for years as my mum bought one for me in hopes I would get going on it well I didn't but I am wanting to make my own aprons so soon I will be going to get my material and give it a go , even Papa here knows how to sew and use a machine . Awesome job that little purse looks lovely . I bet you find it fun to be able to make and create all your own stuff ! Have a good day !

That is SEW good.

I'm happy for you. I'm glad you're going to take classes to learn more about your machine, these new marvels can do so much. One thing I did recently was to make a stitch "book" to show all the stitches on my machine. It was easy to do and is a great reference tool. I took inexpensive solid broadcloth, cut it into 8x10 pieces, ironed on some fusible interfacing, and started stitching. I used a fine line sharpie to put the stitch number by the stitches. When you finish you can sew two pages together, finish the edges by zigzagging or pinking them. I punched a hole in the upper left hand corner of each page and put them on a ring to hold them together. It was amazing to see all the stitches I had to choose from. Have fun.

I am SEW excited for you! I have a similar story as your! And when I did finally upgrade to a better machine.. boy oh boy do I get sewing done. It is so much more fun with a machine that does a good job! Happy Sewing