A couple of years ago CountryBoy and I bought a truck and a 5th wheel in hopes that he would get back in his trade as a Millwright and would be traveling from job to job.  They were a package deal as an older couple had just traded them both in for an RV.

They were in pretty good shape and the price was beyond unbelievable and we couldn't pass them up.

The job thing didn't happen right away but we now had a super nice 5th wheel to go camping, which we thoroughly enjoy doing, and CountryBoy had a truck again.  When ya' live in the country, ya' gotta have a truck!

A year ago last March he finally got back in his field of work and we are now living in the 5th wheel and the truck has traveled a few miles to get from Florida to the western part of the United States.

Little by little the truck started having some issues.  Understandably so.  After all, it's a 1997 Dodge 2500 Ram with 233,000+ miles on it!  It's also a Cummins Turbo Diesel and we're told those engines will last forevah... let's hope they're right.

With being told that and looking at a comparable new Dodge truck (with a whopping price tag of $54,000 YIKES!) we decided it would be worth it to keep this one and just fix things as needed.

So, last November, we had the front brakes replaced and the Master Cylinder.  (Always good to have brakes when going over these mountains.  Just sayin'!)

Then, the cruise control quit and the heat/AC would only blow out the defrost vents and not the front vents.

The fuel gauge quit working.  (It's kind of a good thing to know how much fuel you have since gas stations are few and far between out here.)

The interior brake and ABS brake lights stayed on making us wonder if something was wrong with the brakes again.

And the dash?  Ugh.  Initially there was one tiny crack when we bought it.  Now?  Cracked to smithereens and held together with duct tape.  At least the duct tape was almost the same color as the dash.  Sigh.

We decided it was time to start taking care of some of these issues.

If you've been following along on Facebook, then you know that it took four phases to get it all done.

Phase 1 was fixing the vacuum lines (that had two leaks in them) resulting in ice cold air blowing through the front vents and a cruise control that now works.  Parts were ordered for the brake light and fuel gauge issue.

Phase 2 was replacing the brake light sensor and an oil change.  Still waiting on the part for the fuel gauge.

In between Phases 2 and 3 I ordered a new dash and I worked on defogging the headlights.

The fuel gauge part finally came in the same day as the new dash so an appointment was made for the following week.  Fixing the fuel gauge was going to be tedious as they had to drop the fuel tank to get to where the new part needed to go.

Meanwhile, over the weekend, CountryBoy was going to see if he could install the new dash since I was told by the guy at the parts store that it should be fairly simple.  Remove the front, remove some screws and it should snap in to place.

Getting the old dash out was the only fairly simple thing about it since it was so brittle and cracked. 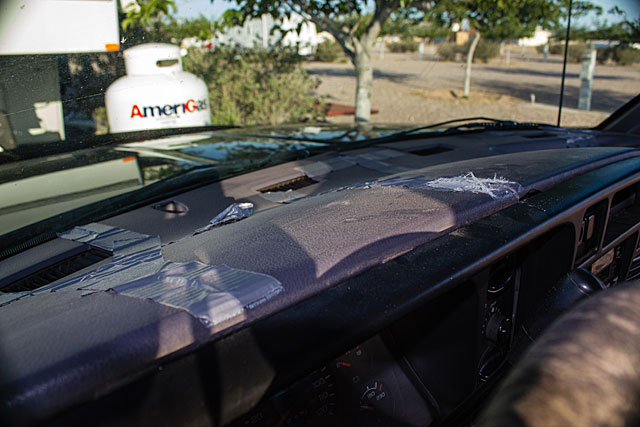 Nice!  Not.  Quite embarrassing actually.

But, once it was removed, there were tons of little screws holding the dash in place that were underneath and screwed in from BEHIND.  Whaaaaa?!  What happened to a few screws and being snapped in to place?

There was no way it could be done without removing the ENTIRE dash and ALL components which would mean it would cost a fortune for labor alone.

Ugh!  If I'da known that I wouldn't have ordered it. 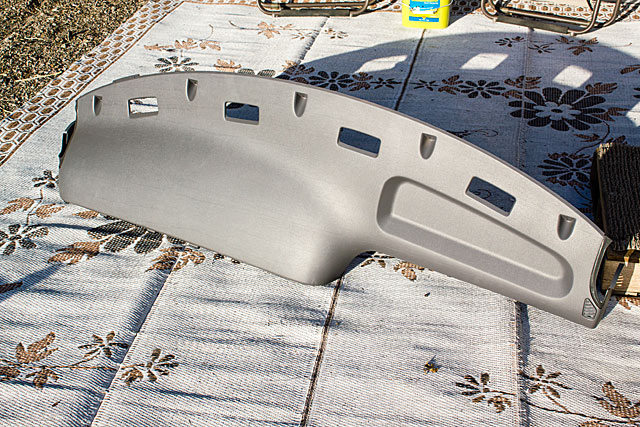 So we put the new dash back in the box and the truck looked like this for several days... 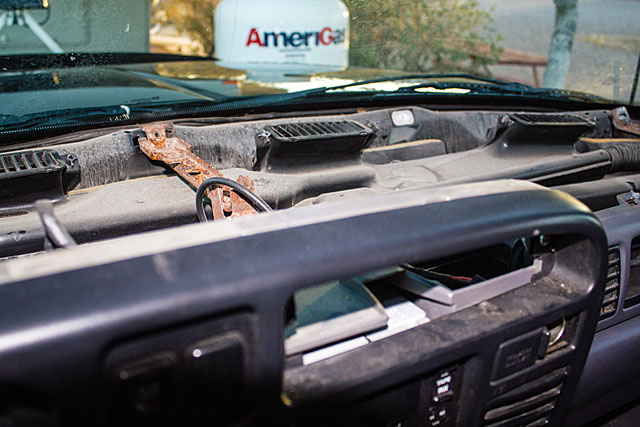 Since the old dash was literally in pieces we had no other choice but to find the best way and the best deal to have the new dash installed.

The day finally came to get the fuel gauge fixed, Phase 3, and I was crossing my fingers that the dash would get done as well if at all possible.

It took half the day to fix the fuel gauge so there was no time left to tackle the dash.  Which ended up being a good thing.

After asking around town and the service rep as to who might be able to install the dash for me, I was directed to a body shop in town.  They gave me a quote of less than HALF of what the dealer would've charged.

So, the following day Phase 4 began.

I left the truck with them overnight so they would not need to rush.  Being an older truck, we just weren't sure what they would run into while trying to install the dash.

I have to say that I am SO glad I found them!  Not only did it cost considerably less to install they also went above and beyond.  Being an older truck with lots of brittle plastic they spent a lot of time plastic welding pieces together and fixing pieces that were broken.

They also buffed some scratches out of the paint in several spots, washed the truck and vacuumed inside.  Needless to say, we were VERY pleased with their work AND with the look of our 'new' truck! 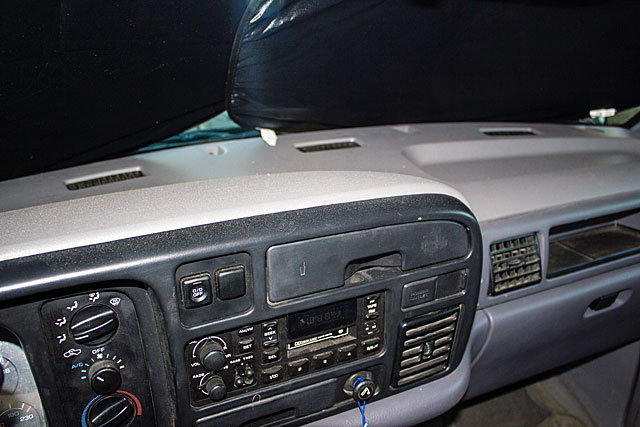 (See all the dust on the black part of the dash?  Yea, it's EVERYWHERE here.  ALL the time. sigh)

I topped off the tank while in town and smiled as I headed back home 'cruising' over the mountains with the cruise control, the AC blowing in my face and watching the fuel gauge gradually move without any brake lights staring at me while seeing a pretty, non-duct-taped dash in front of me!

Yea, it took a while to get all that done and it cost a few bucks but it was still less than a couple months worth of payments on a new truck.  Well worth it in the end.

I also want to give a shout-out to my sister-in-law who faithfully 'rescued' me each and every time I dropped the truck off.  Otherwise, my bottom would've become shaped like a plastic lawn chair and all the dealer employees would've known me by my first name.  Thanks Sis!

This morning CountryBoy headed off to work quite pleased with his truck again!

You must be thrilled with the work every time you drive the truck now. So good to hear things ended so well.

Wow, looks good. Funny I have a dash that looks exactly like yours .... '95 I bought in 2006, and would rather put money into fixing than buy a new truck that costs more than my first 2 houses combined. Besides there are things on new vehicles I do not like, such as doors that lock automatically, annoying when you are a passenger in vehicle and you need to wait for driver to open your door so you can get out and open the gate. Enjoy your "new" truck.

New vehicles are so expensive these days, it's a must that we keep our 2000 and 2004 models going however we can.

Your truck definitely had a lot of issues. Thankfully, there are skilled men nearby and all the parts needed are available, and repairing your truck became easier. I hope it will serve you well for more years to come. Drive safely!