We eat a lot of them around here.

Raw, steamed, roasted.  So far, there's only one vegetable that I've met that I didn't care for and that would be green peas.  Ew.

I have been buying a lot more fresh produce since I am decreasing the amount of store bought canned goods to store in our pantry.  (You know, due to the whole BPA that's been found in canned goods not to mention the whole sodium issue and other additives to preserve or to add flavor that our bodies just don't need and don't know how to process or eliminate thus resulting in disease but that's a whole 'nother post.)

Along with having more fresh produce on hand means having more vegetable scraps when preparing a meal.

When we were back home on the farm, I would throw the scraps in a bowl and then take them out to the chickens who happily scarfed them up in no time flat.

Since being on the road, I've just been throwing the scraps in the garbage.  It would bother me every time I tossed a scrap with the whole waste not want not going through my mind each time I did.

Thankfully, I came across a blogger who mentioned that she uses her veggie scraps to make stock but she didn't go into a lot of detail.  Since I wanted to find out how to use all those scraps I was needlessly throwing away I 'googled it' to see if I could find some more information.  Luckily, I came across THIS post.  (You can read detailed instructions there if you'd like.)

Has 'googled it' been added to the dictionary yet, ha?  It's such a commonly used term today that it wouldn't surprise if it was added.

Sorry, back to the stock...

Simply put, I began putting all my veggie scraps in a one gallon freezer bag and storing them in the freezer.

When the bag is full, I dump it into a small stock pot, add about 4 quarts of water, a couple of bay leaves and let it simmer for at least 30 minutes allowing the veggie scraps to do their magic. 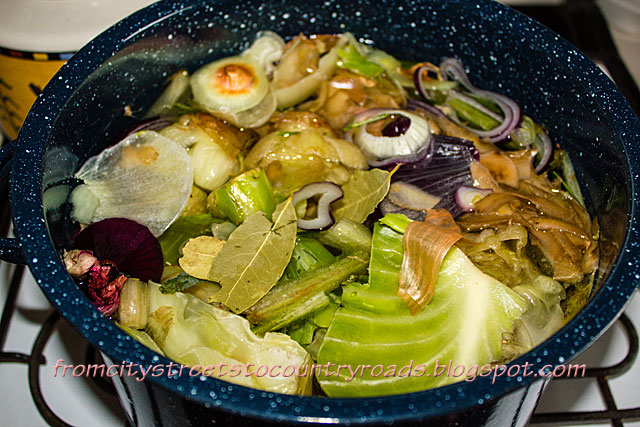 Since this will make enough stock for a couple of batches of soup I did not add any seasonings at this time, other than the bay leaves, because I want to be able to season the stock according to the soup I'll be making in the future.

(NOTE:  I added cabbage to this stock even though it's not recommended since I knew I was adding cabbage to my soup.)

Talk about delicious and so easy and cheap!  There is really no need to ever buy canned or boxed vegetable soup again saving you money.

The beauty of making your own vegetable stock gives you the freedom to use the vegetables you like and commonly eat as well as being able to season it the way you like.

Think of the money you'll save by using scraps from fresh veggies to make a delicious vegetable stock that has no extra sodium, preservatives or additives PLUS you'll be using every bit of the vegetable with no waste.  It's a win-win!

Now if only I had a compost bin...

Here's the soup I made last night with some of the vegetable stock... 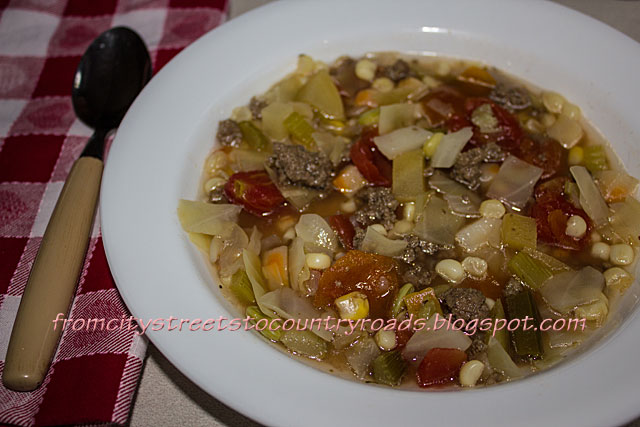 Now get to saving those scraps my friend!  It will do your body (and your wallet) some good!

Yum! And what a great idea - might have to give it a shot!

Good idea ! Looks YUMMY ! We are building our own raised veggie garden this year and the leftovers go in our compost to be re used ! It is amazing what you can do with veggies lol ! Thanks for sharing. Have a good day !

Oh how healthy and delicious!!

I did not know about the additives in can goods, so thanks for that. Great idea on making the soup stock, too! Looks yummy.