One year ago today, little Miss LizzieBelle became a part of our four-legged family. 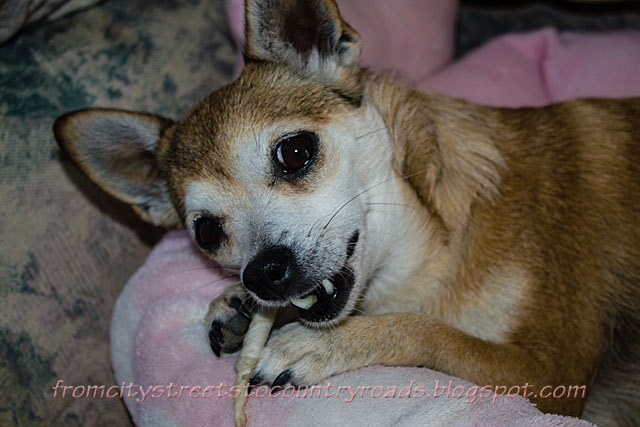 For those of you who are new here I will do a recap...

It was Vacation Bible School week at church.  The Sunday before VBS started a small dog was seen running around the church.  It was very skittish and looked like it had a disease of some sort.

I told our pastor that if anyone was able to catch the dog that I would take it to the vet and try to get it some help.

Our pastor was feeding her and eventually he was able to catch her while she was sleeping.  Thankfully, he didn't get bit!

A neighbor and I took her to the vet right before the start of that night's VBS.  The vet diagnosed her with a yeast infection, heart worms, tape worms and guesstimated that she was around five years old.  She was also in the end stages of being in heat.  Uh-oh.  That might not be good.

At the beginning of the examination he thought I should try to find the owner but further into the exam he changed his mind when he saw the neglect.

The poor girl was so sickly that she just laid around all day for the first couple of weeks... 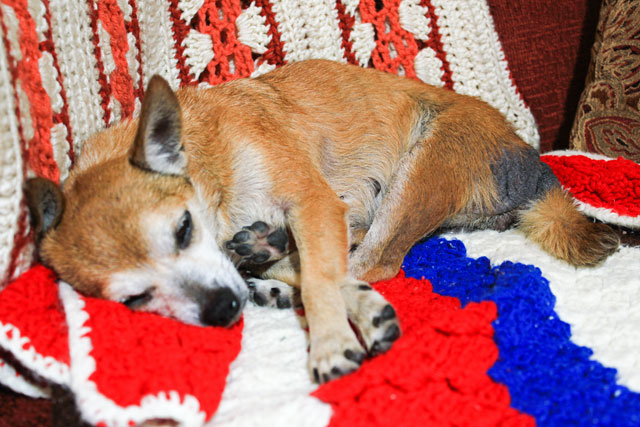 Her hind end was bald and swollen... 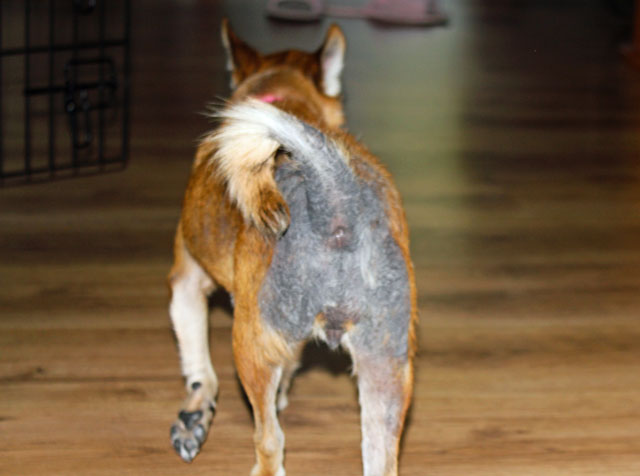 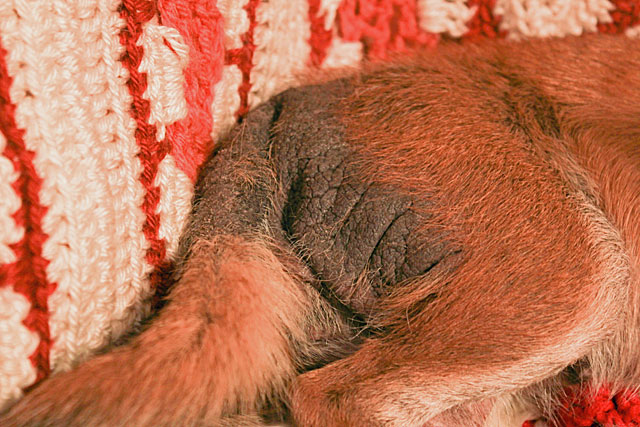 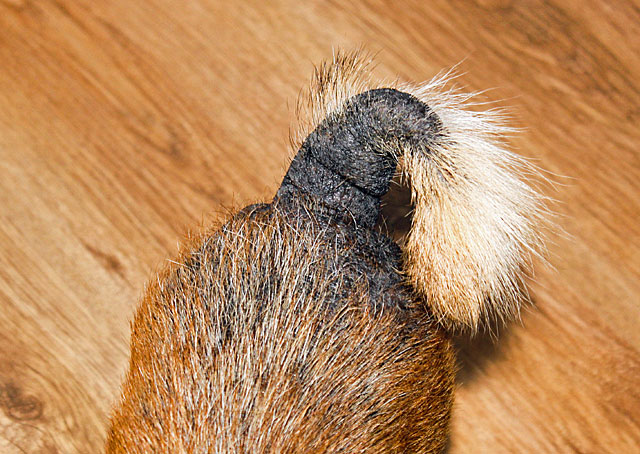 She endured long, daily medicated baths, meds for the tape worms and a weekly dose of Heartguard for the heart worms.

Several weeks later the swelling began to decrease and some hair was starting to grow... 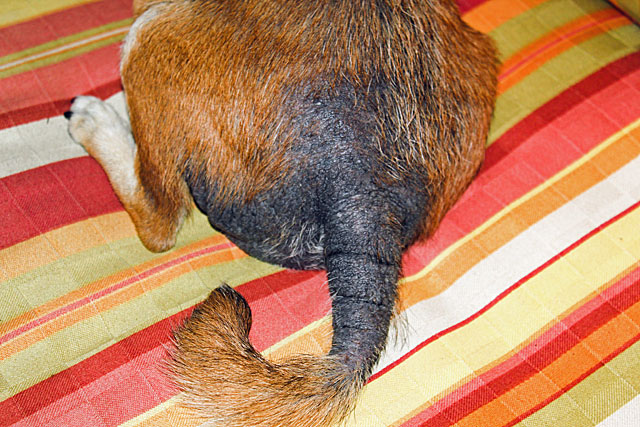 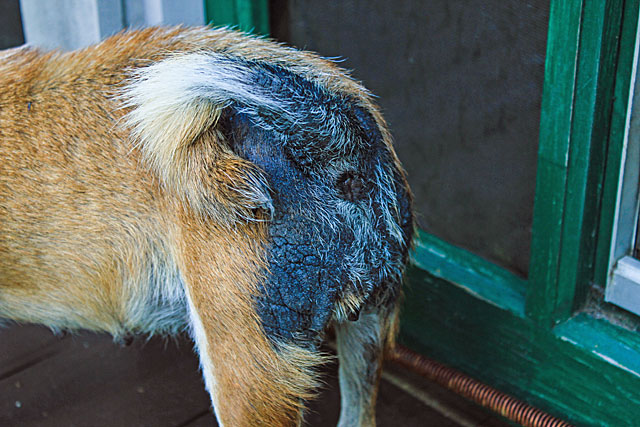 She was beginning to feel much better and was more active wanting to go outside with me and go for walks. We took it easy on the walks because she tested high-positive for heart-worms so I didn't want her to overdo it on the exercise.

Also, once she started feeling better we began to suspect that she may have been abused as well.  She cowered every time we made any sudden moves or moved too fast.  I felt so bad for her.  We made sure to talk softly to her, not make any sudden moves and give her tons of lovin'.

A few weeks later I started thinking she was getting fat due to eating well but not getting much exercise... 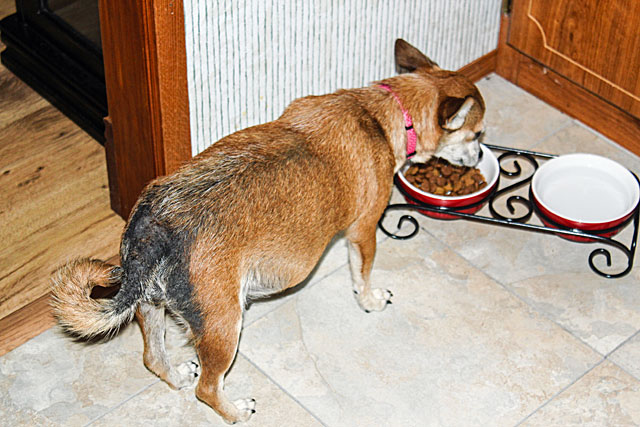 Except that the weight gain seemed to be concentrated in one area.

YIKES!  Could she be pregnant?  Please say NO!

I took her to the vet and she confirmed my worst fear.  sigh.

We stopped her medications and waited.  Thankfully, the tape worms and yeast infection were gone.

We continued our casual walks around the neighbor while she got bigger and bigger... 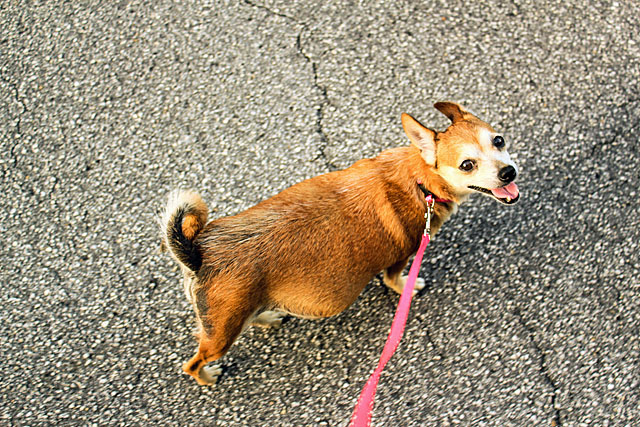 I had no way of knowing who the daddy (or daddies) was and could only hope that she bred with somebody about her size.

But, she was just HUGE and I was afraid for her during birth.

Here she is the day before she gave birth... 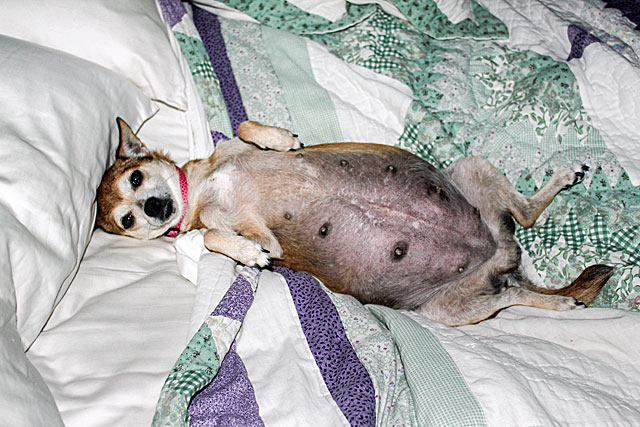 Just chillin' on the bed!  (She looks like she swallowed a football!)

The next morning she easily gave birth to seven puppies.  Yep, my little LizzieBelle was carrying around seven puppies in that little belly of hers!  Six of them were chunky and healthy; sadly, the seventh was not fully developed and only lived a few minutes (broke my heart).

But Miss LizzieBelle (and I) would have our paws/hands full with the six survivors... 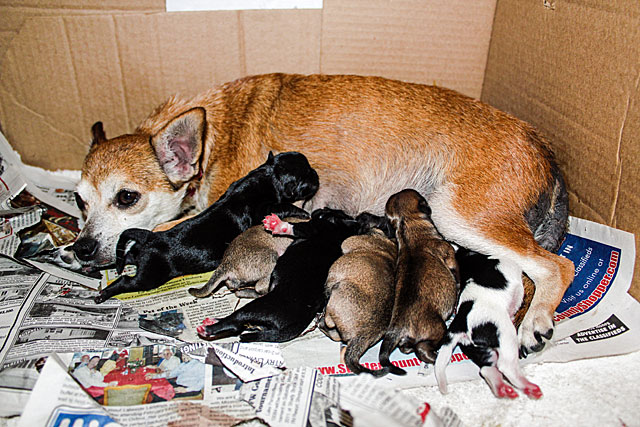 The vet was amazed at how healthy they were considering the state LizzieBelle was in a few months prior.

She was such a good Mommie too.

Once the puppies were weaned LizzieBelle started back on her weekly Heartguard meds and thankfully, the puppies all went to good homes a few weeks later.

Her latest heart worm test showed fewer heart worms so she now has her Heartguard once a month.  But we still had a ways to go to completely eliminate them.

Today, I believe she trusts us to love her and take care of her.  She also looks like a normal dog with even her belly all covered with hair... 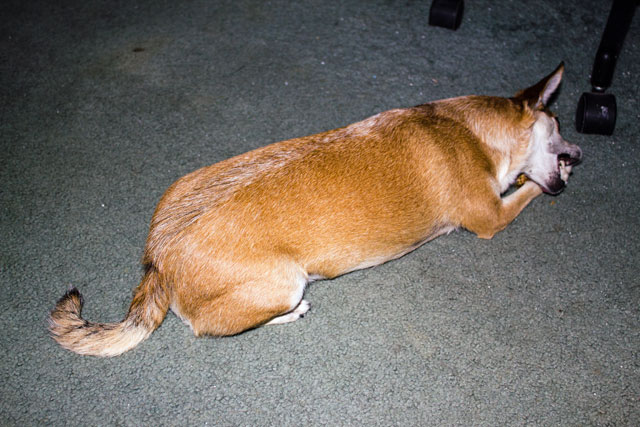 I don't know when her real birthday is so I have chosen the day she graced us with her presence to celebrate. 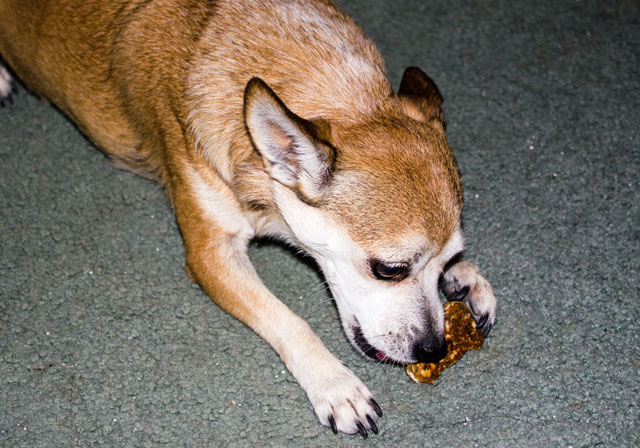 She is such a joy to have around and is a really good dog.  We are lucky to have her.  Hugs & kisses Miss LizzieBelle!

This story brings tears to my eyes, she is so sweet and you are a dear to care for her. She looked so dreadful and sick when you first got her. I know she is a big blessing for you. She even had a spotted puppy, cute.

Happy Birthday LB .... such a difference a year has made. I am sure most people would have given up and not gone to the time and energy not to mention money you spent to get her to this point. I hope the vet gave you a big discount on all of this.

Happy B day pretty LizzieBelle . I am so glad you found each other . Have a good day !

Happy Birthday, LizzieBelle!!! In rescue, there are often stories a lot like hers. I tell folks this ... the road to a dog's forever home may not be an easy one, but they must travel that road until it leads to their people. LizzieBelle was destined to be yours, it just took her a while to get to you. All she knows now is love, and that's the only thing that matters.