I've been accused of constantly rearranging rooms, furniture, pictures, whatever, when we lived in our house and rightly so.  CountryBoy would come home from work and things would be in a different spot.  I would continue to arrange and rearrange until I felt the space/room was being utilized in the best possible way with what we had and yet comfortable with that 'lived-in' cozy look.

Now that we're living in a small space, a 31 foot 5th wheel to be exact, one needs to be willing to change things up in order to best utilize the space.

There's not much that can be done with furniture placement but how I use the furniture that is in there and the cabinet space available is what I take in to consideration.

When I joined CountryBoy out west almost six months ago I insisted on bringing a small desk that I would use as my sewing table.

CountryBoy wasn't sure it would fit but I knew I could/would make it work.  (That's just the way I am when I get something in my head *smile*!)

I put the table/desk in front of one of the windows where the recliner used to be and moved the recliner closer to the end of the couch leaving a direct, but narrow, walkway from the bedroom/bathroom to the kitchen.  (I never liked the recliner there anyway.  It was in the way of getting in and out of the door and you couldn't see the TV from that angle.) 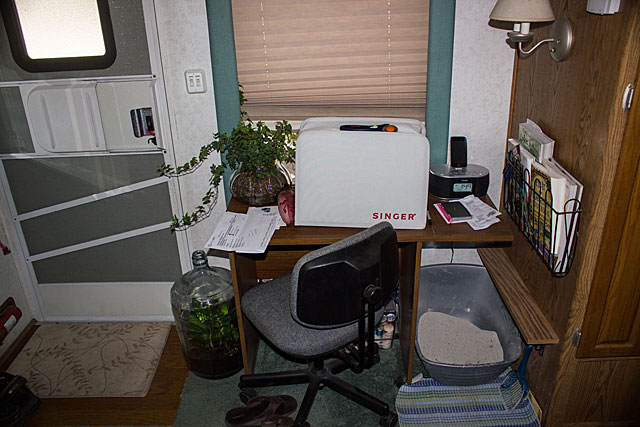 The table/desk fits well in this corner with the kitty box tucked nicely out of the way.

As I sat on the couch opposite the sewing area this past weekend doing some crocheting (image that!) it dawned on me that I am not utilizing this space very well.

After all, I've not used the sewing machine in a while since I am busily crocheting items for my Etsy store.  But, I DO use my computer on a daily basis several times a day and sometimes a good bit of the day if I'm editing photos or doing some design work. 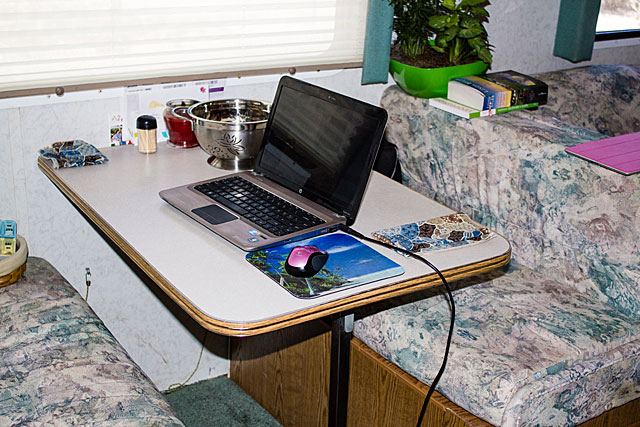 ... which has worked fine but I am constantly moving the computer at dinner time or when I need the table for something throughout the day.  And the power cord?  The outlet is on the wall under the plant so the cord hangs down ,wraps around and behind the bench and it's difficult to plug in and out if necessary.  I do not get it out again after dinner because I would have to put it back up since CountryBoy uses the table when he's packing his lunch in the mornings.

And the weekends when CountryBoy is home?  Forget about it.  I just didn't even bother getting it out.  With two adults, two cats and a small dog the space gets even smaller really quick.

Then he wanted me to look something up over the weekend.  I got the computer out and left it out for a while but then had to put it up when it came dinner time.

That's when an idea hit me later that day as I sat on the couch looking at the sewing area....

So yesterday I put the sewing machine and sewing box in the closet, cleaned up the whole area (it gets rather dusty from the kitty litter) and proceeded to see if I would like using this space as my 'office'. 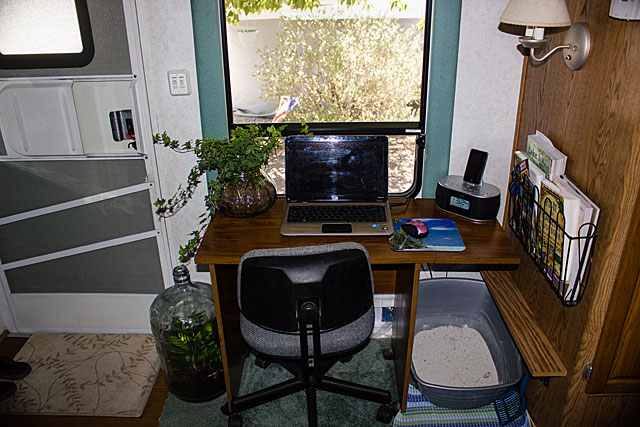 What do you think?  I'm liking it.  I can leave the computer out all the time, I can see the outdoors and I can also watch my birds flock to the feeder and get drinks from the bird bath while I'm browsing or being creative.  And when I want to do some sewing it will be easy enough to move the computer and get the sewing machine out.  (And no, I don't even know the kitty box is there even after it's been used!)

This time when CountryBoy came home from work and saw the new arrangement I got a rousing 'that looks good.  I like it!'  Whew!

Now for that cabinet above the stove...

I love it - especially since it means I might just be able to "converse" with you on the weekends now! :)

Sweet Suzi-
Your beautiful scarves made their way to me this evening --- I am so grateful -- thank you from the bottom of my heart. They are more than beautiful - they are truly gifts of heart. Your generous donations will touch the lives of women -- perhaps in a way that you might not have thought possible.

I will photograph them later this summer -- watch my blog for the early summer editions to be posted soon --- yours will be in the next edition:)

I love you for doing this~
Vicki

I would love to see your scarves that the previous lady wrote about.
And I am curious about your 5th Wheel lifestyle. It was a former dream of my husband and I until the gas prices went through the roof. Now we are content with being at our home. :o)