If there is one food that I really, really like and could eat every day it would be potatoes.  Mashed, baked, twiced baked, boiled, oven-roasted, fried, in potato salad, you name it I like Po-ta-toes!  They are definitely a comfort food for me.

Over the years potatoes have gotten a bad rap and if you're on a diet then, most likely, the diet recommended avoiding potatoes because of the carbohydrates in them.

In actuality, potatoes have many health benefits and are an excellent source of fiber, vitamins such as B6 and C, and minerals such as copper, potassium and manganese that together help protect against cancer and promote heart-health.  You can read more about the health benefits of potatoes by clicking HERE if you'd like.

That's awesome news for me, a potato lover *smile*!

Yet, even though I love potatoes I don't fix them very often (but I just might start fixing them more since they're good for you!) but the other night I wanted some potatoes.  CountryBoy was grilling some Buffalo ribs for himself and since I'm not much of a meat-eater I opted to just eat the side dishes.  Mainly potatoes!

I decided to roast them in the oven.  I washed and peeled them (only cuz they were older and getting wrinkly otherwise I would've left the skins on), chopped them into chunks, dropped them in a gallon baggie, drizzled some olive oil over them then added several tablespoons of homemade ranch seasonings, zipped the bag up and shook it until the potatoes were evenly coated.

I poured the potatoes into a baking dish and popped them in the oven. 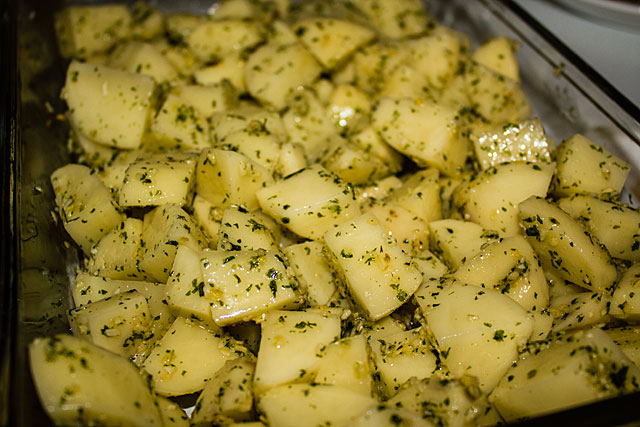 Have I mentioned how much I like potatoes?  Ha!

I baked them for about 30 minutes at 350 degrees.  Most recipes call for 375 degrees but in my tiny oven in the 5th wheel I have learned (the hard way) that it cooks hot and fast so I turn the temperature down, allow less time and watch it!

I stirred the potatoes about every 10 minutes and after about 20-25 minutes I turned the temperature down even more to let them cook slower.

They turned out perfect and oh so yummy! 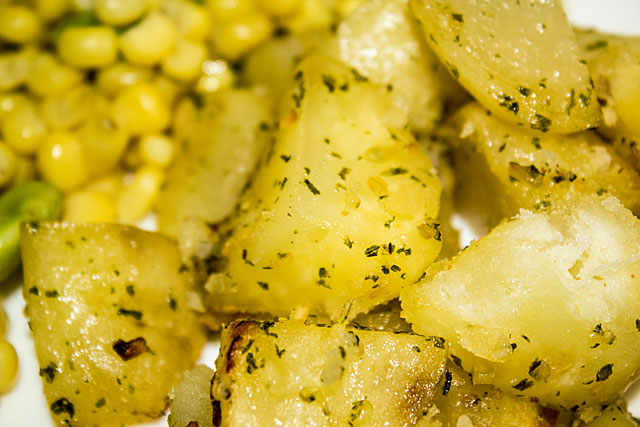 While CountryBoy knawed away on his Buffalo ribs I enjoyed my plate of roated potatoes, succotash and a nice salad.  Now that's good eatin'!

In fact, a coupla weeks ago, CountryBoy brought up the subject of my lack of desire to eat any meat.

CountryBoy:  You did not disclose the fact that you are a vegetarian before we married over 13 years ago.

Me:  I'm not a vegetarian.  I eat chicken, seafood, some pork and ground beef.

CountryBoy:  You might as well be cuz you'd rather not eat it.

And, just for the record, it was his idea to eat meat only twice a week.  Sounds good to me!

Back to the potatoes, if you're interested in the ranch seasoning mixture here it is:

Mix together and store in an air tight container.

Note:  I haven't made the dressing yet as I want to make my own mayonnaise first but haven't gotten up enough nerve to do that yet.  But, I have made the dip and it's awesome!  So, go ahead, whip up some dip and start dipping those veggies in it, mmmmm!

I like making my own dry seasoning mixtures because I know what's in it and there are no preservatives or hidden chemicals.  Plus, it's so much cheaper in the long run.  Tasty and cheap?  Yea, I'm good with that!

Another comfort food both CountryBoy and I enjoy is chocolate.

While we were dating, I made the mistake of offering him some of the Cadbury chocolate that I had brought back from one of my trips to England.  Men aren't supposed to like chocolate as much as us women do so I thought I would be considerate and offer him some thinking that he would eat a bite or two to be polite then turn the rest down. But, that chocolate is A-Maz-ing!  So smooth and creamy with no wax fillers.  MMMMmmmm!  He loved it.  And ate every piece I offered him.  Uh-oh.  Better hide my chocolate stash and ration it out to him *snicker, snicker*.

Several months later, he and a buddy were heading to the Florida Keys to do some fishing.  I bought him a rather expensive jug of Peterbrooke Chocolatiers Chocolate Covered Popcorn for their trip.  (Hey, we were dating and still trying to impress and all that!)

He took it with him but forgot about it.  Wha????? How can you forget about chocolate?!  Well, he did.  After the trip, he remembered the popcorn and finally opened it up and ate some.  He thought it was awesome!  (He was glad he forgot about it so he didn't have to share it with his buddy.  Stingy fella.)  The perfect combination of salty & sweet.

We bought one or two more jugs after that but the stores and outlets were hard to find and they were quite pricy.

Over the weekend, he wanted some chocolate covered popcorn.  He had popped a bag at work (not the healthiest, I know, but it's convenient while at work and it's an occassional treat) before heading home.  On Saturday, he melted a couple squares each of Vanilla and Chocolate Almond Bark and drizzled it over the popcorn that he had poured onto a cookie sheet. 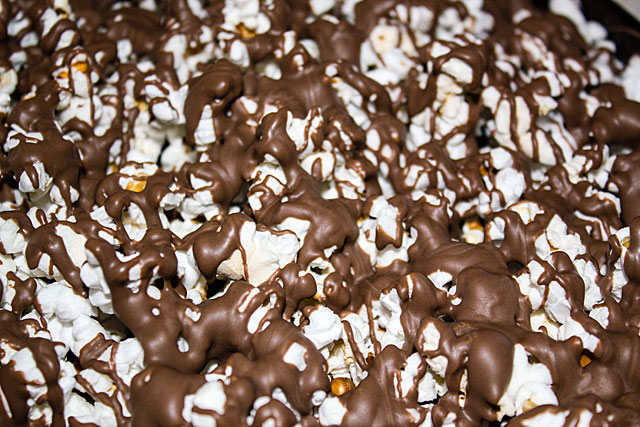 Once the chocolate hardened, he broke it up into chunks and we gobbled it up that day.  What a treat!

Those are a couple of my favorite comfort foods.  What are yours?

I am a lover of potatoes too! My husband will eat them but prefers rice and no matter what I do to rice it's just boring. I vote potatoes!!!

I really do like seasoned rice as a side dish. Your potatoes look great!

Those potatoes sound wonderful! My husband likes rice with gravy more than potatoes.

Roasted potatoes are always a hit here! They sound great:@)

Mmmmm....roasted potatos. You should find a recipe for the seasoning that they use in Greek restaurants for their roasted potatos. These days, my comfort food is probably my Chike protein shake. ha!

Definitely chocolate but I love some potato too! My husband has been off all sugar, wheat, tea, coffee, beef, dairy etc etc for months to help his allergies and eczema. It seems every time he eats potatoes his skin flares up so he maybe needs to avoid them - as well as chocolate an other goodies. Heading into winter here when you're more inclined to look for comfort food too!

I'd never heard of chocolate covered popcorn - we only have it with oil/butter and salt (again DH can't have it - no corn allowed so he misses out once more).