During our trip, CountryBoy wanted to drive through Oregon rather than turning around and going home the way we came.  (We'd also been wanting to check the state out for homesteading possibilities.)  So, he decided to 'cut through' Yellowstone National Park.  It was an unexpected surprise for me as I'd never been there.

When CountryBoy and I travel, quite often we usually wing it.  We set out with a general plan in mind but nothing is set in stone which allows us the freedom to check out anything that comes our way.  (Being flexible also stops us from getting our panties in a wad when things don't go according to our plans, ha!)

Teton National Park and Yellowstone National Park are right next to each other and, thankfully, we were able to get into both parks for the price of one for our 'cut through' adventure.

As we were driving around we noticed many bare trees; some still standing and lots had fallen down. 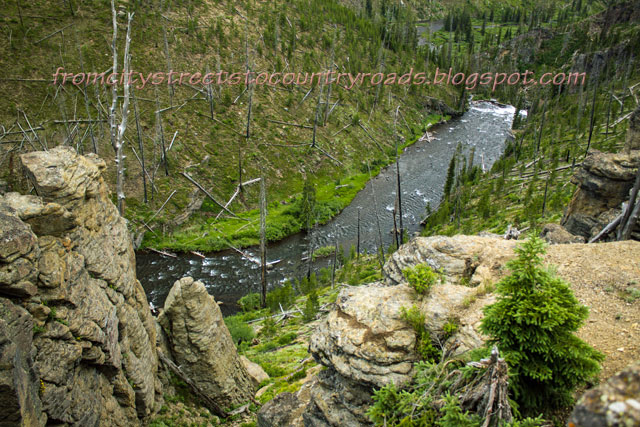 At one of the stops we read where there was a devastating fire in 1988 affecting 793,880 acres of Yellowstone.  Our visit was on the heels of the devastating and fatal fires of Arizona.  It made the tradegy all too real and my thoughts and prayers immediately went up for the families of the 19 fallen firefighters.  Thankfully, there were no fire-related deaths in the Yellowstone fires of 1988.

When we arrived at the site of Old Faithful, we had apparently just missed the latest eruption.  I was too hungry to care about eruption times so we stopped at the cafe for a bite to eat before venturing over to the geyser.  In so doing, we were one of the first people at the benches to sit and wait for the next eruption.  We had no idea when it would erupt again (nor did we care) so we sat and waited and enjoyed the scenery.

Before long, the benches started filling up and people were saying it was 'scheduled' to erupt in about 30 minutes give or take ten minutes. 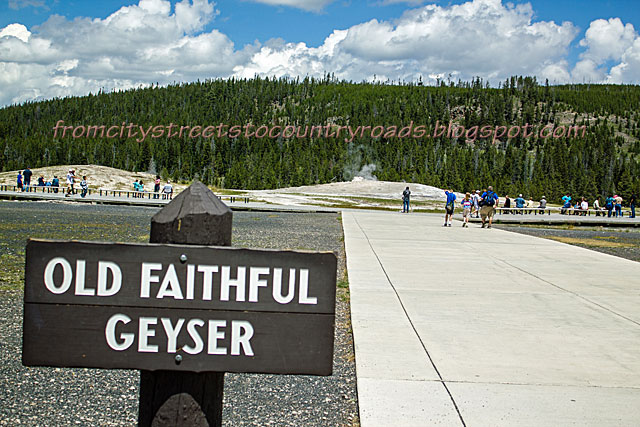 Constant steam coming out of the geyser... 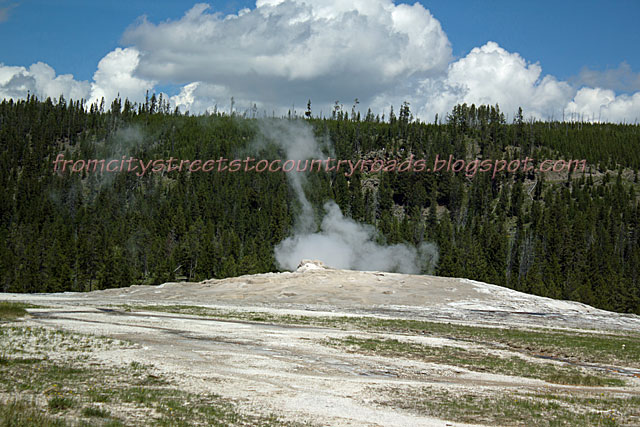 CountryBoy had seen Old Faithful before so he knew that shortly before the geyser erupts it would tease us for a while sending up small water spouts and then disappearing... 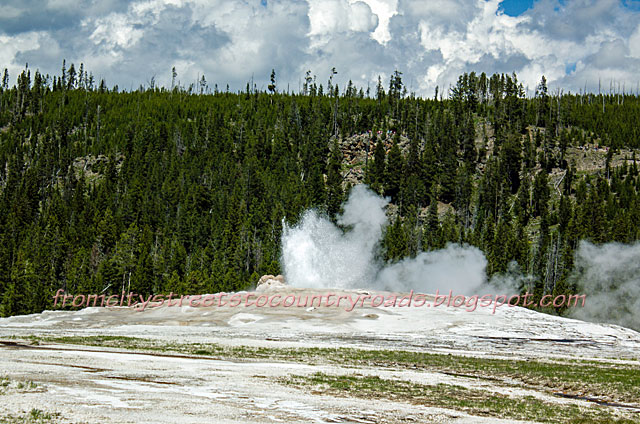 Until at last... there she blows! 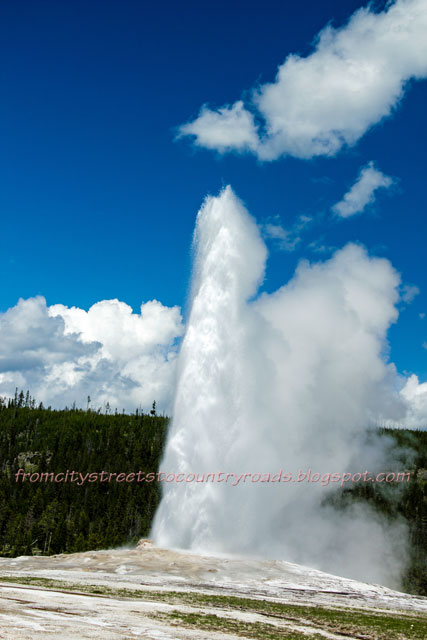 She erupts at full force for several minutes before slowly dying back down... 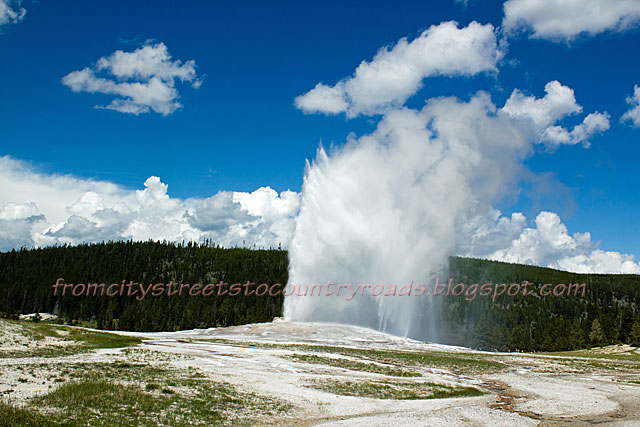 What a spectacular force of nature!  Although I don't want to be anywhere near it when she really decides to blow her top!  The devastation will be felt and seen for hundreds of miles around.

After the eruption we continued on through the park headed for the west exit. 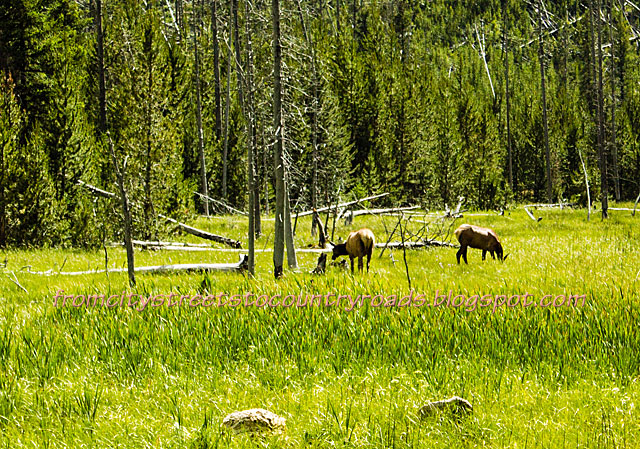 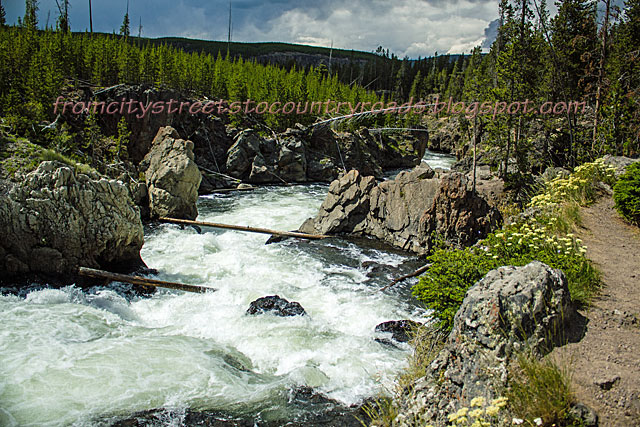 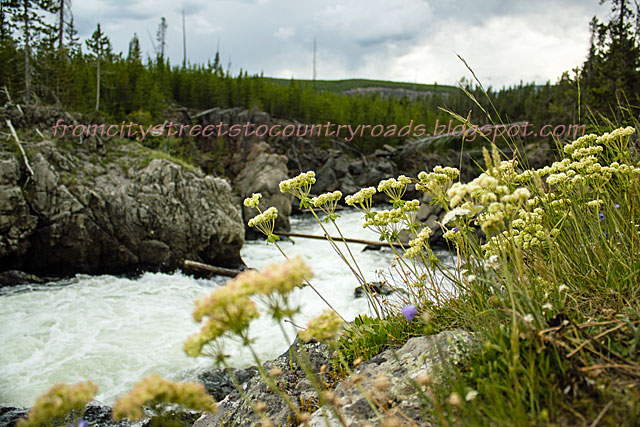 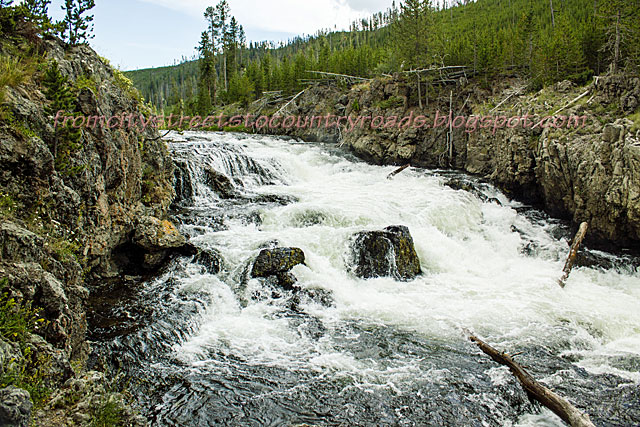 and the beautiful Yellowstone River... 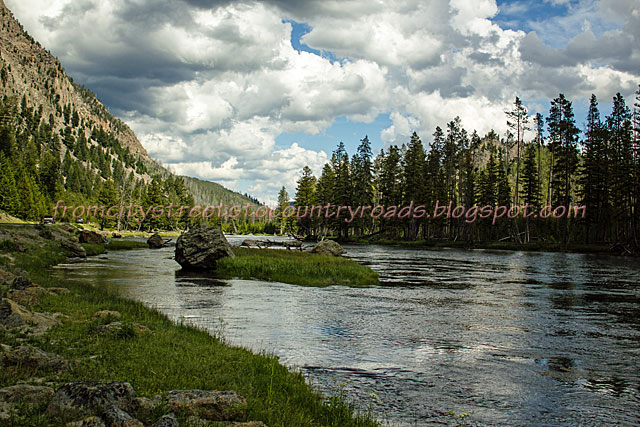 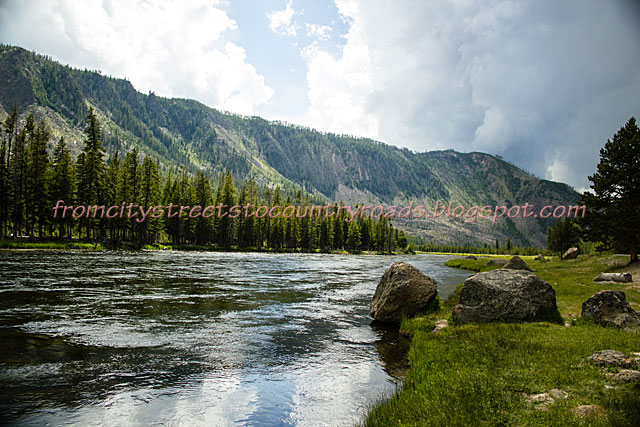 After exiting the park we headed west.  We drove through an extremely desolate part of Idaho; a beautiful, mountainous area of Oregon; saw lots of farmland; witnessed miles of nothing but lava rock and saw several volcano-shaped mountains.

One such mountain was Mt. Shasta in northern California.... 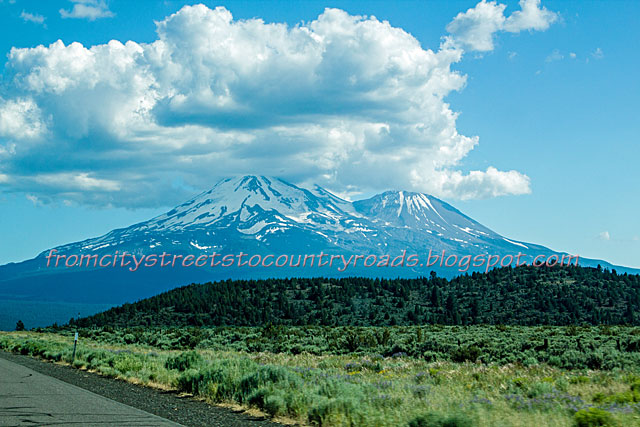 We circled this mountain for miles.  We had seen a small amount of lava rock surrounding this mountain so CountryBoy kept his eye on it the entire time it was in our view especially after seeing the devastation an eruption causes.  He has a healthy fear of volcanos and this region is loaded with them.

All too soon we were back to the desert and triple digit weather.

It was a wonderful escape from the heat and the views were spectacular!

A couple of thoughts about traveling out west...  there are more desolate areas than populated areas.  And the populated areas are, most times, very small towns that provide no services and are miles and miles apart from the next town that has no services. When heading out you'd best be prepared with a full tank of gas, (an extra gas can would be advisable too) have snacks or something to munch on because restaurants are few and far between as are gas stations and motels.  (You might want to throw in a roll of toilet paper too.  Thankfully, it never got down to that, ha!)  Traveling out west is so very different than traveling the eastern part of the United States where it is densely populated and every time you turn around there's a town or city.

It was definitely a wonderful trip and experience and I'm so happy we venutred out on our Whirlwind Trip!

Oh, and homesteading in Oregon?  We concluded that there are lots of beautiful areas and land but not enough water to provide a good water source directly on your property.

Really great scenery shots. You have a good photographic eye. Keep them coming. Love ya.

Wow! That was some trip!! We too like to be a bit free wheeling. Usually I do a lot of research ahead of time, so that we don't drive by something and miss a great moment. But, aside from that....it's just plain fun to explore off the beaten bath.
~Diane | AnExtraordinaryDay.net

Loving the photos of Yellowstone. I'm looking forward to my husband's retirement (in about 9 years) so we can visit some of these scenic areas in the U.S.

You took great photos -- and the scenery in Yellow Stone is as beautiful as I remembered it being and the Teton - that's my favorite area.. I have wanted to homestead in Or -- too but it seems I no where closer to that goal.. Oh well we go where the work is..and make do..
I've enjoyed your travel photos..
Hugs

The photos are breathtaking!