Getting A Handle On Paperwork

Is it just me or does there always seem to be a pile of paperwork in your house that needs to be dealt with?! 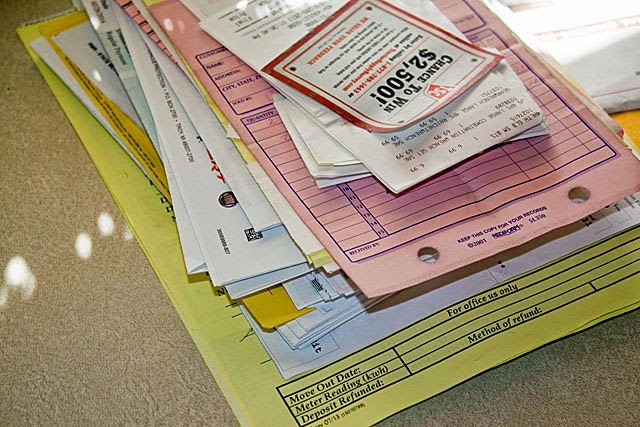 So, in my quest of simplifying our life and my penchant for organization, I have decided that it's time to knuckle down and get the paperwork simplified, organized and under control!

We began simplifying by reducing our debt.  The less we owe the less paperwork. A definite 'win' in my book!

Next, I began to research ways others were dealing with their paperwork issues.

I found quite a few people using a binder system. 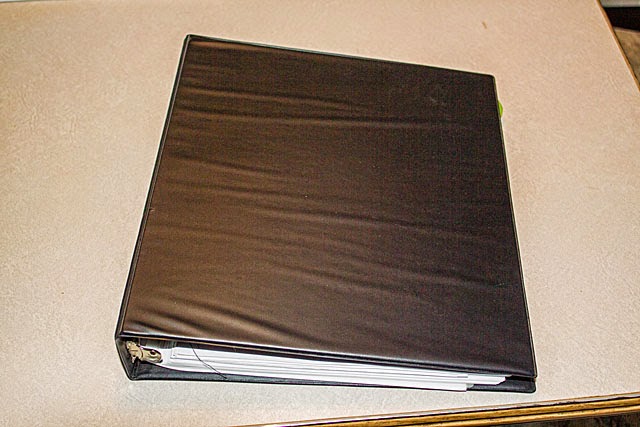 I liked that idea simply for the fact that everything is in one place when it's time for me to pay bills.  All I have to do is grab the binder, sit at the dining table, pay the bills, then file them right in the binder.  BAM! Done.

So, I began to think of other things I would like to include in my Home Binder to help me simplify, be organized and efficient. 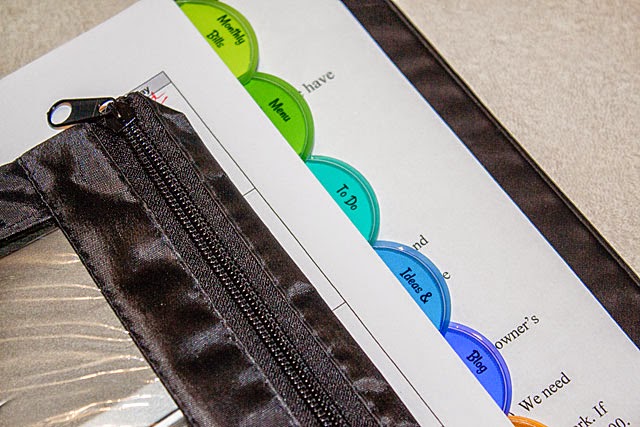 Eight sections including Monthly Bills, Menu Planning, To Do, Ideas & Projects (cuz I always have tons of them floating in my head!), Blog, Etsy & Redbubble, www, and a Travel Checklist.

(Note: in keeping with my 'make do' motto I used a binder and pouch that we already had.  Granted, there are tons of pretty binders out there that I would've loved to have but it really wasn't practical.  I would've spent money on a pretty new one and then turned around and donated the plain one to a thrift store due to storage issues.  Practical? Not in the least.)

Moving on... In the front of the binder I have a zippered pencil pouch for a small calculator, stamps, a pen, a red pen and a pencil. 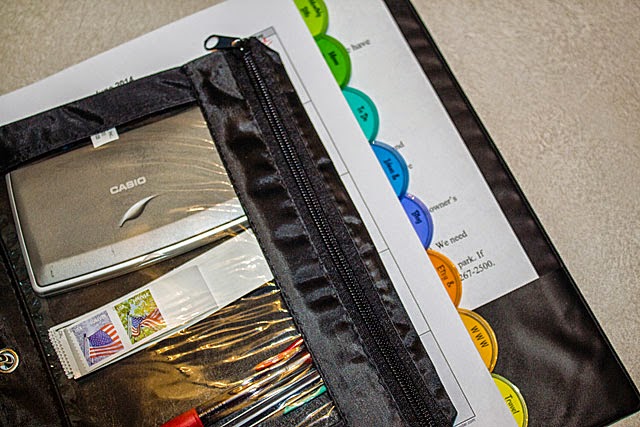 Behind that is a monthly calendar. When a bill arrives in the mail I notate when it is due on the calendar and then place it in the front pocket of the binder.  Once the bill is paid I cross through the original notation in red ink and write in the date it was paid.  After that, I punch holes in the statement and file it the Monthly Bills section.  I will keep three months worth of statements in this section. This will help cut down on the amount of accumulated paperwork and since it's all right there I can purge them easier and sooner than I would if they were hidden in the file box.  Also, once I have reconciled the checkbook I file the bank statement in this section as well. 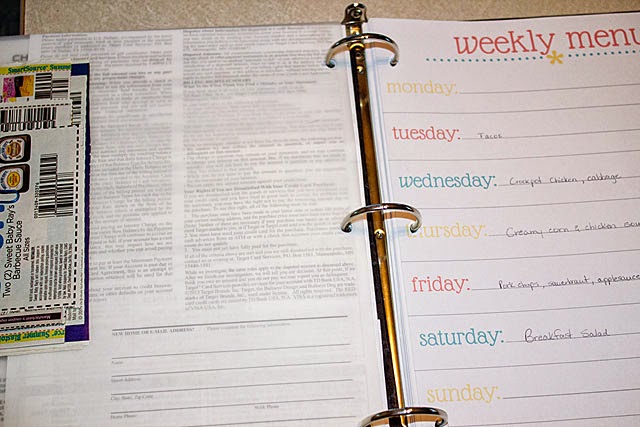 Currently I am planning one week's worth of meals at a time.  In the near future, I would like to plan two weeks at a time so that I have go to town only twice a month.  There are several reasons for that the first being we only have one vehicle and second, the fewer times I'm in town the less money I spend!  The only drawback of shopping for two weeks is figuring out where I am going to put it all!  Even though we have two refrigerators the two of them combined don't equal up to even the smallest of refrigerators found in a house! But, I will eventually figure it out and it will help a lot.

I don't usually use very many coupons (because there aren't too many coupons for 'real food' (wink!)) but occasionally I'll find a coupon or two for something that I typically buy. When I have coupons I simply secure them with a paperclip to the sturdy tab of the Menu Planning section.

Once I start planning for two weeks here is the form I will be using... 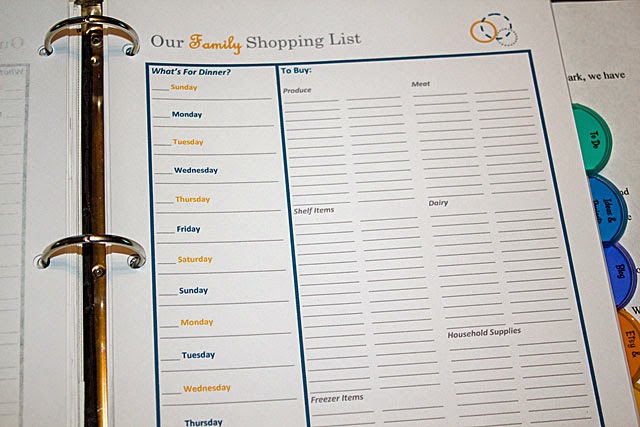 I always seem to have a To Do list.  Whether it's just jotting something down so that I don't forget or if it's a list to keep me on track I find a To Do list helpful.  Mind you, I don't use the list to berate myself if I don't get everything on it finished but it does feel good to see some of the items on there checked off! 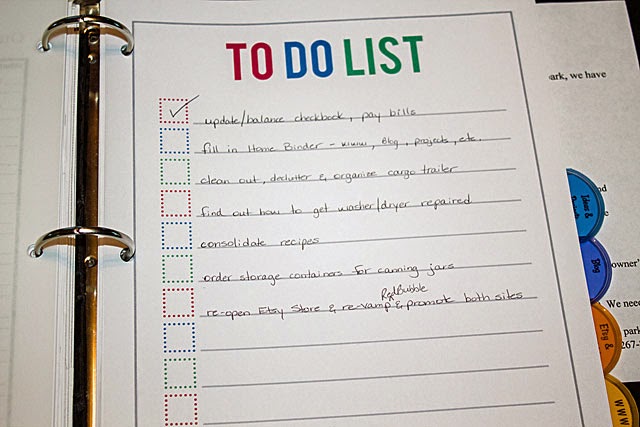 And since I always seem to have ideas and projects floating around in my head I decided to have a section just for that.  A place where I can write them down and get the thoughts organized by figuring out the scope of the project, deciding what I need and to keep track of the cost of the project in case it's an item that will end up on my Etsy site. 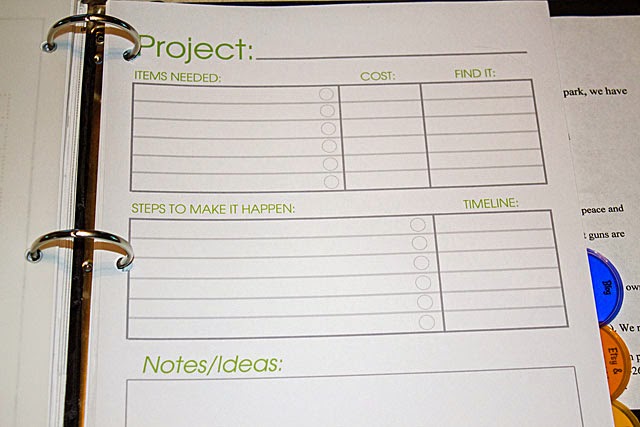 I'm also trying to be more organized with this blog. 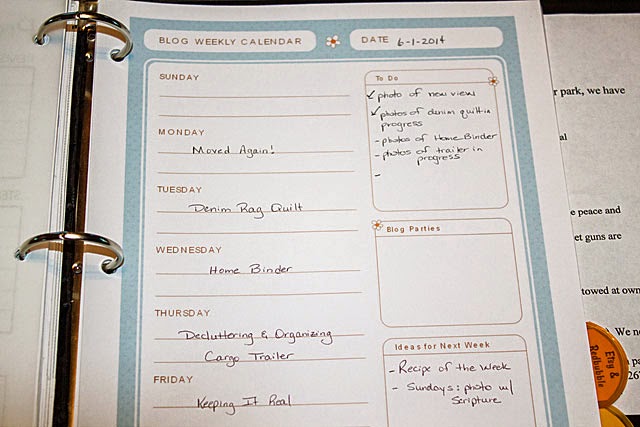 And more organized with keeping track of my Etsy and Redbubble site.  I'm still working on finding a form for this section.  I may end up making one myself although I found one I like and may just end up paying a few dollars for it.  We'll see.

The next section is a list of all the websites I use that have passwords.  Now, some of you may not want this in your Home Binder due to the nature of the content but in our case and situation I feel that it is OK to have this info in here since it's just the two of us in the fifth wheel.  Use your discretion. I just know that I'm finding it more and more difficult to keep up with all the many websites I've registered for and the password used. 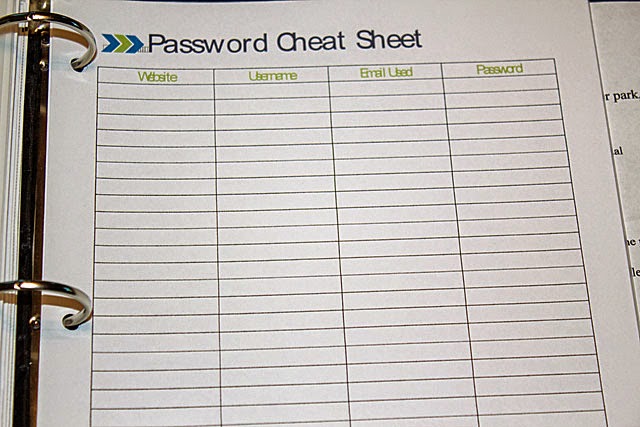 And that's it for the binder!

I also organized the fire proof file box.  Which weighs a ton and is difficult to move around which is why I ended up with piles of paperwork waiting to be filed! 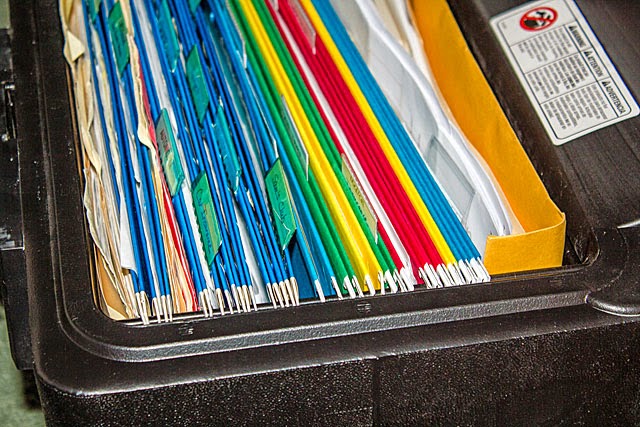 The items that are kept in there are things that I don't need to access very often.  Things like Medical Records, Vehicle Insurance, Manuals, Health Insurance, House Stuff, Taxes, etc.

I've been using this system for about a week now and I have to tell you that I am very pleased with it.  I may tweak it here and there over time but I think taking the time to ponder what I wanted in the binder and the file box ahead of time really helped.

Over time I may also make my own forms so that they are tailored to my needs.  But, for now, I am happy using ones that I found for free online and it saved me a ton of time.  If you're interested in any of the forms I used just let me know and I will send you the link.

How do you deal with your paperwork?

Till next time friends...
Posted by Gone Country at 9:26 AM

Your binder idea is brilliant. I like the U.S. stamps in it and a place for projects. I don't plan meals for the week tho and I pay each bill the day it arrives, so I don't have to handle the papers twice.

Great ideas! I might even be tempted to take paying the bills back from The Hub....but let's not get too carried away too quickly ;) I think you're off to an awesome start. Would like to know how it's going in a month or two.