I've mentioned in previous posts about the ordeal I go through when I decide I want to do some sewing or quilting.  If you missed it here's a recap... go to the bedroom to get the sewing box for whatever thread I need, grab the cutting mat, ruler(s) and the fabric.  On my way to the dining table I will hopefully remember to grab the rotary cutter and scissors. When it comes time to do some ironing it's back to the bedroom to get the table-top ironing board hanging in the closet, stop by the 'laundry room' for the iron on my way to the dining table to set up the ironing board on top of the cutting mat that's already on the dining table.  And my quilting books?  They're above the TV if I need them.  Whew! I'm 'bout wore out just typing this, ha!

So, I started thinking of ways to organize my little sewing corner to simplify my ordeal of preparing to do some sewing.
Here's a before shot of my little corner... 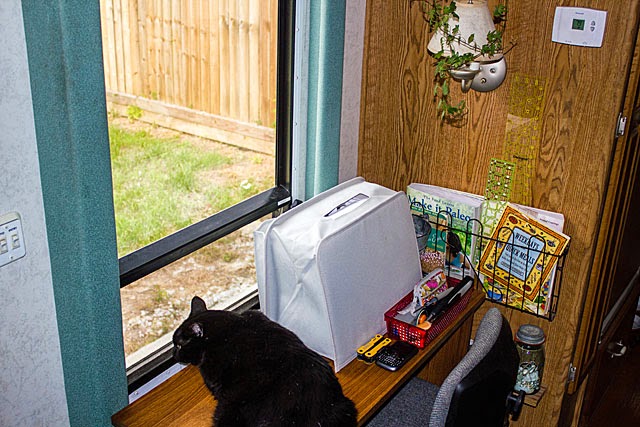 There's not a lot of room but it had some potential for some better use of space.  And, of course, I have to share my little corner with Hunter who loves to lay up there and look out the window!

In thinking about organizing ideas I also had to take into consideration that whatever I did in this area would need to withstand traveling.  I did not want to add to the list of things that need to be taken down, relocated and secured when it was time for us to move again so I had to come up with something that was more or less permanent.

Originally, this corner had a swivel, recliner chair in it so there was already a small shelf and a magazine rack mounted on the outer pantry wall.  But, when I joined CountryBoy on the road I knew I wanted to put my sewing table there so, I moved the chair over by the couch and is now directly in front of the TV.  It's all good (wink)! I still used the magazine rack to hold cookbooks and the shelf was a catchall for little stuff.

A few of the ideas I came up with were to find a new home for the cookbooks and use the magazine rack to put the few quilting books that I've acquired in there.  (I'm still trying to find a place for the cookbooks, sigh.)  And I'm using the shelf for the little red tray that holds some scissors, seam ripper, measuring tape and sewing machine paraphernalia.

I also decided that I wanted my threads near the sewing machine.  I saw this wooden thread holder at Hobby Lobby and thought it would be perfect mounted on the outer pantry wall.  But, it was a self-standing one with legs that swung out. While I love that idea I knew I had no room for it to sit on my sewing table and it would've had to have been relocated and secured when we moved so CountryBoy drilled some holes in it and screwed it into the pantry wall for me.  Perfect! 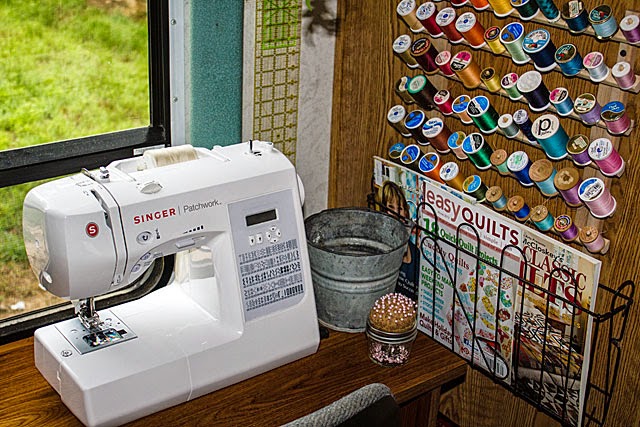 I also wanted my rulers nearby.  Since there is a hole at the top of each of the rulers I decided to hang them on the wall in front of the sewing machine using a simple screw.

Now, I have my thread right where I'm sewing and the rulers are mere steps from where I do my cutting.  Yay!

What's the metal bucket you may ask? It's for all those pesky threads and little fabric pieces I cut off while I'm sewing!

Eventually, I will figure out a way to hang the mini ironing board in the 'laundry room' so it will be by the iron and much closer to the dining table.

The cutting mat and fabric? I will probably keep them in the closet so I won't have to relocate and secure them when it's time for us to move.

I'm very pleased with how it turned out... 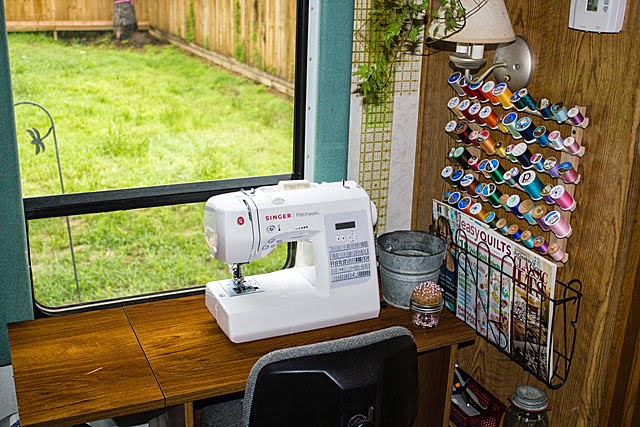 While I would love to see my fabric stash when I look at my sewing corner it's just not gonna happen for obvious reasons. But, seeing all the thread on the wall is just as good and puts a smile on my face!  All those pretty colors!  Makes me want to sit down and sew something (smile)!

Speaking of thread, I have several spools of thread that were my Mom's... 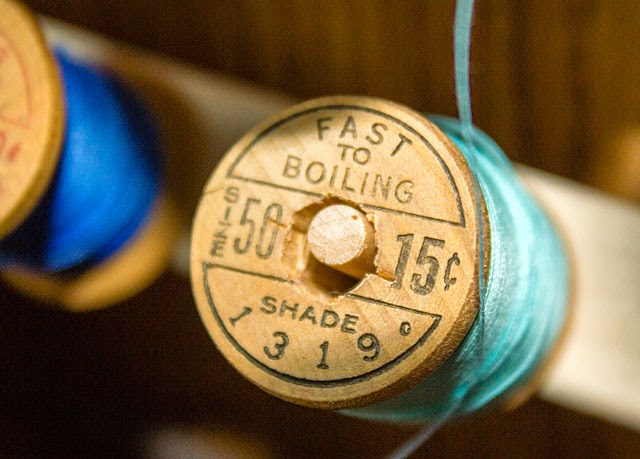 Don't ya just love the wooden spool?  And 15 cents?  Awesome!  I will be saving these spools fer sure!

Till next time my friends...

Beautiful! Now come help me organize mine next week while I'm off (wink, wink)

You've done a great job re-organising your sewing space. I'm sure having the spools of thread to hand like that gives you joy as well as inspires you to create something, especially seeing the old wooden ones. I had a sewing trolley with a drawer for sewing equipment that belonged to my mother, but it took up a lot of room and had rickety legs. I had to give it up, but have managed to reduce items to what I need and put them in a box that folds up if necessary. I also have a wicker sewing box for my knitting material.

Down On The Farm said...

I hopped over from our friend the Coop Keeper!! and I want to wish you a VERY HAPPY BIRTHDAY!! My big one (50) is on July 9th :). I can't believe I'm 50, and yet, I don't feel any different than I did 25 years ago (well maybe I move a little slower, and I require more rest, and and and lol). Anyway, I just wanted to say Happy Birthday to you. I have prayed for you today and asked God to DOUBLY bless you!!! have a wonderful day!!