For many years CountryBoy and I would spend one week of our vacation going on mission trips to Honduras and Nicaragua.  We went with a group from our church where we spent the week building a church in remote villages in those countries.  The villagers worked alongside us with all ages pitching in to help; men hammering nails, children carrying lumber and cleaning up scrap pieces, women cooking for the workers.

The accommodations were primitive at best.  A tent with an army cot, the local latrine (which was built by the missionaries we were working with and provided for these remote villages and were thoroughly cleaned and limed by our team upon arrival), and baths were taken in the river.  The same river where we got our drinking water and the villagers washed their clothes. No worries.  You bathed down river from where you got your drinking water, wink!  (Just don't think too hard about the village up river that is bathing down river, well, you know where I'm going with that! You just hope that the water has been purified by nature by the time it gets to the next village!)

Even with the best luxury item being the latrine it was always a wonderful week and always difficult to leave.

Before heading home our team is treated to a nice meal in one of the restaurants in the more modernized parts of these countries.

One restaurant was outdoors in a very tropical setting.  It was so lush with plants that I felt as though I was eating in the midst of a rainforest.  It was awesome!

I can't remember what I ate for the main course but I remember eating a corn salad of sorts that was on the salad bar.

Seeing all the beautiful corn on the cob at the grocery stores this summer reminded me of that salad and I wanted to see if I could recreate it. 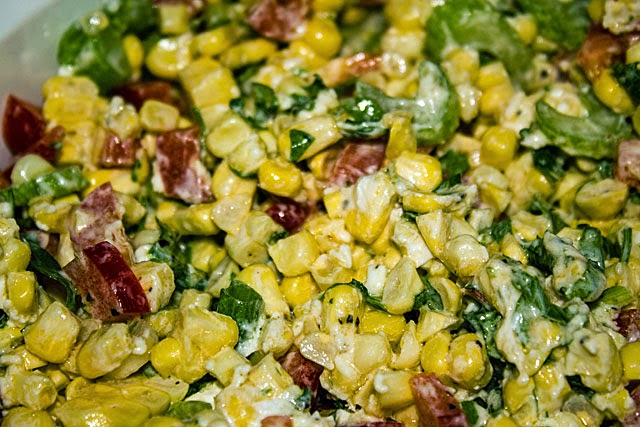 Whisk olive oil, red wine vinegar, sugar, salt and pepper together then pour over vegetable mixture and stir until combined.

That's it!  The crunchy, raw goodness of summer, yum!

There are many ways you can make this salad.  Use what you have.  Add more veggies or different veggies. For those of you that like some heat you can add a diced jalapeno.

Some things I might do differently next time would be to add the cheese last.  Goat cheese is very soft and ended up breaking down making the salad creamier as I mixed all the ingredients.  Same taste you just don't have the nice bits of crumbled cheese.  You could also use a different cheese; blue cheese or feta would be nice. Or you could use a firmer cheese.  Don't like cheese?  Leave it out.  Don't care for cilantro?  Basil would be nice.  I also didn't mix the wet ingredients separately, that's why the measurements are approximate amounts, but that would help cut back on the mixing and stirring so next time I will do that.

There ya have it!  I'd love to hear what ingredients you would use or not use if you made this salad.  Just keep the main ingredient of raw corn then go from there.

Till next time folks...

Sounds yummy! Similar in nature to that PW recipe with the raw corn and grilled chicken, so i bet adding chicken to this to bump up the protein would be tasty too!