I'm not sure about y'all but round here it seems that adding or changing one thing always leads to something else needing to be done.

The latest change was getting rid of the heavy sleeper sofa in the fifth wheel. 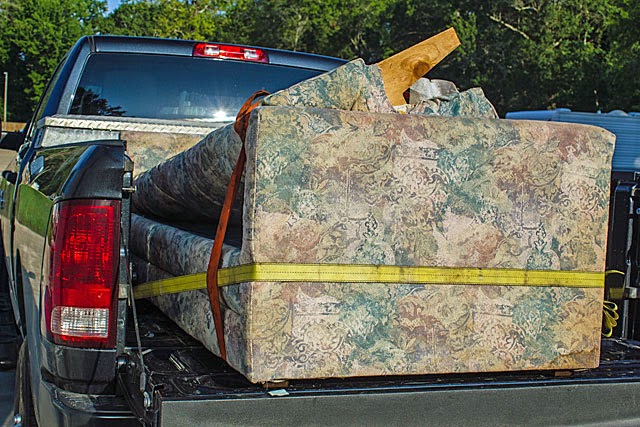 Now I have an empty spot to fill... 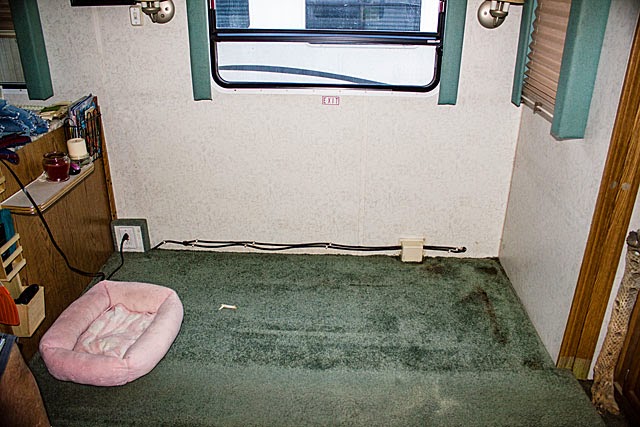 My intentions were to find a futon which would allow for overnight guests to sleep and would also allow for extra storage underneath.

Do you know how difficult it is to find futons these days?

At least the last few places we've lived haven't had any. They used to be everywhere.  Now when I'm looking for one I couldn't find one.  Oh, I could special order one but who wants to special order a piece of furniture without trying it out first?!  Not me.

I continued to stop in any furniture store I came across and finally found one, yay!  (Hee, hee, I made CountryBoy stop at this one store we've been driving by for weeks.  Seeing as none of the previous stores had any futons in stock I told him he could stay in the truck while I went in to look and that if they had one I would motion for him to come in.  He said after I'd been in there a while he figured uh-oh, they must have one, hahaha!  He was right!)

So, over the weekend we loaded up the sofa to make way for the new futon.

We spent hours trying to get rid of this sofa.  Had to get rid of the old one before we could get a new one.  After all, we don't have a garage or any place to store something that large.

Can I just say that I now understand why there are sofas on the side of the roads!

No, we did not dump the sofa on the side of the road but after a couple of hours searching we finally found a large dumpster.  Whew.

And no, Goodwill didn't want it either, ha!

Anyhoo, I'm finally able to get my futon!  Yay!  So off to the furniture store we go that same day.

It sits higher than the old sofa (which is nice for this half-a-century year old lady to get up and down out of!) and the back is higher as well.

Which, ends up being a problem.


Did you notice the window treatments in the above photo perhaps? 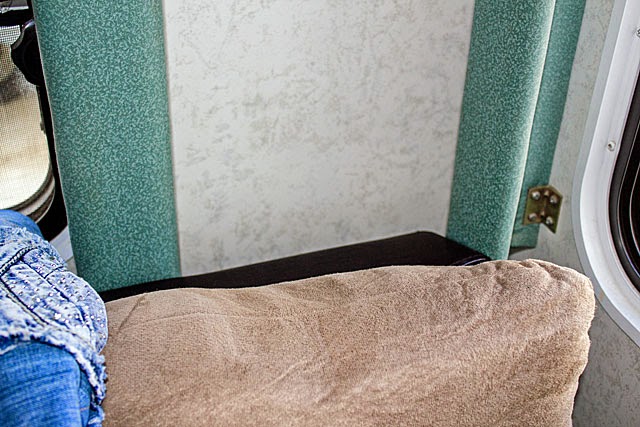 Those side window treatment panels stick out about three and a half inches and are below the back of the futon so I'm losing precious inches of living space.

To complicate matters even more, the strings to the day/night shades are attached to them as well and help to hide the strings.

I never cared for those panels anyway and the colors are definitely NOT my choice of colors when it comes to decorating, so, I decided I would rather have the extra few inches and live with seeing strings then look at those panels any longer. 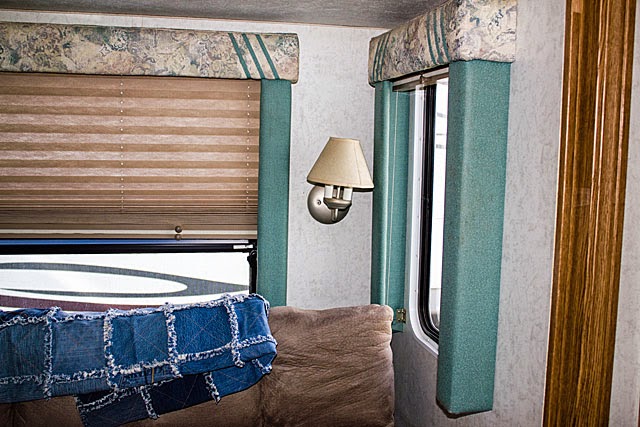 Problem is, if I remove the side panels from these two windows then I have to remove them from three more windows since they are all in the same area.

But, my dislike of those side panels won out over the work involved so I rolled up my sleeves (oh wait, I was wearing a tank top - but you get the point!) and got to work on figuring out the easiest way to remove them.  Let me tell ya, it got real messy and real cramped pretty quick in the fifth wheel once I got started, ha!  Good thing CountryBoy was at work cuz there would've been no room for him!

About the third window I had figured out the easiest way to get it done so the pace picked up a bit even though it took me all day.  (Good thing it was Sushi night last night and I didn't have to cook!) 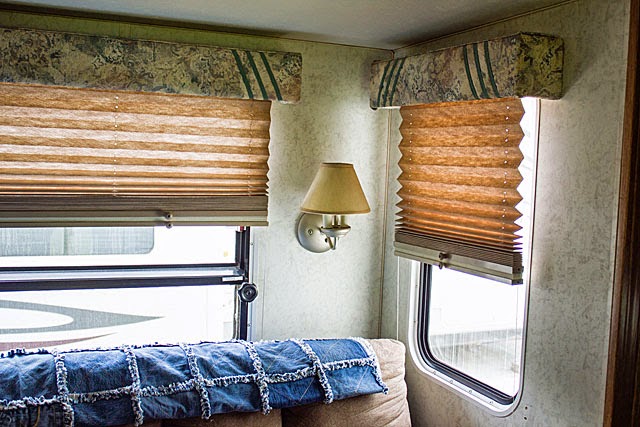 It's a much cleaner and simpler look.

I also gained several inches in my sewing corner as well.  Now, I can sew while CountryBoy is home and he can still get around since I will no longer be blocking the path from the living room to the kitchen.  Happy, happy! 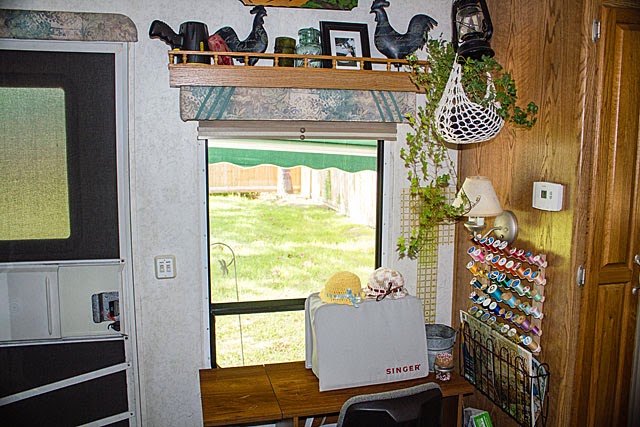 Eventually, I might make some curtains but, for now, I'm kinda liking this look. 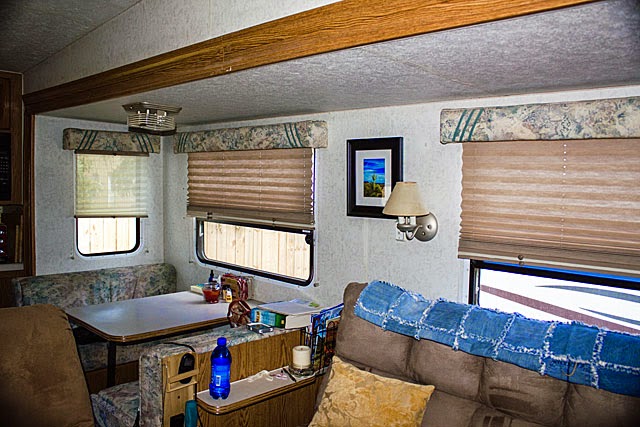 I think by removing the sleeper sofa and the wood side panels we got rid of approximately 125 lbs. of weight in the fifth wheel.  Less weight is always good when traveling.

After a steady day of work LizzieBelle portrays how I felt... wore slap out! She must've gotten tired just from watching me.  Actually, I think she was a little concerned at first since furniture was getting moved around, the vacuum cleaner was out and there was stuff everywhere, ha!  But, we both survived!

I think this particular snowball has stopped.  For now (wink!).

Till next time folks...

I really like the clean look without the window treatments. It opens it up and makes everything brighter! Can't wait to be the "overnight" guest in a few weeks! :)

What a tremendous difference it has made in space and looks by removing the old window treatments! LOVE IT!! Very updated and modern too. I'll bet you are very happy with it, I know I sure would be!

Wow! What a difference removing the panels made! It makes your space look open and airy! Love it!!

I have to agree I like it so much better without those side panels!