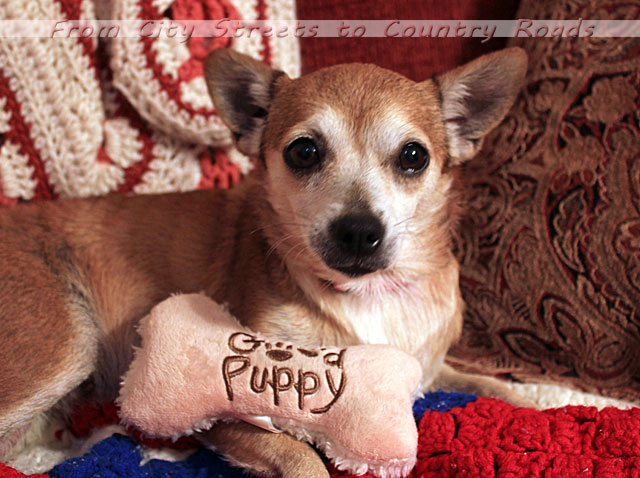 Miss LizzieBelle was running around our church property
for almost a week during Tropical Storm Debby.

She was scared, wet and would not let anyone get near her.

We could see that see she had something going on with her backside
so I offered to take her to the vet and get her checked out if we were ever able to catch her.

Our Pastor put food and water out for her and eventually
LizzieBelle let him pick her up almost a week later.

I took her to the vet that afternoon for a quick checkup.
He estimates she's around five years old.
She had fleas, was in heat and had a yeast infection.

I left with a flea pill and some shampoo for the yeast infection. 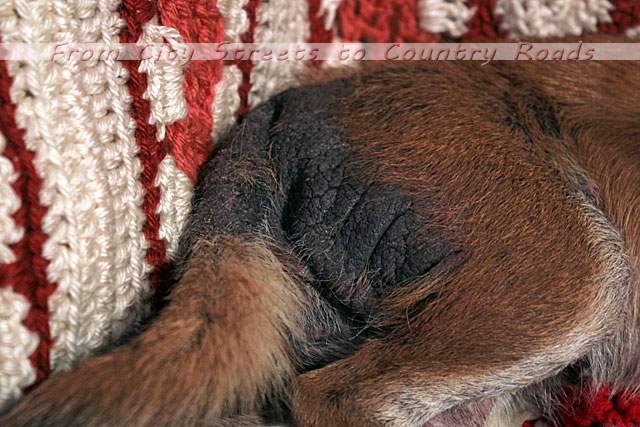 The above photo was taken about a week after her vet visit and several shampoos
but initially, the swelling was so bad that you couldn't even see her private parts.

At the beginning of the vet visit the vet was encouraging me to find the owner.


I said I would post pictures around town (even though I felt the owner didn't
deserve to have her back if they weren't going to care for her medical needs).

By the end of the visit, the vet was no longer encouraging me to find the owner.
Apparently, he felt as I did.

Her recent visit to the vet to get her shots determined that she also has heart worms.
We will be treating that now starting on Wednesday. 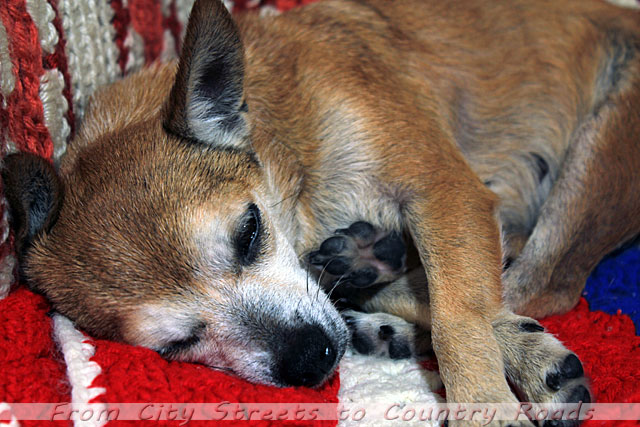 She is such a good, sweet puppy.
She tolerates and cooperates during her many baths
(especially when the shampoo has to stay on for 15 minutes).
She only barks if a stranger comes to the house.
She loves going for walks.
She's a lap dog.
And, I think she's happy she's getting the care she needs.

If you're wondering about her name, Lizzie just popped into my head one day
and Belle came from the old Taco Bell commercial
where the Chihuahua said "Yo quiero Taco Bell"!
That's what I think of every time I look at her, hahaha!

LizzieBelle seems to be a sweet dog, wonderful you have taken the time and expense to love her back.

aww. poor baby. i hope she fully recovers to full-strength under full care and love. :)

Oh poor LizzieBelle....heart worms too? Bless her little heart. She has found a wonderful new Mommy to love her through this. :)

She is really a sweetie.

As we'd say here in Louisiana, "Cher bebe!" Poor baby. You are an angel to rescue and care for her. I've always said rescue dogs make the best pets. I have three right now to prove it! Wishing LizzieBelle many happy years with you. Bless you.

Oh LizzieBelle, it looks like two angels met and will be very happy together! Blessings to you both!

Oh poor girl ! As soon as I read she barked at a stranger coming to your door I thought to myself she has found her forever home with you . Thank you for taking her to the vets and bring her home , I would do the same thing If I found a stray and or injured pooch , it breaks my heart thats some people dont feel for animals as we do !

You're a blessing to that cute pup! I think what you've done is awesome:)

Poor little girl...but I'm so happy you found her (or she found you) !! She looks very happy to be with you.

She is a sweetie. Enjy each other!

Oh my. I ♥ LizzieBelle! And her story! I'm so glad she found you. Bless her heart! And yours for giving her such a loving, caring home :) -Tammy