Have you seen the movie The Lord of the Rings?

If so, then you're familiar with the phrase from Schmiegel where he stares at the ring and says "my precious".

Well, my Precious is not an inanimate thing, she's a soft and squishy, cuddly cat... 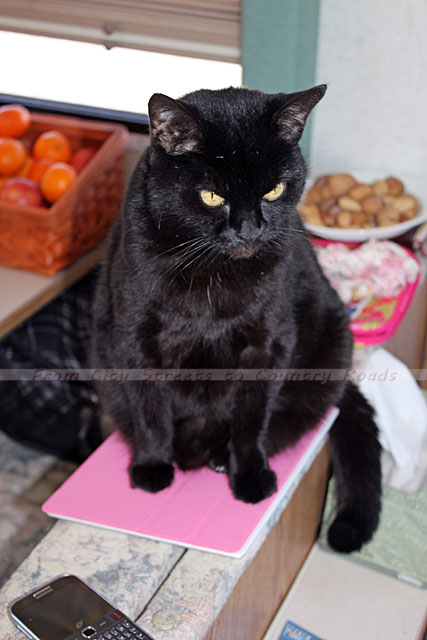 and she's sitting on my iPad!

She's the eldest of our animals at eleven years old.

We adopted her from the SPCA where we used to live when she was eight weeks old.

Someone found her on the side of a busy highway as a newborn kitten and brought her to the SPCA to be cared for.

We first saw her when she was only a couple of weeks old and CountryBoy fell in love with her.  Had to have her.  So, when she was old enough to be adopted she became ours.

She's a sweetie pie and a talker and always has something to say!

She's adjusting to life on the road.  She would love to go outside and meander around though like she did back home on the 'farm' but it's too large a space for her to wander around.  There are also too many wild varmints like coyotes and foxes out there as well.

We tried one of LizzieBelle's harnesses on her for size.  Thought maybe we could teach her to walk on a leash. 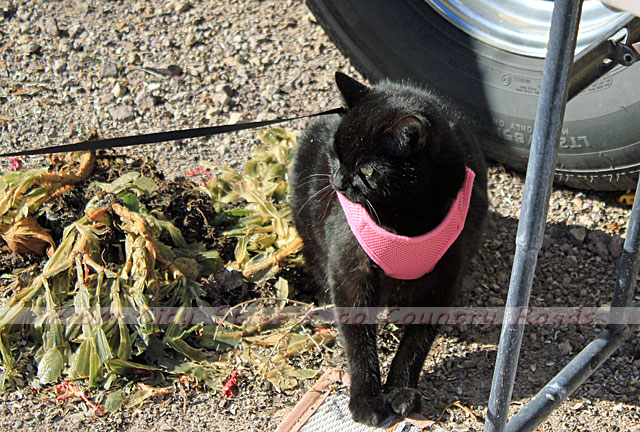 She did OK for about one minute.

Then, she became Houdini and pulled her head and feet right out of the harness in one swift movement and went underneath the 5th wheel leaving CountryBoy holding an empty leash and harness.

Her eyes were HUGE!  What an enormous new world for her.

I managed to get her and put her back indoors.

She still wants to venture outside but she'll have to wait until we get a harness that fits her.

For now, she'll stay indoors and lay by the screen door and watch the birds at the feeder and continue to be My Precious girl!

Email ThisBlogThis!Share to TwitterShare to FacebookShare to Pinterest
Labels: Precious

she's much less creepy than that movie thing. :)

I think you'll have an interesting task getting her used to the harness:@)

She's gorgeous. Especially in pink.
I like the harness idea. Better safe than sorry.

Awwww....poor Precious! I hope you can find a harness that she can't get out of. Now Hunter....that one would be fun to watch! LOL

Pretty kitty ! Our Harley is a talker as well she was a stray 4 years ago and we tryed the same with a cat harness but she wriggled out of it and to this day never wants to go outside but she loves to sit in an open window ! Hope you find a harness for her and all works out well. Have a good day !

She is a beauty! I'd say it is something for her to get used to being away from what she's always known.

We have a cat that looks like he could be her twin brother.:)

I've never seen that movie. I guess I'm the only one. :/ But I'm glad you leash your cat when outside. Keeps the birds and the cat safe. :)