If you own your own home, then you know that there is always something that needs to be done around it;  whether it's general maintenance, repairs or even upgrades.  You also know that it never ends.

The same holds true for our current home, the 5th wheel.

It's fifteen years old and although the previous owners took excellent care of it there are still some things that need to be repaired or replaced simply because of its age and the nature of its use.

For example, while CountryBoy and I were enroute to Idaho this time last year, the outside refrigerator vent cover blew off leaving an ugly 'hole' in the side of our camper... 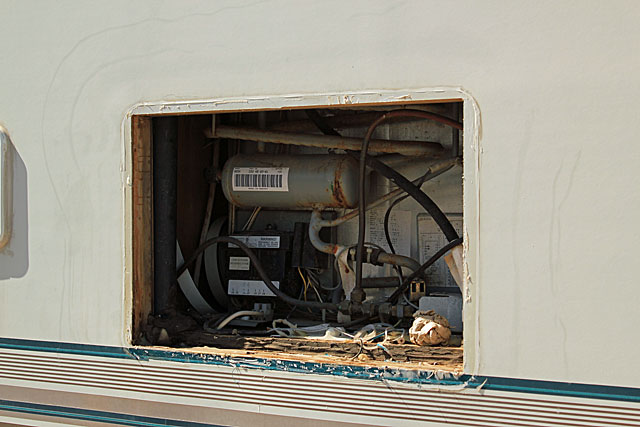 It was this way for a year enduring snow, rain and harsh sun.

We thought we were going to have to have a cover custom-made but after doing a little sleuthing (by measuring our neighbor's vent cover (don't worry, they're family! ) and looking in a parts book, I discovered that the covers are universal depending on the make of your fridge.

I called the nearest Camping World and they had them in stock, woot!

CountryBoy took the remaining frame off and took it with us to make sure it would fit. 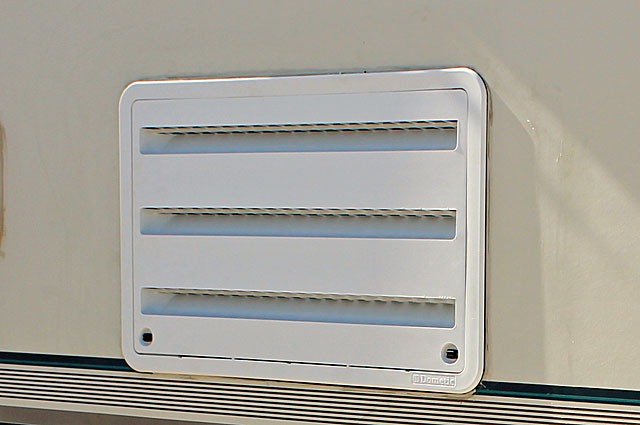 Now we don't need to be as concerned about the wood rotting and our fridge will work better since its components aren't exposed the harsh weather and heat come summer.

We also had to replace the handle assist outside the door.

I had Miss LizzieBelle hooked to a lead that was secured to the handle.  All of a sudden, she got a wild-hair and started running back and forth.  I was encouraging her to play and run around when suddenly she took off running towards the desert.  Or so she thought!

The lead is pretty long so she was able to get up some speed.  At least until the lead ran out.  Then she was instantly stopped.  She turned to look at me with such surprise!  Don't worry, she wasn't hurt by the sudden stop, probably because the plastic piece at the bottom of the handle broke off.  I was amazed that her little twelve pound body created that much force. 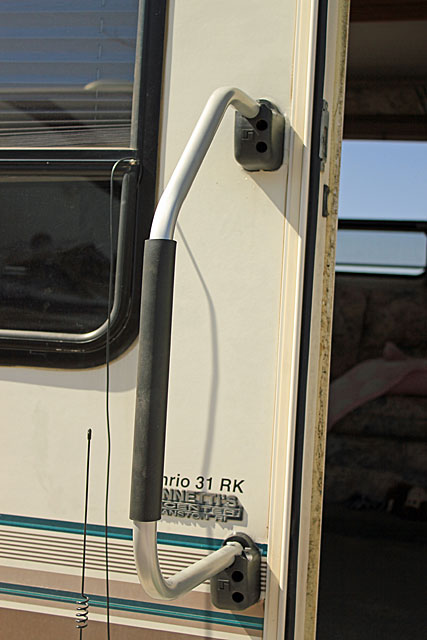 Another necessity were tire covers to keep the tires from cracking and dry-rotting; a sure way to have a flat while traveling. 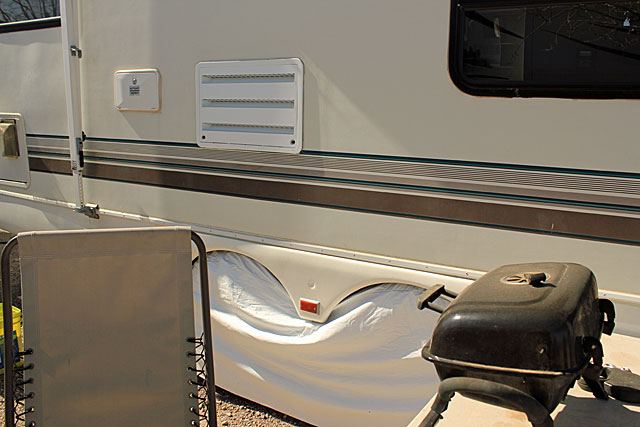 And then there's simple cosmetic fixes like the carpet on the steps... 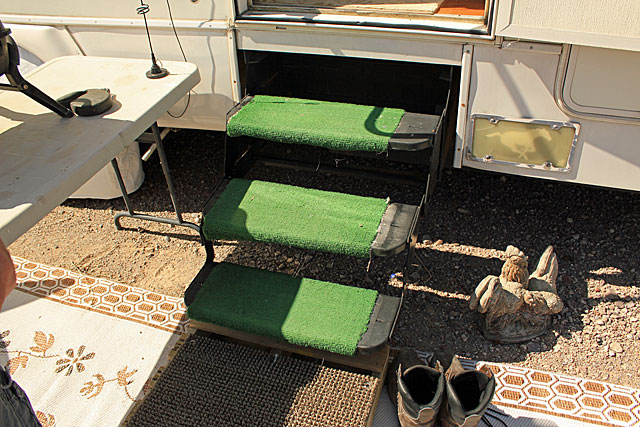 Green, outdoor carpet that was thin, shabby and worn and really did not help much in keeping the rocks and dirt out.

I replaced it with tan carpet that matched the floor mat I recently bought and secured to the pallet at the base of our steps. 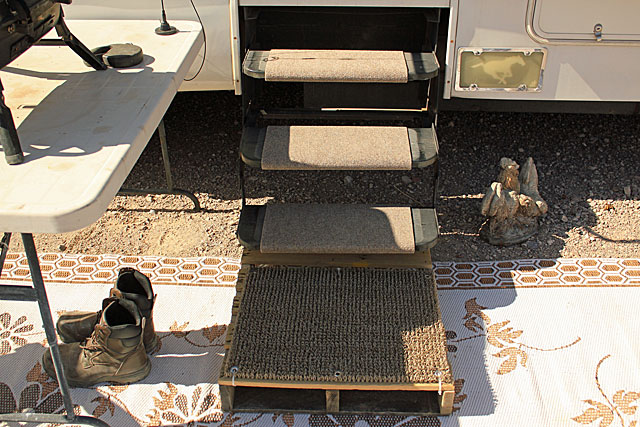 Much better both in appearance and functionality!  (Notice my concrete chickens?  Gotta have my chickens!)

I also repaired a broken slat on the pallet by screwing a metal bracket to the two pieces.

These were a few small fixes but they made a huge difference to the overall appearance of our camper and our little space.

Here's a midway through the improvements (tire covers and handle are already on)... 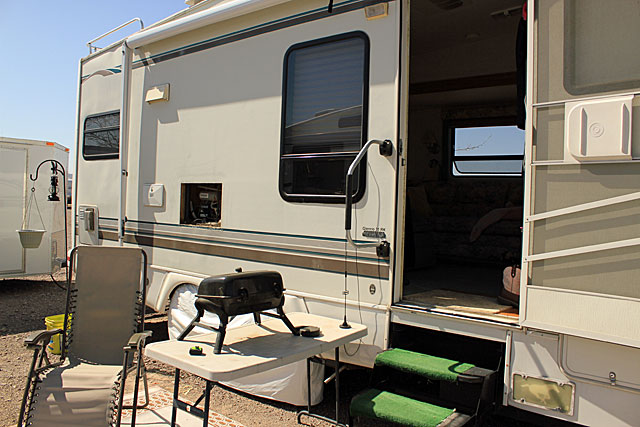 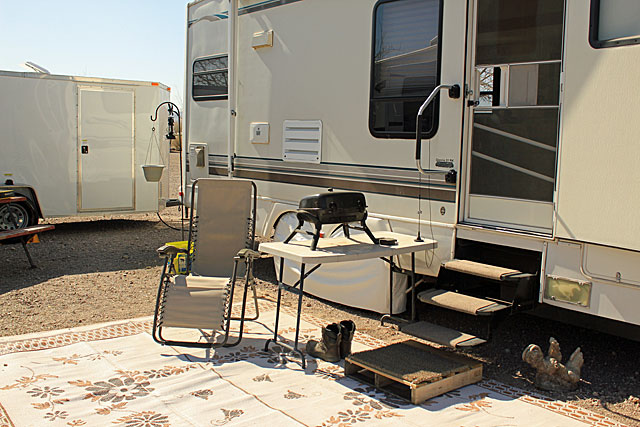 Everything is like new again (until the next necessary repair!) and even matches (that just happened. , thankfully!  Although I did choose the tan carpet to match the tan floor mat on the pallet; does that count?! I just didn't realize that it would also match our chairs and outdoor carpet.  Oh, AND the chickens!)

I hope y'all have a wonderful weekend!

Y'all are becoming so handy! I'm glad you were able to find a cover to fit and the new carpeted steps really spruced up your entry. Enjoy the weekend!

The new vent and carpet made a world of difference! Mom & dad has those same camp chairs. :)

Everything looks good. You must be pleased that you could get things fixed, especially the vent. Hope you have a good weekend.

How awesome! It does look like a new one.