Is that actually a word?!  I don't know but I like it and I'm going to use it today!
I must have been more exhausted than I thought from the Mini-Mother's Day-Makeover that my sister, Country Boy and I did this past weekend because I had the hardest time waking up this morning!  I should have brewed up some fully loaded coffee this morning... decaf just didn't cut it!  Speaking of... I think I'll go brew some now; yea!  Oh, and it will be decaf because I SURELY don't want to be up all night!  I'll be right back...
OK, I'm back!  I tried something different... adding a teaspoon of Stevia to my otherwise black coffee.  It's not bad but I think I'll stick with black for now!  I normally use just cream but the diet that we're on does not allow for that *sad face*!  BUT, the good news about the diet is Country Boy has lost a total of 11 lbs. and 1.5" around the waist and I have lost 6.2 lbs and 5" around the waist in just one week!  And, we're feeling great!  Yippee!  I can do this for another four or five weeks!  I'm so happy to be fitting into my clothes a little more comfortably!
~~~~~
I spent the morning catching up on the blogs I read after not blogging all weekend!  Lots of good stuff out there. I love Bloggerville!  Lots of great people, good ideas and just pure enjoyment!  Then it was time to make a grocery list.  There are not a whole lot of things we can eat right now but I spent time reviewing recipes and coming up with ideas for some variety.  I was also waiting to see if a neighbor was going to give me a call.  She's a wonderful lady whom I think of as my own Grandma especially since both of mine have passed.  In fact, that is what I (and several of the neighbors) call her.  I just had a feeling she was going to call and if so, I was going to see if she wanted to go out to lunch and stop by the grocery store.  She did indeed call so I finished up my grocery list and we took off to town.  We had a nice salad at Wendy's (I took my own chicken and salad dressing!) and then it was off to a produce stand, the Christian bookstore and then Winn Dixie.  We had a great time visiting and a couple hours later I dropped her back home.
~~~~~
I am trying to get motivated to get some more items ready for the yard sale.  I really don't know why I have been so lacking in the motivational department lately.  Usually, I have an overabundance of it (just ask Country Boy!).  But, for whatever reason, it's gone missing!  I need to find it quickly though since we're planning on having it in the next couple of weeks.  Yikes!


~~~~~
Today marks the day when I got my 25th follower!   I was thrilled!  I always get so excited when I see a new follower... like a kid in a candy store!  And Thanks to all my followers!  You are awesome and your lovely comments are what keeps me motivated to keep my blog going!
~~~~~
Enough of the randomness... I promised you some more photos from our fishing trip last week.  Enjoy!
We hadn't gone very far down the river when this little (approx. 3-4 feet) guy popped up out of nowhere!  We heard him earlier (it's mating season so there is a lot of grunting going on!) but didn't know where he was. 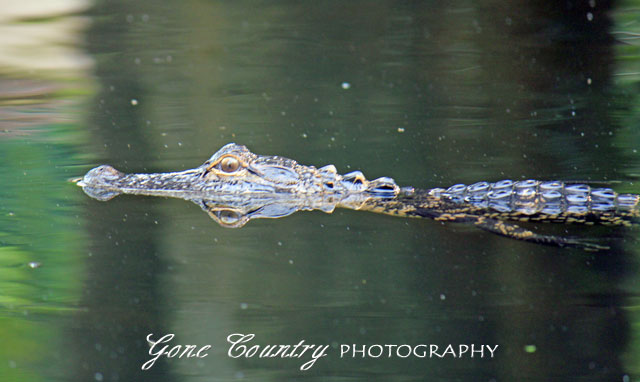 He was about eight feet from our boat and he was keeping an eye on Country Boy's cork. 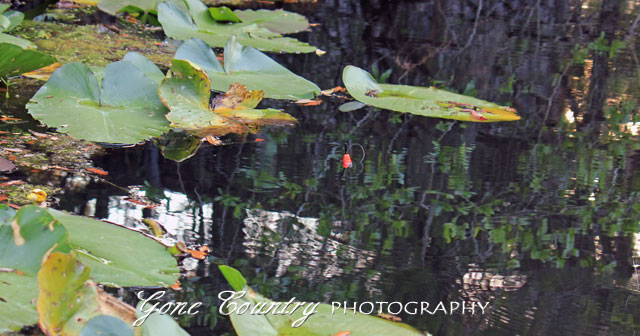 We thought he was waiting for 'the catch' and would grab it when Country Boy pulled it up but all of a sudden... 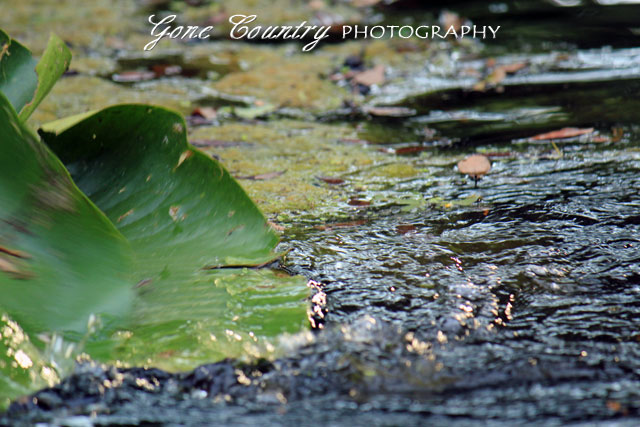 He lurched forward and chomped down on the cork!  It happened so fast that this was all I could get!  During Country Boy's attempt at trying to pull the cork out of his mouth his cane pole broke and needless to say, the gator got to keep the cork!  Already such excitement and the day had just begun!
As we headed further down the river, a huge raucous started. 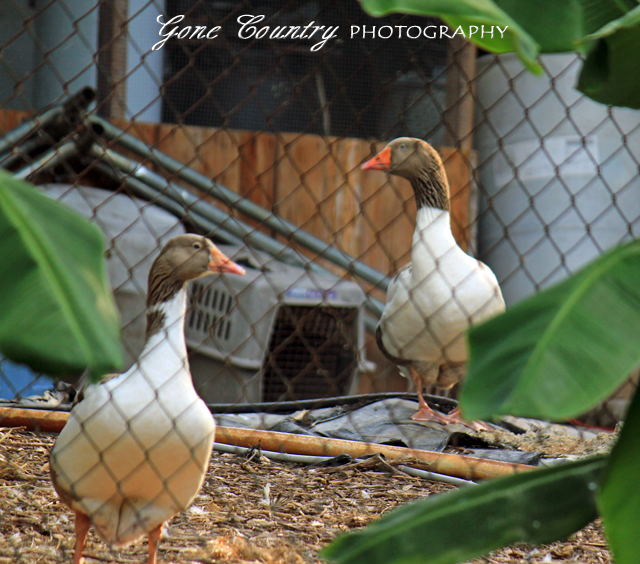 There were several geese in someone's backyard and they were just a-squawking up a storm.  They make great watch-dogs, er watch-geese!  After a bit they all settled down and all was quiet again. 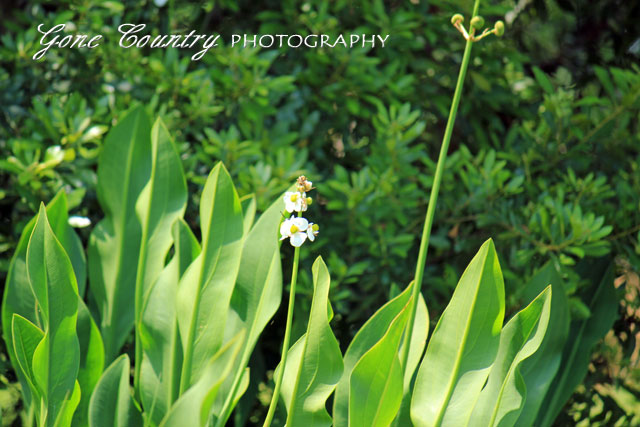 Some vegetation along the river bank. 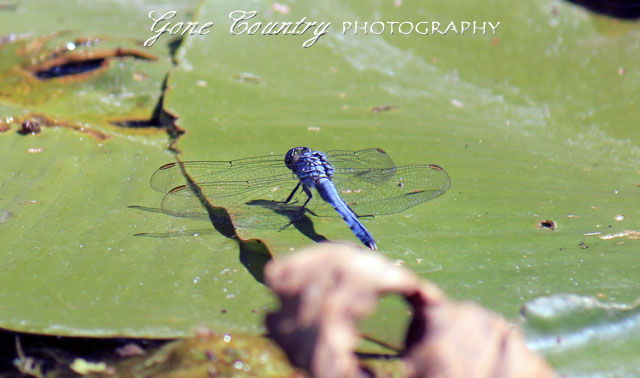 A dragonfly chillin' on a lily pad! 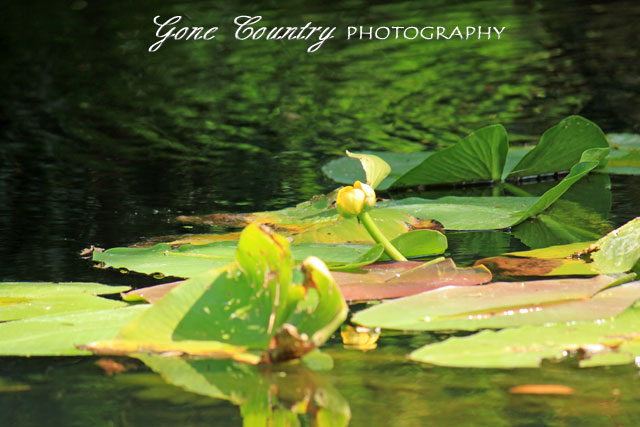 As I mentioned before, it was very difficult getting decent shots when there is constant movement on a small boat!  But, I like how the wind was lifting up the lily pads! 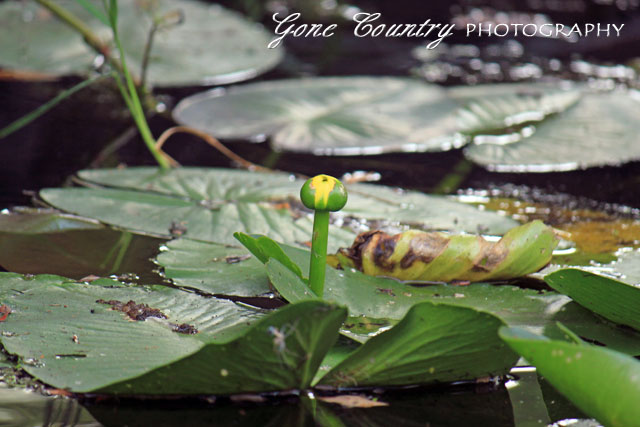 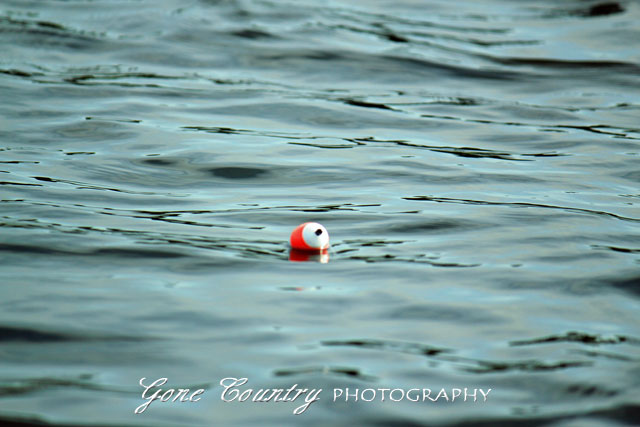 This is the second cork!  We were out on the lake now and the wind was picking up.
I have more to show you but I'll save the Common Moorhens and the Limpkins that we saw for another day!
I hope you enjoyed my randomness!
Till next time,

that alligator is pretty awesome! wow! all of your photos are great, as usual! congrats on getting more followers - you deserve many, many more!

Great photos! Congrats on the weight loss to you both!

Honored to be your 25th follower! You keep on blogging -- your photos and posts are wonderful!