Not a very interesting title, but my brain is going 90 to nothing and that's the best I could do.  What's one to do!

Since I have so much to do today before my CountryBoy comes home tonight (YAY!!!!!) let's get right to the update shall we?

Hunter is recovering nicely from his declawing surgery last Wednesday.  I know, I hated to do it to him but I figured it would be less stressful on everyone in the 5th wheel if he weren't tearing it up.  He got his last dose of pain medicine this morning but still has four more days of antibiotics twice a day.  He takes his pills rather well for a cat.  I have found that giving them to him while he's lounging on the bed on his back (don't worry, I put him down when he's ready to get down rather than letting him jump) is the easiest way.  I open his mouth and because of his position, the pill goes to the back of his throat and he swallows it right away.  Whew!

Here's Hunter before his surgery lounging in LizzieBelle's crate.  I was thankful that he went in there on his own before the surgery because he had no problem going in there afterwards to rest rather than jumping on the bed.  He was able to come and go in there since I never closed the door but he seemed to be content.  I think he was just trying to get LizzieBelle's goat by sleeping in there! 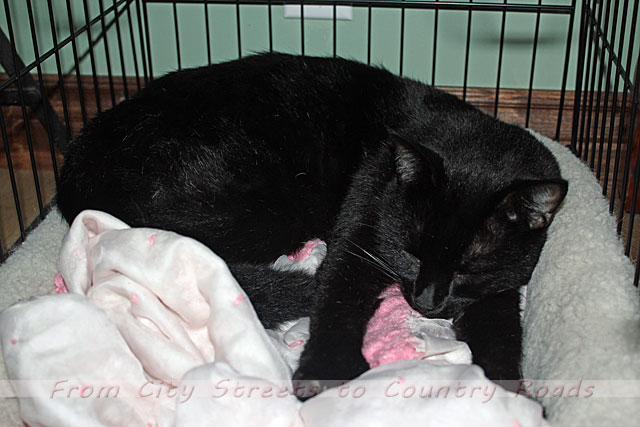 He is walking around  fairly well now and is dying to go outside.  Unfortunately, his days of being outdoors are over.  If I hadn't used up most of my brain cells with this move I would have started to train him in the litterbox before his surgery but I just didn't think about it.  So, he had to learn how to use it afterwards and finally gave it go last night.  In fact, he was the first to use it even when our older cat knew how to use the box from days ago.  He's such a good, smart boy!  I have to pick up some more special litter that has to be used for ten days.

The trailer is here!  I drove yesterday from Central Florida to South Georgia to pick up the cargo trailer that I had ordered online.  Do you know how scary it is purchasing something online and adding options and yet you've never physically seen the item that you're purchasing and have to trust that it's not a scam?!  Yea, I was a little nervous but I had to trust the Lord that all would work out well. 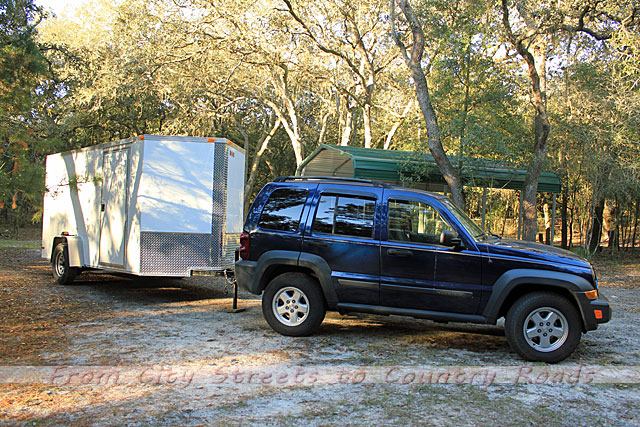 And, it did.  There was a little setback when we tried to hook up the trailer because of the spare tire that is located on the back of my Jeep.  Once we were able to get the tire off (another problem because of a special lug nut for avoiding theft) there was no problem getting it hooked up.  But, while I was hooking it up, I noticed a defect at the bottom of the shaft that raises and lowers the trailer.  It was all smashed in on one side.  They graciously changed it out and then I was on my way.

The Jeep handled the trailer really well.  It was extremely windy yesterday yet the trailer hardly swayed at all.    The traffic on the interstate was horrendous from the moment I got on it until the moment I got off.  Nothing like getting practice pulling a trailer in thick traffic right off the bat!

Overall, I am pleased with the trailer, the options were put in correctly and it was a good purchase.  It wasn't all peaches & cream along the way but, in the end, it all worked out!

Now, I will buy some shelves to put on one side of the trailer for vertical storage.

Half of the line posts were installed yesterday.  The guys will be back tomorrow and Monday to finish it up.

I don't even want to go there.  Still so much that needs to be packed.

CountryBoy flies in tonight, YAY!!!  Even though I have so much to do before going to pick him up, tonight just won't get here fast enough!

All store-bought gifts have been purchased.  I still have a bit more to do on the handmade gifts.  And yes, I  know there are only THREE more days until Christmas! 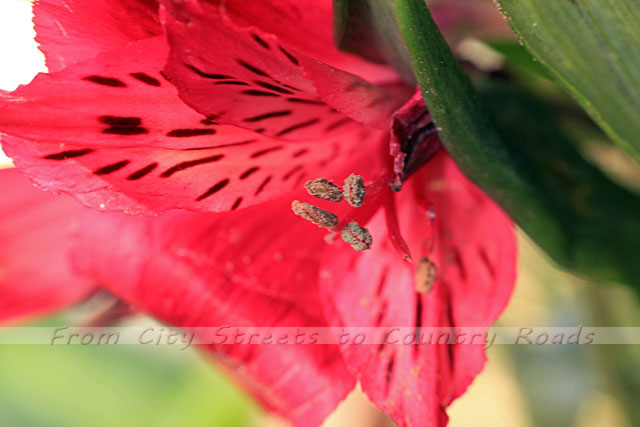 Another abstract flower shot from one of my bouquets.

I hope y'all have a great weekend!  Mine, will be busy...

Sounds like things are coming together. I'm so impressed that you not only ordered thr trailer, with options no less but you actually pulled it home. I have trouble backing my Mini ou of the driveway trying to miss the posts. Hope your Hubby gets home safely. Ronda

Boy, you've been busy!! Hope your Christmas was blessed and the new year as well. Glad the cat is doing okay, post surgery. Hugs!

Glad things are coming together for you! Hope you had a lovely Christmas. :)